Ex-Caritas chief for Egypt and former "Caritas Internationalis" Council for North Africa and the Middle East: "The West and the Pope do not know the true nature of Islam"

Budapest-Wien (kath.net/KAP) The well-known Jesuit Henri Boulad has been one of those voices for years, warning against a spreading Islam. A few weeks ago, the long-standing Egyptian Jesuit Provincial and director of the Jesuit Cultural Center in Alexandria has now accepted Hungarian citizenship. In order to support the restrictive migration policy of the Hungarian head of government, Viktor Orban, and to exert a corresponding influence on the European immigration policy. This is what the 85-year-old Jesuit from Alexandria declared in an interview for the Hungarian weekly newspaper "Heti Valasz", the text of which was published by the Austrian magazine "Kirche In" in his current May issue in German.

During an Egyptian visit to the Hungarian Deputy Prime Minister, Zsolt Semjen, Boulad said that he wanted to be granted citizenship. The request was made by decree. In the middle of March the Jesuit spoke the oath at a ceremony in the Budapest Parliament. With the assumption of Hungarian citizenship, he wanted to "signal that the country led by Viktor Orban has made the right decision on the issue of the migration crisis that threatens the existence of Europe," said Boulad. "I would like to (...) fight for the future and for the Christian values on the side of the Hungarians and Viktor Orbans," explained the Jesuit.

In principle, support for refugees and poor is "right and good," said Boulad, " The Church had adapted itself to the views of the French Islamologist Louis Massignon (1883-1962), for whom mystical Sufism had meant the essence of Islam. Islam, however, historically chose not the "Meccan," but the "Median," path that still determines it: "The surprises of the Koran, which appeal to unbelievers with violence and jihad, are from the Medina period [The prophet Mohammed, note], the tolerant, msystic surprises of the Mecca period."  "Rome," said Boulad, "does not understand this, and the Christians of the East, who know Islam from the inside, are not asked, they are put to the side." According to the Jesuit, the Catholic Church is based on the expertise of "Experts in Paris, Berlin, or America who are regarded as great Islamic scholars, whose views are purely academic," and thus "fell into the trap of the Christian-Islamic dialogue, which in reality resembles a dialogue of pigeons." Boulad sees this dialogue, even after 50 years, "is still at its starting point."  Big announcements about reforms in Islam have hardly any consequences.

The Jesuit also complained that there is little dialogue with him either, and French and Canadian bishops have banned him from entering in their countries. "Masses of moderate and intelligent Muslims and Muslima think like me. They are trying to destroy Islam to save Muslims and Muslims," Boulad said in the interview. The Liberals of Islam are "faithful to the beauties of their religion. In order to preserve and defend them, they want to free themselves from the imposed dictatorship." 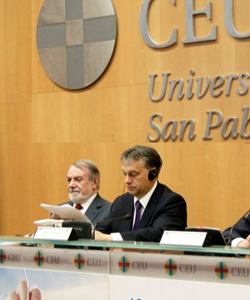