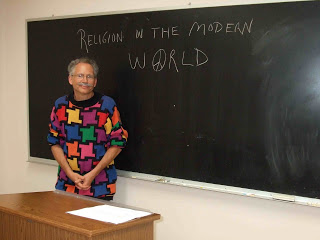 Edit: people have been asking about what it is about EWTN that might make them anti-Semitic.  We suspect that it has to do with certain EWTN personalitys' demonic hatred for fellow Catholics who truly are Semites.  We shudder to think what these alleged champions of Catholicism at the Network Gone Wrong, would say of Arab Catholics who are not only Semites, but are suffering terribly in Palestine till this very day at the hands of the Israeli state.

Kevin O'Brien is an EWTN celebrity who is most well known for his portrayal of a profoundly disturbed fruitcake theology professor named Stanford Nutting who not only claims there is no truth, but is also deeply interested on punishing those students of his who believe there is.

Ironically, here he is in a real-time conversation on Facebook, seemingly his real self, Kevin O'Brien.  Unless he's lost his grasp of reality, and we suspect he has,  he presumably is not in character.   Art imitates life.  He has certainly taken it upon himself to defend a group of people that probably doesn't hold him in high regard (Israelis) and might be a little offended too at his misplaced zeal, but here he is.  The following is a discussion between Paul Moeller and Kevin O'Brien which took place in mid-April in a public forum, where Mr. O'Brien loses his composure and became verbally abusive and frankly, slanderous, and worst of all, anti-Semitic.

We've censured his bloopers but felt it was necessary to portray the kind of person EWTN has working for them.  Here he is denying the holocaust... of the Chinese at the hands of the Japanese during World War II: