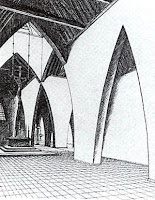 His friends and family will return to Collegeville next week to mark the Nov. 9 anniversary. There will be public events to remember Guimond, and to demand answers.

On Saturday the inaugural "Justice for Josh" march will be at noon near St. John's. There will also be a march at the Stearns County Sheriff's office at 2:00 p.m.

The family maintains that Guimond was taken against his will, and they're asking the sheriff's office to release all the information it has on the case.

Sheriff John Sanner says his office has spent thousands of hours on the case and he's just as frustrated as the family that it hasn't been solved.

The fading Monastery, Saint John's Abbey in Collegeville has been the home of many revolutionaries both political and cultural. Its numbers have been, predictably, declining steadily over the years, perhaps owing to this singular but all-too-common fact that Catholic religious orders, in so far as they have departed from the vision of their founders, are dying. It shouldn't take a sociological study to know that the students who matriculate from the college know nothing of the School's proclaimed religious affiliation when they leave, and if they were Catholic to begin with, many are not by the time they do depart with a diploma in their hand on the way to success and family.

In the mechanics of espionage there is no better cover than a monastery or a pastorage. There have been many suspicious figures in St. John's history, who've either been involved supporting insurgencies against American interests in Central America, putting on disgracefully vulgar plays like Vagina Monolouges at the neighboring women's college, St. Benedict, or featuring irreligious works by Bauhaus architects at great expense and atheistic calligraphers for 30 pieces of silver. From Vatican Peritus, Father Godfrey Diekman (Reformer, Revolutionary), Br. Frank Kacmarcik (artist), Fr. Virgil Michel (Social Reformer, Philosopher, Liturgist), late Senator Eugene McCarthy (Liberal opponent of Vietnam War), reclusive artist Fr. Jerome Tupa there are an entire host of suspicious and curious individuals both past and present working toward the emasculation of American Civilization and Religion.

It's not surprising then that one of the students should go missing and given the Abbey's difficulties with regard to orthodoxy and continence, it's not surprising that events like this sadly take place, leaving a bereaved family and an increasingly sceptical surrounding community.

* Joshua Guimond disappeared while at St. John's University in Collegeville, MN in 2002.

* November 7, 2009 is the inaugural "Justice for Josh" march and will take place at noon.

* St. John's recently denied a request by the Guimond family to mark the anniversary with an on-campus walk to raise awareness, claiming such an event "would not be productive".

* The seven year anniversary of Joshua's disappearance is November 10th.

* Supporters will meet near St. John's University at noon, followed by a march at the Stearns County Sheriff's office at 2pm.

* Several facts and new information regarding Joshua's disappearance will be made public during the event.

In 2002, 20 year old Joshua Guimond left a small card party at a friend's apartment on the St. John's University campus in Collegeville, MN around midnight on November 9, 2002. His friends believed he was just making a trip to the bathroom, but when he did not come back after 15 minutes, they assumed he had just walked back to his dorm room. He has not been seen since. Joshua did not have his glasses or contact lenses, his car, credit cards, or even a coat that was appropriate for the weather. Nothing was missing from his dorm room. His parents remain convinced that he was taken against his will.

Joshua Guimond's family along with supporters, advocates and other victims of campus crime are flying in from around the country and uniting to remember Joshua. A petition will be presented to the Sheriff demanding accountability.

St. John's University recently denied a request by the family to begin the Justice for Josh march on campus, at the site where Joshua was last seen. According to University representative Shawn Vierzba, such a march, "would not be productive, and that the speculation and conjecture likely generated by such a march could in the end be more harmful to the efforts to find Josh".

According to Joshua's father, Brian Guimond, "One of several new facts regarding Joshua's disappearance that we need to explore involves 11 known sex offenders who resided on campus when Joshua disappeared. If that is the case, we may never know the truth. The University and Abbey have a long history of withholding information from the public and law enforcement authorities." The actual
number of sexual victims would appear to be 100 plus. The public needs to be aware of this..

The march will continue at the Stearns County Sheriffs office, where organizers will demand that law enforcement agencies release all information regarding Joshua's disappearance and that St. John's immediately release the names of all personnel who have had credible assault allegations made against them. A dinner and prayer service will follow. Copies of the full schedule and applicable documents will be made available online and on the day of the march.

More information: http://www.findjoshua.com
Posted by Tancred at 1:00 PM No comments: