In Slovenia, citizens have rejected same-sex marriage  - and declared themselves against the equality of homosexuals.  Opponents of the law received, according to the State Election Commission, more than the legally required number of 342,000 votes.


The Slovenian parliament had allowed same-sex couples  the right to marry and adopt children nine months ago. The conservative opposition and the Catholic Church had then forced the vote. The vote was also declared by them as a vote of no confidence against the government of Miro Cerar, who proposed permits for marriages of homosexuals.
Church and opposition groups rejected the law because it threatens traditional values ​​in their view. Opponents argue that only a relationship between man and woman could give children a happy upbringing.
BRK / dpa

Trans: Tancred vekron99@hotmail.com
AMDG
Posted by Tancred at 9:35 AM 2 comments:

A Progressive Referendum Against Homosexuality in Slovenia

Slovenia.  A progressive citizen's initiative in Slovenia has enough signatures collected against a homosexual law of June 2011 in order to bring a referendum to a vote.  The signatures were presented to Parliament last Friday.  The homosexual law allows Gomorrhists to adopt.  The Church supports the proposed referendum.  The Slovenian people foresee bringing the law to account by March.

Similar measures are being undertaken in Russia, in St. Petersburg, which promise to punish those promoting homosexuality with a fine of $16,700.  The measure is intended to protect the virtue of Russian youth.

New Pravda seems unhappy about the measures as it points out that homosexuality was only legalized under Boris Yeltsin, when it was specifically prescribed under Soviet Law.  They point out that, "anti-gay sentiment is still widespread."

Posted by Tancred at 3:23 PM No comments:

Email ThisBlogThis!Share to TwitterShare to FacebookShare to Pinterest
Labels: Defense of Marriage, Slovenia 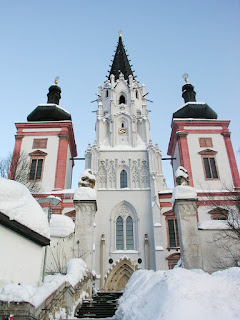 [Vienna] The theme of abuse will be at the center of the discussions of the Austrian Bishops' Conference which will meet at Mariazell Abbey for their summer meeting. On the table there's a comprehensive introductory document which will be discussed, which is the work of around 300 experts [Yikes] which project group is overseen by the Viennese Generalvikar Mosgr Franz Schuster, according to the media representative of the Episcopal Conference, Paul Wuthe. In its highlights the paper establishes clear guildlines for all ecclesiastical workers including orders for the prevention of sexual abuse and violence. "The goal is an Austria-wide standardization of procedures and with that, clarity", said Wuthe.

The proposals will include the establishment of a Church Ombundman and a reinforced collaboration of all ecclesiastical and state organizations with sexual abuse and violence.

It is also the first time that the Bishops' Conference of Slovenia will meet with that of Austria. Cardinal Schoenborn and Archbishop Anton Stres (Laibach) are meeting on the 23rd of June at 1:00pm in the Abbot's Council at the Abbey of Mariazell, in order to hold a press conference. Shortly before there will be a photo oprrotunity for all participating Bishops in front of the Basilica.

Archbishop Anton Stres of Laibach, Slovenia, will preside over the Mass and preach the sermon.