Recently there were protests in January protests against Filaret, because he had given an ecclesiastical distinction to anf the alleged Serbian war criminal, Vojislav Seselj. Three human rights groups, including the Serbian Helsinki Committee, called on the Serbian Orthodox Patriarch Irinej I, to distance themselves from the bishop. A person like Seselj, who was responsible for genocide, should not be worshiped as a model. There has been a process against Seselj before the International Criminal Court in The Hague for years.

Filaret, who has been bishop for more than 15 years, posed during the 1991 Balkan War for photographers with a machine gun in front of a tank. He has repeatedly emphasized his sympathy and solidarity with Serbian defendants in The Hague. Last summer, Filaret said he no longer belongs to the church. IRINEJ I admonished him and then asked him successfully to withdraw his statement. In addition, the bishop has been accused of sexual abuse of children.

His followers praise him, however,  among other things, that his episcopal palace, which originates from the 13th century monastery Mileseva, is a stately residence and has also established a radio station.

The morally and financially bankrupt EU is not the measure of all things.  Proof of that is that the left homo-mafia is not finished, corrupting all states.


(kreuz.net) Serbia has forbidden a planned march of left-extremist homosexual-onanists in Belgrade planned for this Sunday.

Civilian groups had made their decisiveness known, not to allow this anti-family and child provocation from taking place.

Against the Homosexual Thralldom of the EU


The Socialist Interior Minister, Comrade Ivica Dacic (45), have announced today in Belgrade that the police will forbid the planned homosexual provocation, if they don't cancel it for themselves.

"The Police are unable to support the development of such gatherings for reasons of safety, because they lead to conflicts, victims and bloodshed and lead to great chaos" -- maintains Comrade Dacic to Serbian media regarding the prohibition.

Under pressure from morally decadent and financially bankrupt EU, Belgrade allowed a left-extremist homosexual-onanist march of shame for the first time there.

Actually the citizens rose up and afforded decisive resistance to the chaotic goings on.

The Contamination of The Human Esteem

Today, this planned horror was also sharply condemned by Patriarch Irinej (80)-- the Head of the Serbian Orthodox.

It constitutes a "parade of shame, which will contaminate human esteem" -- he analyzed.

© boellstiftung, Flickr, CC
Posted by Tancred at 5:31 PM No comments:

Serbian Patriarch wants to meet to discuss end of Schism

In a development that may justly be called astounding, Patriarch Irinej Gavrilovic, the newly chosen head of the Serbian Orthodox Church, held a press conference on Jan. 28 to suggest that it was time the Pope and Orthodox leaders met to discuss ways of healing the longstanding schism with Rome.

He proposes that there be a grand summit in the year 2013 in the city of Nis, the birthplace of the Emperor Constantine, who issued the Edict of Milan in 313. The summit would also be a celebration of the 1700th anniversary of the edict that freed Christians from persecution for the practice of their religion in the Roman Empire. The patriarch envisions this meeting as a step toward full communion with the Holy See.

“This new path should be Christian and sincere with the desire of establishing one Church of Christ," he said.

The Vatican has responded favorably to the proposal. A pope has never visited Serbia, known as one of the Orthodox communions that has historically been most hostile to the Catholic Church.

http://www.fatima.org/news/newsviews/efnews020510.asp
Posted by Tancred at 1:37 PM No comments: 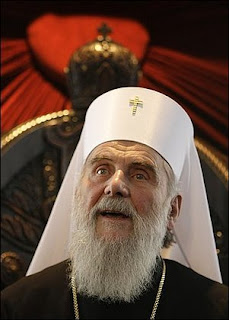 The Associated Press
Thursday, January 28, 2010; 8:39 AM
The new head of the Serbian Orthodox Church on Thursday urged dialogue to overcome long-standing divisions with Roman Catholics.

Patriarch Irinej said that a 2013 anniversary important to Christians would be a “good opportunity … to meet and talk.”

He added that “with God’s help this (dialogue) would continue to overcome what had happened in history and take a new, Christian road.”

h/t youngfogey at conservative blog for peace, here....
Posted by Tancred at 6:21 AM No comments:

The bishop of Niš, Irinej Gavrilovic, 80, was elected on January 22 to succeed Patriarch Pavle as the head of the Serbian Orthodox Church, Belgrade-based radio station B92 said.

Gavrilovic, metropolitan Amfilohije and bishop Irinej of Bačka won most votes from the 37 bishops that make up the electoral synod of the Serbian Orthodox Church.

Gavrilovic's name was drawn randomly in what is known as the apostolic vote, B92 said. "Such election procedure was introduced simply to protect the Church against external political influences of the state," B92 quoted local journalist and Church expert Milenko Pešić as saying.

If U.S. voters elected their president in the same way the Serbian Orthodox Church chooses it patriarch, they could have seen Ralph Nader, Ross Perot or other third place finishers taking up residence in the White House. That’s because the Church, in a move originally aimed at thwarting Communist authorities, uses a system that incorporates a lottery within the election by church elders to choose a leader.

The Holy Synod of Bishops, the Church’s top executive body, will use that system within the next three months to elect a successor to Patriarch Pavle, who died on Sunday. Pavle headed the Serbian Orthodox Church during the breakup of Yugoslavia in the 1990s as Serbs warred with neighbours of other faiths.

Pavle, 95, died at Belgrade’s Military Hospital where he had been treated since 2007 for various ailments. As his health deteriorated, although nominally still head of the church until death, Pavle had given up its day-to-day running in 2008 to Bishop Amfilohije, who is seen as a Serb nationalist on issues such as Kosovo.

Read further...
Posted by Tancred at 1:22 PM No comments:

The head of the Serbian Orthodox Church, Patriarch Pavle, has died in Belgrade, the Church has announced. 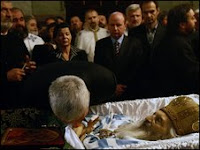 The patriarch, 95, became leader of the Church in 1990. He was admitted to the city's military hospital two years ago.

Though he reportedly suffered from heart and lung conditions, the Church did not specify the cause of death.

Most of Serbia's population of seven million people are Orthodox Christians. President Boris Tadic said this was "an irredeemable death" for the nation.

"There are people who bond entire nations and Pavle was such a person," Mr Tadic said in a statement.

"His death is also my personal loss," the president said.

Bishop Amfilohije, who has served as acting head of the church during most of Pavle's illness, broke into tears as he held a prayer after announcing the death.

Another bishop, Lavrentije, said the patriarch's death was no reason to be sad.

"The Serbian people now have someone to represent them before God better than anyone else," Lavrentije said.

The Church's highest body, the Holy Synod, may announce as early as Monday when a new patriarch will be chosen - usually after at least 40 days.

Pavle was a respected theologian and linguist, known for personal humility and modesty.

After the fall of communism and rise of Serb nationalism, the Church regained a leading role during his rule.

At the beginning of the Balkan wars that followed the dissolution of Yugoslavia in the early 1990s, Pavle said - according to Serbian state television: "It is our oath not to make a single child cry or sadden a single old woman because they are of another religion or nation."

But critics accused him of failing to contain hardline bishops and priests who supported Serb paramilitaries against Catholic Croats and Bosnian Muslims.

Since then, the Serbian Orthodox Church has strongly supported the Serbian government in its efforts to stop Kosovo's independence drive.

"Kosovo is not only a question of territory, it is a question of our spiritual being," he said after Kosovo's declaration of independence.

Link to article...
Posted by Tancred at 8:02 PM No comments: