Berlin (Kathnews). As the Society of St. Pius X. reports on its website, Bishop Bernard Fellay (SSPX) will consecate the Church of St. Peter on the 25th May 2013 in Berlin. It's located in the urban district of Berlin-Wilmersdorf.  The church was built in 2002-2005.  In the simple appearance of Saint Peter, it draws on the eclectic-historicist design. In its interior, the four-bay barrel-vaulted nave surprises with its magnificent Renaissance style, embodied in forms of wall and ceiling painting by the church painter Ralf Lürig. A special feature is the 1900's pipe organ by the English organ builder Albert Keates (1862-1950) with 16 sounding registers a complement of two manuals (keyboards), according to  pius.info. 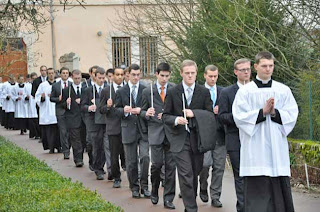 In addition to Bishop Fellay's recent talk at a priestly ordination (at DICI) on the 27th of January, there's more cause for hope.  This report just in from Society website in Germany:

They have received the spiritual robes of clerics. 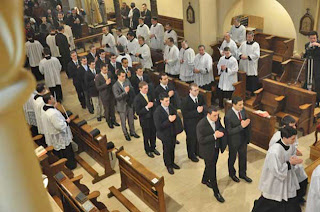 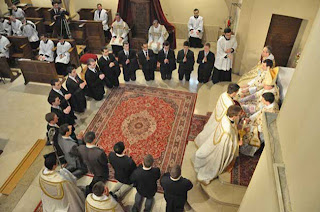 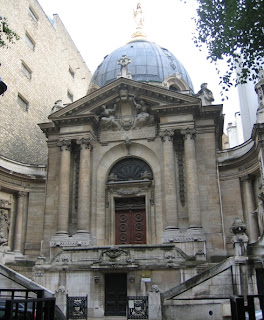 [Piusbruder.de] The Society is going to attend another church in Paris.

It is relates to the church "Our Beloved Lady of Comfort" in the 8th District.

The building came into existence shortly before the turn of the century as a memorial church, which was built in memory of the the fire of 1897.  In this place the Duchess of Alencon, the sister of Elisabeth of Austria, lost her life.

The historically protected church has a large crypt, so that it can also hold large numbers of the faithful.

The 8th District of Paris is northwest of the Cathedral of Notre Dam on the right bank of the Seine, and is the political and economic center of Paris.  Here stands also the Élysée Palace.

Email ThisBlogThis!Share to TwitterShare to FacebookShare to Pinterest
Labels: Our Lady of Comfort, Paris, SSPX Growth

He excommunicates his own people:  "Whoever rejects completely or partly doctrinal statements, can not be in full communion with the Church".

(kreuz.net)  The Society of St. Pius X is schismatic.

This nonsense is maintained by the Neoconservative laissez-faire Cardinal Joachim Meisner of Cologne on his website 'direktzu.kardinal-meisner.de'.

The Neoconservative Prince of the Church, who allows Old Liberals to do as they please, has shown himself  to be a bitter enemy of the Society.

In his Diocese the Cardinal lets the Devil dance.

So does the aid agency 'Caritas' which is under his supervision, link to the Nazi founded anti-Church child murdering chain 'pro familia', despite numerous protests.

'Caritas Cologne' propagates its gender madness and would like that children live in abnormal sexual role models.

The Catholic pregnancy counselor of the Archdiocese of Cologne  sends pregnant mothers to advice counseling, which issues death certificates for child slaughter.

From Cardinal Meisner's own people, there is no demand of the acceptance of the statement of the Second Vatican Council that abortion is a "horrible crime".

Stupid statements and completely out of the question

The text of the Cardinal consists of bowing and scraping to the Pope and various problems against the Society of St. Pius X.

Benedict XVI. has experienced a setback, he winced:  "Only think of the stupid and completely unacceptable statements of Bishop Williamson."

It is related to a legitimate historical request, which hasn't received till today an answer.

Yet he still has no problems collaborating with an Old Nazi organization like 'pro familia'.

Did Christ not Die For the Jews?

The Holy Father has "always made it clear" that the Society must unmistakably accept the Magisterium -- writes Cardinal Meisner of the Pope.

The recognition of the Magisterium contains acceptance of all of the Councils.

To that belongs -- the magisterially sparsely binding -- Decree 'Nostra Aetate' on the relationship of churches to non-Christian religions.

This is distorted today by the supporters of Cardinal Meisner in a distorted anti-Semitic meaning related to the Jews , that Christ did not die for the Jews.

Cardinal Meisner complains that the Society should withdraw its "criticism of the Holy Father.

They have -- supposedly -- said, that the Pope is "not right believing".

It is completely unclear what the Cardinal is accusing the Society of doing.

Dusted off the schism club tucked away before the Council

The Prince of the Church even had the insolence to project things which are really applicable only to the Conciliar Church of German, onto the true believing Society.

"Whoever rejects partially or completely the doctrinal expressions of the Council,  can not have complete communion with the Church."

Cardinal Meisner's unjust condemnation against the Society is in reality a break with the Conciliar Church.

Conciliar Church without a Future

They remain "thus they are suspended and continue as a schismatic group along with their bishops" - rants the Cardinal, but has nothing to say about the gay-friendly Cardinal Rainer Maria Woelki of Berlin.

The state of the Brotherhood will only change when they fully recognize the "Second Vatican Council" fully, including its decrees on religious freedom, the relationship with the Jews and the currently valid form of the Liturgy of the Catholic Church."

The problem is that before that happens, the dogmatically unbinding Pastoral Council, together with the Conciliar Church, will be long since piled up on the trash heap of history.

Link to original kreuz.net...
Posted by Tancred at 1:26 PM 3 comments: 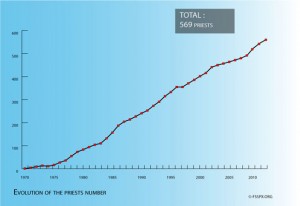 Posted by Tancred at 7:30 PM No comments: 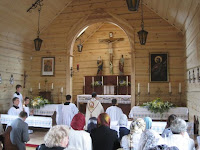 Lithuania. The Society of Saint Pius X has built a church in Kaunas. This is according to a report from the German website 'piusbruderschaft.de' with pictures. In Pius-Father Josef Persie of German descent is working in Lithuania, among others.

SSPX has 57 New Candidates for Priesthood.
Posted by Tancred at 10:31 PM No comments:

With nine entrants in the Seminaries in Argentina and Australia in the Spring there are 57 new candidates for the Society of St. Pius X.

Here's a related article on growth in the FSSP.
Posted by Tancred at 12:16 AM 2 comments: