SSPX May be Recognized on Monday by Pope Francis


(Rome) On Monday the 21st of November, Pope Francis Francis will publish the Apostolic Exhortation Misericordia et Misera at the end of the extraordinary Holy Year of Mercy. This was announced by the Vatican Press Office in yesterday's bulletin. Internet blogs, which are close to the Priestly Society  of St. Pius X, report that Pope Francis will come out with a bang on Monday.

According to the announcement, the pope would announce the reunion of the full unity of the priestly society established by Archbishop Marcel Lefebvre, with the Holy See. At the same time, he would be able to build canonically the Pius Brotherhood as a personal prelate. Is it only speculation? Since last April the signs of such recognition have been condensed.

The Society, founded in 1970, was denied canonical recognition in 1975. Since then, their status has not been clarified. Officially, it does not exist as a separate legal entity for the Holy See. An open break took place in 1988. Rome declared the founder, Archbishop Lefebvre, and the four consecrated bishops as excommunicated, for their valid if  unauthorized episcopal ordinations. The validity of the celebration of the sacraments by priests of the Society, without the permission of the Church, was repeatedly questioned. According to Benedict XVI, the excommunication was annuled. At the same time, doctrinal conversations were held between the Holy See and the Pius Brotherhood. In 2012 the recognition of the Society by Rome seemed to be near, but at the last moment  was stymied because internal Church resistance. Since then it has been assumed that the failure of recognition is a reason that Benedict XVI. had resigned.

Under Pope Francis came an unexpected resumption of contacts. In September 2015, Francis proclaimed, with the proclamation of the Holy Year of Mercy, that during the jubilee the sacrament of penance by priests of the Society was "valid and permissible". The Society then expressed its thanks for the "paternal gesture".

According to sources close to the Society, the canonical establishment was intended as a personal prelature. Thus the Society  after the Opus Dei would  be the second ecclesial community to have this new legal status. It envisages that a priest with the rank of a bishop stands at the head, and the members of this family are largely excluded from the jurisdiction of the diocesan bishops. 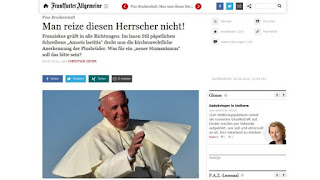 (Rome) The Frankfurter Allgemeine Zeitung (FAZ) today published a broadside against a possible recognition of the Fraternity of Saint Pius X founded by Archbishop Marcel Lefebvre.
" You do not provoke these rulers! " Is the title of the article by Christian Geyer-Hindemith. A recognition of the SSPX by Rome suggests a threat to the features editor.
"What a 'new humanism' would that be?" Asks Geyer in an idiosyncratic allusion to the acceptance speech of the Pope last Friday, as he was awarded the Charlemagne Prize in Rome.
The FAZ article first confirms that a canonical recognition of the SSPX by Pope Francis may be imminent, and with very favorable conditions for the Fraternity. It was founded in 1970 by Archbishop Lefebvre in response to the Second Vatican Council and its consequences with the aim to preserve the Catholic heritage undiminished in doctrine and discipline.
Against such recognition there is resistance stirring, and it comes mainly from Germany. The intention of the FAZ article is to generate pressure against such recognition. Thus the usual "fight against right-extremism" mechanisms and taglines are employed.
It is therefore likely to be expected in the coming days with further tendentious articles in the German "mainstream media" who want to prevent a canonical agreement between Rome and the SSPX. [Let's not forget Vatican Insider.]
Text: Giuseppe Nardi
image: FAZ (Screenshot)
Trans: Tancred vekron99@hotmail.com
Link to Katholisches...
AMDG
Posted by Tancred at 10:02 AM 5 comments:

Msgr. Athanasius Schneider: "Society of St. Pius Should be Recognized, Just as They Are" 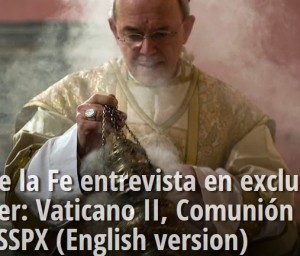 (Rome) Msgr. Athanasius Schneider, Bishop of Astana, has suggested in an interview with the Catholic Spanish site Adelante la Fe, that the Holy See is close to recognizing  the Society of St. Pius X.. Bishop Schneider said: There is "no reason to deny the priests and faithful of the Priestly Fraternity of an official canonical recognition".
The auxiliary bishop visited  the seminaries of the SSPX in the United States and France in the Spring. Adelante la Fe asked him whether there are "prospects for a speedy reconciliation" and what is the main obstacle to such.
Schneider said: "The Holy See asked me to visit the two seminaries of the SSPX to perform with a group of theologians of the Society and His Excellency, Bishop Fellay, a debate on a particular theological problem. This showed me that the SSPX is not an insignificant ecclesial reality for the Holy See, but should be taken seriously. I have gotten a very good impression during my visits. I was able to observe in two seminaries a healthy theological, spiritual and human reality. The spirit of the sentire cum ecclesia of the SSPX was obvious as they welcomed me as envoy of the Holy See with real respect and great warmth. In both seminaries, I was glad to see the images of Francis, the currently reigning Pope, at the entrance."
Next the Bishop said: "The singing of the traditional prayer for the Pope ("Oremus pro pontifice nostro Francisco ...) during the solemn exposition of the Blessed Sacrament was moving. To my knowledge, there are no grounds to refuse the priests and faithful of the SSPX official canonical recognition, therefore, they should be accepted as they are."

"Vatican II on both sides overvalued and overstimated"

In his reply, Mgr Schneider also addressed the Second Vatican Council: "I think that the question of Vatican II is to be considered not as aconditio sine qua non, as it was an assembly whose purpose and character primarily was pastoral. Parts of the Council statements reflect the circumstances of the time and therefore have only temporary validity, [emphasis ours] as is customary for just disciplinary and pastoral documents. If we look at the matter from the perspective of two thousand years of church history, we can see that an overvaluation and overestimate a pastoral reality of the Church is present as the Second Vatican Council by  both sides (of the Holy See and the SSPX).
The SSPX believes it celebrates a living and moral life as demanded by the highest moral life and Magisterium  as the Church has done for centuries around the world, and they recognize the legitimacy of the Pope and the diocesan bishops praying publicly for them, they recognize the validity of the sacraments according to the typical edition of the new liturgical books, that should be enough for a canonical recognition of the SSPX by the Holy See. Otherwise, the oft-repeated pastoral and ecumenical openness of the present Church would lose its objective credibility, and raise the story someday  of accusations against the Church authorities of today, because they have imposed on  brothers a greater   load than necessary (Acts 15:28), which is the opposite of what is the pastoral method of the Apostles.
Text: Giuseppe Nardi
Image: Adelante la Fe
Trans: Tancred vekron99@hotmail.com
Link to Katholisches....
AMDG
Posted by Tancred at 4:06 PM 6 comments: