Pope Cancels Meeting With Leftist German Politician Because of Fever

As Vatican spokesman Federico Lombardi explained, there is a slight fever, which must be cured. The audience with leftist Thuringian, Minister President Bodo Ramelow, will be cancelled. UPDATE: the meeting will be rescheduled to Friday

Vatican City (kath.net/KNA) Pope Francis has canceled his audiences on Thursday because of a fever. Vatican spokesman Federico Lombardi told journalists, there is a slight fever, which must be cured. Francis did celebrate morning Mass and gave the sermon. "At the moment he is resting. As usual, he will recover fairly quickly," said the Vatican spokesman.

On Thursday morning, Francis originally wanted to also receive the Prime Minister of Thuringia, Bodo Ramelow in audience. UPDATE: The meeting of Pope Francis with Prime Minister Ramelow has now been scheduled for Friday. (C) 2016 CBA
Catholic News Agency.
Trans: Tancred vekron99@hotmail.com
AMDG
Posted by Tancred at 6:23 AM No comments: 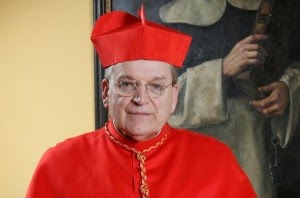 (Rome) Cardinal Raymond Leo Burke, Cardinal Patron of the Sovereign Order of Malta , was received on Thursday by Pope Francis in audience.
The American cardinal, born in 1948, was ordained a priest by Pope Paul VI after completing his theological studies at the Gregorian University in Rome in 1975 by Pope Paul VI. In the United States he was active in counseling  and education, then completed a doctorate in canon law at the Gregorian University and returned in 1984 to the United States where he worked in pastoral care and as Vice-Chancellor of his home diocese in Wisconsin. Because of his reputation as an excellent canonist Pope John Paul II. brought him to Rome as   defender of the bond of marriage in  the Supreme Court of the Apostolic Signatura in Rome.
In 1994 he was appointed bishop of his home diocese of La Crosse, 2003, then an appointment as Archbishop of St. Louis and in 2008 by Pope Benedict XVI. appointed him Prefect of the Supreme Tribunal of the Apostolic Signatura in Rome and thus to the Dicastry Head of the Roman Curia.
On November 10, 2014, the Holy See Press Office announced in its day Bulletin  that Cardinal Burke was replaced as Prefect of the Apostolic Signatura on November 8 and made Cardinal patron of the Sovereign Military Order of Malta.
The relatively young cardinal was thus removed as Dicastry Head, away from the Roman Curia and deported to a post of honor without a role in church leadership. This unusual degradation was already effective in September.  Cardinal Burke himself made public the instructions.

Punishment and Removal from Church Leadership and Synod of Bishops

The American cardinal had, like no other Cardinal of the Catholic Church,  expressed criticism in the past few months   for the administration,  gestures, decisions and statements of Pope Francis. As the Head of a Dicastry, Cardinal Burke  was in office because of the Synod of Bishops on the family. There, the conflict came to a head when he openly spoke of "manipulation " and "betrayal"  and accused Pope Francis in the way he handled  controversial topics in the Synod of Bishops, "to have caused a lot of damage."  In October 2015, there will be a second decisive part of the Synod of Bishops. Due to his distance from the Roman Curia, Cardinal Burke can not participate officially. Only the Pope himself could appoint him as a member of the synod, which is yet considered very unlikely.
All observers, no matter what direction, saw the dismissal of a punishment of the Cardinal. Already in the fall of 2013, Pope Francis had severely curtailed the influence of the American Cardinal of his Church leadership by removing him from two congregations. Above all, Burke's influence on the appointment of bishops in the United States, which he had under Pope Benedict XVI, had been completely eliminated. Among the Cardinals, who opposed the defense of the marriage sacrament of the Kasper Group, Cardinal Burke was the real engine. Due to his removal from the Curia, orthodoxy would lose its dynamic head.
Just two months after the demotion, Pope Francis is to receive his critic. Prior to the drastic personnel decision, there was no discussion between the Pope and the Cardinal.  Cardinal Francis had only  granted one audience, which took place on 11 June-2013. The content of the yesterday's meeting is unknown.
Text: Giuseppe Nardi
image: MiL
Trans: Tancred vekron99@hotmail.com
Link to Katholisches...
AMDG
Posted by Tancred at 7:35 PM 84 comments: