Cardinal Schönborn is the Left’s Candidate for Pope

Notes on Vienna’s Archibshop -- It’s Probably Fair to Say, He’s the Candidate of the Left

“Tell me, who praises you, and I will tell you, who you are.”  On this old saying one may think, if  the completely astonishing media praise is taken for the truth,  which at present and in view of the coming conclave is dedicated to the present Viennese Archbishop.  This can be presently gleaned:

“The tension is a concern.  Especially as Austria’s Cardinal is appearing on all short lists of the international book maker as a candidate.  … Schönborn is considered in the world Church as a proven crisis manager, as partly eager for reform and enjoyed international visibility as the editing director of the world catechism. … The more the point is, says Kirchen-Insider, in the Curia and in the Vatican to be in withdrawal, then the more it needs a still relatively young and strong Pope. Schönboren is at 67 in the best age for a Pope. Notably: Currently Italian media praise Schönborn… and among Europe’s Cardinals Schönborn is a strong name, a well balanced reformer and one, who is open to the progressive wing of the Church.”

These lauds appeared in the local left-gazette “News”, supposedly “Austrias largest news magazine”; the praise is part of an eleven page snide, insulting and anti-Church description of the abdication of Pope Benedict XVI. The praise of Schönborn is also sung with ulterior motives. For example in the also left-leaning “Süddeutschen Zeitung” (16./17.2.2013) 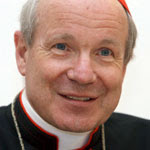 “… apart from that Vienna’s Archbishop Christoph Schönborn brings … much along, that might qualify him -- at 68 years of age also an adequate age and very much experience; and he’s been leading the Archdiocese of Vienna for 13 years. … He is considered one, who can clearly participate and as a guarantor, that the theme of the struggle with sexual abuse will occupy a high place. … It is also mentioned with praise in Rome, that this Cardinal, clothed like a simple priest, arrived by train at the station terminal and took his own luggage himself to the taxi.”

Or the Left boulevard sheet,“Österreich” which offers the erroneous tag line (2/13.2013): “Schönborn is the First Choice”. “Is being considered as the successor… I trust him for that, Schönborn is a very intelligent person. He has also, as he handled himself in the subject of Groer, made a name for himself. I well believe that he has a chance.”

The Left-leaning “Kurier” (2.13.2013) heading: “Schönborn is in Pole Position for New Pope” and likewise the left Italian “La Republica”, in which it says: “Among he foreign candidates Cardinal Christoph Schönborn is the first choice.” As an example of a long harmonious chorus from the Left media world, besides the praises after praise, it is seemingly clear that Schönborn is THE candidate of the Left.

What Could the Reason be?

Even in Austria, there where the view on the activities of the Archbishop of Vienna can’t be obscured by fine words and words effecting orthodoxy to Rome, Cardinal Schönborn has numerous critics among the Pope-loyal, elite of local Catholicism.

An extensive education and high intellect isn’t begrudged is allowed him even by his opponents, yet admitting all of that he doesn’t have the quality of character for his high position, or for the Papal Office.

The enthusiasm of the Left media over Schönborn is no mistake. One had already from the beginning of his time in office seen that while he quickly distanced himself publicly from his relatively conservative (and therefore unloved by the establishment) predecessor with an excessive campaign of character assassination, thereby winning the impression that under Schönborn’s direction, the Church in Austria had become thoroughly instrumentalized -- by the ruling Left and in the service of its interests.

As to the grounds for the Schönbornistic easy past in the here and now, much has been guessed. Some have come to the conclusion that he simply lacks the courage. As he was joined with the Cardinal’s purple, there appears to be no question that he has been very preoccupied.

A great Schönbornistic easy pass (to the establishment) is seen for example, according to local critics, was in the election for the Bundespresident of the Republic in 2010, as the Archbishop made gestures and endorsements, which many interpreted as electioneering for the candidate of the Left.

Or it is seen also in his acceptance expressed to the ruling majority on questions of abortion, where Cardinal Schönborn is not to be seen, for example, in any protests at abortion clinics, he also banned on several times all too vocally and all too effectively resistance (like toward his colleague Bishop Laun) against the abortion business, while he was clearly effective in the media while appearing for a Left-anarchist organized “Asylum” - legitimizing by his visit, the occupation of the Votivkirche in Vienna.

Whether it applies to the “artwork” of a Bolshevik “artist” suddenly put in the church space for exhibition; whether it is for the state recognition of homosexual concubinage, which in no way has ben opposed by him, whether it’s about the public and seemingly excessive payments of ecclesiastical money to the so-called “victims” of ecclesiastical “abuse” or for high ecclesiastical endorsements for Leftist and Liberal politicians, while at the same time Conservatice clerics must fear Archepiscopal criticism or discipline -- Schönborn’s effect on increasingly wider circles is dubious.

Also the countless and truly ostentatiously schonbornistic gestures of piety (Carrying luggage from the train station) may not convince, gives one up and down the impression that they could belong to the subtle medium of an apparently very efficient career plan.

If the Church is proven to be done a good service by a Schönborn Papacy, one may in any case well doubt. From the media’s praise, which takes Schönborn’s side, there are indeed certain circles having a great interest.

We would like would like to give a selection here of critical voices together, which have accompanied Schönborn’s effect in Vienna in the last 13 years. A picture can be formed for one’s self. We will see that this collection will be continually increased.

Italian Media in Frenzy About "Plot Against Pope"

Edit: Rorate Caeli has reported a feeding frenzy in the Italian press over speculation that there is a plot against the Holy Father.  (from Corriere della Sera):

Milan - "Vatican, plots and intrigues. A plot against the Pope, he will die in the next 12 months" This is the title in the first page of Il Fatto Quotidiano in its February 10 edition. Written in German - The news would have been given in a letter handed by Cardinal Castrillon to Benedict XVI. Included in the note, a report of a conversation [in a trip to China in November 2011] of the Archbishop of Palermo, [Cardinal] Romeo, in which he affirms that the Holy Father is in great risk and that an attack is feared within 12 months. The document is dated from December 30 2011, but it was given to the pope in January 2012. ... Romeo would have also spoken of the probable successor and indicated [Cardinal] Scola, Archbishop of Milan. The author of the article is journalist Marco Lillo. The director of Il Fatto Quotidiano, Antonio Padellaro, has said that the document will be published in its entirety in the paper. ... Soon afterwards, the reply of the Vatican arrived through Father Federico Lombardi, spokesman of the Holy See: "These are clearly ravings, which are not at all taken seriously. This is madness."


http://rorate-caeli.blogspot.com/2012/02/for-record-italian-media-in-frenzy.html
Posted by Tancred at 8:00 PM No comments: