Prelate Ludwig Limbrunner refused to allow the pilgrims to Altötting to use their Grace Chapel for adoration. Only silent prayer is allowed. As some suggested according to the kreuz.net article, it's a shame that other Faiths are allowed to use the chapel, but not Catholics. 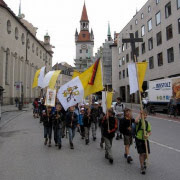 [Kreuz.net]The Society of Pius X is to blame: had they been a homosexual friendly group of protestants, they would have been invited into the chapel to the fanfare of trumpets.