Ohio representative Nino Vitale demonstrates how masks are unsafe.  How will his overlords silence him now? So far, they've tried to say he's an anti-semite and a racist. 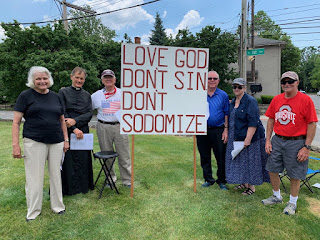 Edit: he who plants seeds of hatred against the Catholic Church, as the Leftist press has, reaps desecrated and damaged churches.

"When we found her, she was lying face-first in the grass and dirt," said Sacred Heart's pastor, the Rev. Dave Ireland. "I don't know how you could get the strength to push it over."
The nose and parts of the veil got chipped in the fall, said Ireland.
Link to Northeast Ohio...
Posted by Tancred at 9:42 PM No comments: