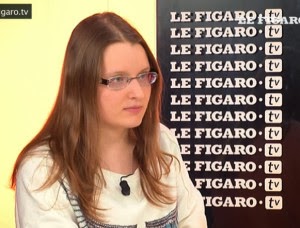 (Paris) In France, people are talking  of Anna Gate: the case of a young woman who spied on the civil rights movement Manif pour tous for the government. "You know, we love  KGB methods."
François-Xavier Bellamy, Vice Mayor of Versailles explains how he has helped the young woman and is pursuing legal action against the state: "In Hollande's France,  it is not enough just to agree with the President in order to be treated like a criminal ".
"I'll never forget Anna's face," said the letter from the only 28 year old, non-partisan, Catholic, Vice Mayor of Versailles, François-Xavier Bellamy, as he begins in an interview with the French daily newspaper Le Figaro .
Anna, the given name of Annagate, is a 19 year old Russian woman. The French police are  doing this, what is called an indecent offer: one can be expelled unless they spy on the civil rights movement Manif pour tous from, but might obtain French citizenship in return.

"We Love the Methods of the KGB"

"When Anna  knocked at my door, she was deeply frightened, because of the threat of deportation and the threat by the police," said Bellamy. "You know, we love the methods of the KGB," said the civil servant. "One can easily imagine how such words must make an impression  on a young girl," said the deputy mayor. "Despite the threat against talking to anyone about the police pact, she had the courage to speak," said Bellamy.

"I am Ashamed of France"

The Versailles Deputy Mayor, said Le Figaro , as he listened to the girl. "In the end I apologized to her for my country. I was ashamed for France, because of such methods, one of which I had never thought of having to encounter in a free society," said Bellamy. He took Anna in and offered her help: "Today she is out of danger. But where  would  she be today if we had not found the courage to trust each other? ". 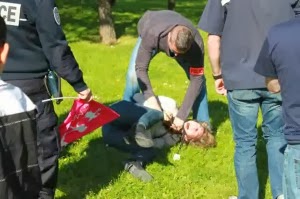 The publicized case of Bellamy shocked even more the confidence of the French in their current .governing Interior Minister, Manuel Valls .  Meanwhile there is an investigation underway which is to examine the allegations.
Vice Mayor Bellamy described "three reasons why this matter is of particular severity."
"Primarily it is because it proves that the current government has misused the police to identify and spy on citizens just because they are  engaged in lawful and democratic rallies to manifest a different opinion than that of the government." And again further: "The Interior Minister is not  using the police to not guarantee the safety of the French, but to spy on innocent citizens whose only crime is to be opposed to a proposed law  [the "gay marriage"]. I do not mean the individual police officers who carry out excellent work. The culprits are the high officials who force their subordinates to employ methods to  use terrorism against the democratic domestic opposition. " 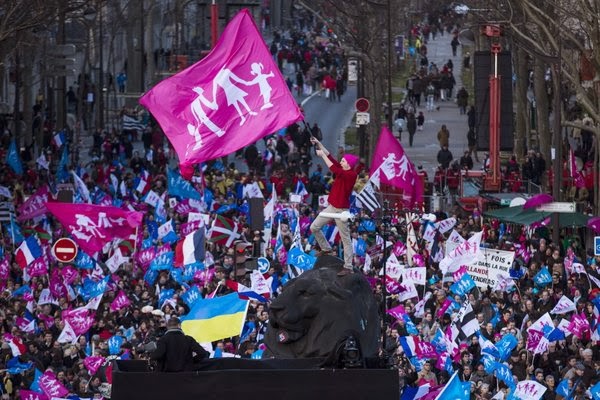 "The methods are the second reason for the scandal. Is it normal to terrorize a student in such a way? To isolate them to hold without a lawyer and without due process, to separate them from their parents in order to put pressure on them with the brutality of an arbitrary state? Is Mr. Valls ready to get the names of some young people who dare to have a different opinion other than him, ready to destroy the lives of Anna?" said Bellamy.
And third: "The Home Secretary will have some explaining to do. It is not enough to add still another injustice  injustice by letting fall the blame on any police officials, officials who have following a command that could only come from the political side. The story of Anna poses a fundamental problem for our democracy: In Hollande's France  it is enough to have disagreed with the President in order to be treated like a criminal," said the Vice Mayor of Versailles.

Bellamy   promised Anna not to make the matter public, unless she herself  would be willing to talk about it. "I am grateful to Anna that she has found the courage to speak about it a few months later. I thank her on behalf of France. I thank her on behalf of our community, which must not be robbed of the legacy of their parents, stealing the sacrifice of their blood: the guarantee of a democratic debate, the right to fair trials and freedom of conscience," said François-Xavier Bellamy, young non-party, vice mayor of Versailles.  The 28-year-old Bellamy has a leading function in the traditional Catholic Boy Scouts of France, with the German-speaking world, the  is connected with the Katholische Pfadfinderschaft Europas (KPE).
Text: Giuseppe Nardi
image: Tempi
Trans: Tancred vekron99@hotmail.com
Link to Katholisches....
AMGD
Posted by Tancred at 6:02 AM 2 comments: