Troika Over the Franciscans of the Immaculate -- Who is Mario Castellano, Really?

(Rome) A year ago, on 29 July 2013, the provisional government of the Franciscans of the Immaculate (FI) was announced.  Nine days before, Katholisches.info had just reported on the opening of a new monastery that the Order was still in flower. The decree of the Congregation of Religious was signed with the approval of Pope Francis on July 11th.  Since August 11, the Order has been prohibited the celebration in the traditional form of the Roman rite. Its fate now lies in the hands of a triumvirate: which was set up by the Congregation of Religious' Apostolic Commissioner Father Fidenzio Volpi, OFM Cap, the Franciscan "parricide" Father Alfonso Bruno (FI) and a hitherto barely visible, but the more active eccentric figure, who was active as a consultant with the criminal action against the Order: "Professor" Mario Castellano. Who is Mario Castellano? This question was asked by Emmanuele Barbieri for Corrispondenza Romana. What he was doing is astonishing as  summarized here.
Mario Castellano came into the world in 1949 in Imperia on the Italian Riviera, the son of a well-off Catholic family. Father Adolfo had come into prosperity as a representative of the rice brand Scotti. During the German occupation of Italy, he joined the  "whites", i.e. Catholic partisans, and after the war on the council of the Christian Democratic party in his hometown. Uncle Ismaele Mario Castellano was Archbishop of Siena.The young Castellano studied law and was admitted as a lawyer, a profession he never exercised, however. His political sympathies were always to the left. To be precise, he belonged to the left wing of the Christian Democrats (DC).In Imperia where he was known as a Cathokommunist. It is said that he belonged to the Grand Orient of Sanremo since the 90s. We wait for the person who denies this news.

Support For The "Nicaraguan Revolution"

Although he never completed his habilitation, he adorns himself with the title "Professor". Castellano taught law  immediately after the takeover by the Marxist Sandinistas at the University of Managua. For ideological reasons, Castellano had moved to support the "Nicaraguan Revolution" to Nicaragua, where he married a Nicaraguan woman, from whom he separated after a few years. After returning to Europe, he worked with various esoteric and pro-Islamic websites before it was the "right hand" or perhaps better to the "left head" of Father Alfonso Bruno. Castellano moved into the convent of the Franciscans of the Immaculate on the Via Boccea in Rome. Into the house that can be viewed as the center of dissidents who originated the order's internal subversion. From this house from the the Sacristan service also  supports   the Papal Basilica of Santa Maria Maggiore. It's the appropriate place to come into close contact with various points in the Vatican. From there, Castellano accompanied Father Bruno as the new Secretary General of the Order in its inspections of the monasteries and religious houses.

Sympathies for the Left, Esotericism and Muslims

Franciscan Friars of the Immaculate Conception as they were allowed to celebrate the Old Rite
Starting in 2005 Castellano wrote passionately for the rights of Muslims in Italy and the EU; for multiculturalism; for the adaptation of European laws on the rights of Muslims and even for believers and non-believers and believers of all religions.
2008 Castellano stood against the traditional rite and everything that might offend "Jewish sensibility". The author named the esoteric as one of three positive reasons why the Catholics are not "damned forever"  to fight against the Muslims and the Jews. On the website Islam Online he raved of mosques as a "factor of stability and security."
In 2011 he held, at a conference  organized by the Lions Club Sanremo  for the Italian Risorgimento,  a lecture on "The timeliness of Cavour," the notoriously anticlerical Italian statesman, who reeked of English Freemasonry.

From the French Revolution to the EU Superstate

In 2012 he was on the website run by Father Alfonso Bruno mediatrice.net  with the anonymous essay " Europe on the way to a federation?," but this actually was by Castellano.
The author gives himself to be an enthusiastic supporter of the French Revolution and of a centralized unitary state of Europe. The crisis that Europe is currently experiencing, he compares with the crisis in France shortly before the outbreak of the revolution. At that time the crisis was voiced in a revolutionary act by which the Estates-General proclaiming the Constituent Assembly and thus nudged the revolution. Today, the takeover of the sovereign debt of some EU Member States and the private debts of some banks by the EU constitutes a revolutionary act, which will make the  way free to a European federal state.

In the wake of the French Revolution, the clergy was divided on the issue of the schismatic Civil Constitution between  constitutionalist and priests true to Rome. Castellano's sympathies include the schismatic priests as he wrote in the  article "France and the Positive Secularity": "When Napoleon concluded the Concordat of 1801 with Pius VII, the clergy true to Rome was pardoned and allowed to exercise their office again, while the work of the clergy loyal to the constitution  had been recognized in the previous decade from the canonical view. It had therefore acted properly both from the point of view of the state as well as from the point of view of the Church in France, who had decided to remain faithful to the nation. "
Mario Castellano has made himself known, beside his sympathies for the left (first left, always to the left), mainly by his wild attacks against traditional Catholics, who are not willing to  make cheap and lucrative compromises with the spirit of the times and the respective power. Perhaps it is therefore such considerations by Commissioner Volpi and the Congregation of Religious that made him a consultant.
He is a remarkable figure who may have a say in the Order, which was obliged to  Catholic tradition and the Old Rite and dared to join the struggle against the influence of Freemasonry. The goat has been appointed to be gardener.
Text: Giuseppe Nardi
image: Corrispondenza Romana
Trans: Tancred vekron99@hotmail.com
Link to Katholisches...
AMGD 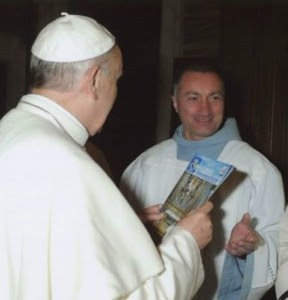 (Rome) The Apostolic Commissioner for the Franciscans of the Immaculate has appointed Father Alfonso Bruno as the new Secretary General of the Order. With this he has completed the first step toward rebuilding the traditional Order, as the historian Roberto de Mattei feared he would, as the decision of the Congregation of Religion became known to the faithful and growing Order placed under the coming under provisional administration.

Father Fidenzio Volpi, OFM Cap was the Commissioner appointed by the Holy See, with the sole power of decision, made Father Alfonso Bruno to his right hand and highest representative of the Order on the 5th of September. The new Secretary General immediately sent a statement to all the brothers of the Order, as he announced himself, that it is the responsibility of the Secretary, the Commissioner to help "the members of the Order and to the outside" help, "to handle all correspondence sent by the Apostolic Commissione, to publish all of the minutes of meetings set by the Apostolic Commissioner, to manage the General Archives of the Order and to update the statistics. The General Secretary shall act as the sole spokesman of the Order during the period of provisional administration."

The Neapolitan Father Alfonso Bruno is 44 years old. Until July 2013, he was the head of the media office of the Order and was mainly related to some incidents there. He was responsible of his website of the Order Mediatrice.net which published some dubious articles by Mario Castellano, where it praised the government of Mario Monti and the Eurokratenstaat EU. The same Castellano is close to Father Bruno, was known elsewhere through his articles in favor of Islam and for the construction of mosques in Europe.

While the Franciscans of the Immaculate Conception actively supported March for Life in Italy and marched in it as an Order, Mediatrice.net was deathly silent in both 2012 and 2013.

The website recently published an exuberant praise of the Jesuit Paolo Dall'Oglio, who was kidnapped on 27 July 2013 by Islamists in Syria. Dall'Oglio, was murdered by Jihadists according to the report of an Arabic website on the 12th of August, but could be neither officially confirmed nor denounced accordingly, was active until his abduction in a dubious "inter-religious" role in Syria. First of all because of his self-confession as "Catholic and Muslim." Secondly, because of his call to the Syrian rebels to use chemical weapons against Assad's government soldiers.

Father Bruno controls the Facebook page of the Franciscans of the Immaculate. There he mainly made known the fact that he himself gladly engaged in contradiction with the general attitude of the Order. Just as the provisional government of the Order was known, not a day went by without the media-savvy religious man to publish photos of himself in all possible variations from the World Youth Day in Rio de Janeiro.

His aversion traditional Catholics is also known to be raised against the Franciscan Sisters of the Immaculate Conception, the female religious branch, which he accused of an "intransigent" attitude. [I hope so.] It was he who,by misleading information to journalists, reported on the provisional government of the Order, which was known only to him, trying to steer in a certain direction against the Order's direction and against the Old Mass.

Father Alfonso Bruno is regarded as the real head of the then six-member dissident group who turned to the Congregation of Religious and then apparently was offered a welcome opportunity to intervene against the religious leadership. On 30 August, the most recent meeting between the Commissioner and the Apostolic Order took place with the displaced leadership. With the appointment of Father Alfonso Bruno as General Secretary and spokesman of the Order, it appears to be entering into what de Mattei predicted, that the Commissioner is according the antagonists of tradition in the Order and delivering the administration of the Order by the provisional government of the dissidents.

The leniency of the Founder with his ambitious pupil is taking a heavy toll. The picture shows Father Alfonso Bruno, who sat at the Papal Basilica of Santa Maria Maggiore, with Pope Francis. The change of pontificate seems to have delivered the decisive prerequisite for the action against the Order.

"The Franciscans of the Immaculate Conception, commencing with Father Manelli, run the risk of finding themselves outside of their Order," said Corrispondenza Romana.