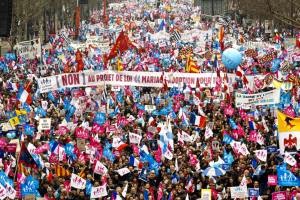 (Vatican) Pope Francis received Ludovine de la Rochere, the President of the French civil rights movement Manif pour tous  yesterday. The Catholic Church leader had invited the plucky French during the morning Mass in the guest house Santa Marta. The meeting took place shortly after.
This past January 24,  France's controversial President, François Hollande was received at the Vatican. On this occasion Ludovine de la Rochere picked up her pen and wrote a long letter to the Pope, to describe the situation in France. At that time, a Catholic initiative had collected more than 100,000 signatures on a petition within a few hours, which asked  the Pope Francis, to broach issues against President Hollande in which the government acted in flagrant contradiction to Catholic teaching. As far as known, these issues directed to Pope Francis  were not  addressed to  Hollande.  In any case, there  was an invitation for de la Rochere to the Vatican.
Manif pour tous emerged in late 2012 from the protest of millions of Frenchmen against the socialist, openly anti-Christian policy of the Hollande government. Manif pour tous is the answer to Marriage pour tous, and the law legalizing "gay marriage". Manif pour tous fights for  the defense of the family, the right of a child, to have a father and a mother, against adoption rights for homosexuals and against the gender ideology of the government.

[Update] now published in the Osservatore Romano there is a photo of the meeting between Pope Francis and Ludovine de la Rochere.  Famille chrétienne  de la Rochere said the following: "We had written to the Pope at that time, that the movement Manif pour tous will necessarily  oppose the threat of further legislation by the government. And we have asked the Pope to grant us a sign of support and encouragement. "
From that came the Vatican's invitation to Ludovine de la Rochere.  Pope Francis granted the Manif pour tous President five minutes. A surprisingly short time, considering that the invitation from the Vatican and Pope Francis was  made with Ludovine de la Rochere, certainly the  most important figures of  France today.
In a nutshell,  de la Rochere tried to report to the pope that  "the family is under attack from all sides" in France. As  Famille chrétienne writes,  the Pope replied that he'll think about the best way to send a message to the French.
Ludovine de la Rochere thanked him for the invitation, gave the Pope a Manif pour tous vest with the famous logo of the movement.  It shows without any text, a stylized family, father, mother and two children, who hold each other's hands. The wearing of the vest or sweaters with the logo in the public  will result in incarceration or be denied entrance into public places in France, such is the Jacobin “tolerance".
Text: Giuseppe Nardi
Image: Manif pour tous
Trans: Tancred vekron99@hotmail.com
Link to Katholisches…
AMGD
Posted by Tancred at 7:22 AM 5 comments: