The "Spirit" of the Council

In the wake of the Jacobin Conciliar Spirit, the high altar is exchanged for a dining table. Christ is moved from the center

The high altar (and thus the sacrifice of Golgotha) was pushed to the back by a so-called people's altar (which often looks like a kitchen table), as the east darker from now on.

Completely without necessity an extremely financially expensive piece of furniture was placed between the high altar and the community, which is the spitting image of a Masonic a master's table. Further below you will find depictions of the Masonic altar, which looks like its apparent twin brother, to be confused with the so-called people's altar.

The priest turns his back on Christ

Since the implementation of a suitable people's altar, the priest turns his ass to the altar and attracts the attention of the audience to himself. Through this priestly dominance, everything is presently focused on the priest: on his sex life, his disobedience, his inability in group dynamic etc.

Jesus Christ is barely present in the new Mass, since the sacrifice is offered in the new church facing the audience (versus populum).

It was a masterpiece performance of the Jacobin Conciliar Spirit to bring in almost all the churches a Masonic table in Catholic churches, forcing the priest to turn away from God and to turn toward God's people (versus populum).

From the new Catholic churches, lodges were un-Catholic temples in which disobedience, breaking celibacy and self-aggrandizement are to be preached and man emancipated from God. In the modern aggiornamento Church, the priest turns propagandistically to the emancipated group (versus populum), talks a lot of nonsense and suppresses the truth.

Thus the mass is cut from the truth, Jacobin Church people do not get bored, an atmospheric activity of games and  satanic self-celebration is entered into in the new Mass instead of being in the presence of the Victim.

Example 1 of a Masonic Master Table that could be immediately used as a folk altar (or will be): 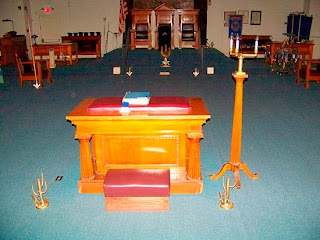 Example 2 of a Masonic Master Table that could be immediately used as a folk altar (or will be): 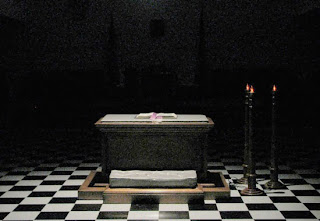 Example 3 of a Masonic Master Table that could be immediately used as a folk altar (or will be): 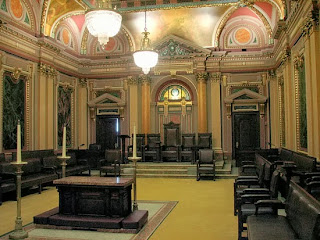 "Our system is not set up to tell the truth. It is not possible for those doing the work to say to those in charge 'this isn't working,'" -Father Anthony Ruff OSB

Edit: Father Ruff is the administrator of the haughty little "Pray, Tell" blog where people can go and commiserate the decline and inevitable fall of the Liturgical Renewal and new man-centered theology. "Rome" can be heard, almost audibly, saying, "you're accusing us of lying and bad faith?"

We've heard earlier this week about how Collegeville is cutting its ties with its lay run University. When are they going to admit they have nothing in common with Rome? They've already got an Episcopal Prayer Center where they host syncretistic gatherings. Why not admit the obvious and have some integrity? We also ask those at St. John's, where is Josh Guimond? 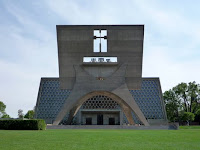 This current issue reported by the National Catholic Register is about a conference held in the trendy Greenwich Village, Episcopalian church of all places. This is simply another case of an effeminate Old Liberal Liturgist, bemoaning the fact that things aren't going the way of his narcissistic, progressive and increasingly unfashionable Marxist, disobedient, viewpoint, but it also serves to illustrate what we've been saying about St. John's Abbey at Collegeville forever.

If anyone had any doubts about the quality of this byproduct of the Liturgical Renewal up until this point, and the entire process surrounding ICEL, the fact that he spoke at a Call to Action conference, attacking the renovation of the English translation of the Missal, and the people who pay for his upkeep, should remove all doubt. He even goes so far as to tell us his true political allegiances, which are at least associated with Marxism which is merited by his self-description as a fellow traveler and disordered preoccupation with structural "injustice":

"I would love to belong to a community that was working for the transformation of unjust structures in church and society as well as offering direct outreach to the victims of oppression," he said. "But this fantasy religious community would also pray the entire office in Latin chant. So, I'm not sure I'm going to find many fellow travelers.[Emphasis ours]"

If he wants a posh liturgy with Latin chant and a trendy political ideology that wants to worry about "structure" and "superstructure" instead of one's own imperfections and unworthiness before the Godhead, he could become an Anglican. Assuming that he shares CTA's views, he could even concelebrate "Mass" with Bishopess Regina.

His apparent turn to the left aside, that First Things would have anything to do with Modernist Collegeville in the first place raises at least one eyebrow, but now we know about the "Pray, Tell" blog, or should know by now if you didn't before, that it's another byproduct of the disease which ails us in the Post-Conciliar malaise.

Take a look at the comments section and see the complaints about how Rome can't be trusted and so forth. The usual concerns by grey-haired denizens of sixty-eight about how Rome "can't tell the truth". As Father Ruff laments:

"Our system is not set up to tell the truth. It is not possible for those doing the work to say to those in charge 'this isn't working,'"

What's not working is the mentality of a man-centered theological and Liturgical course of the last twenty years. Father Ruff has been working like a termite throughout his career as a Liturgist, undermining and gnawing a way. But now he mercifully admits that he no longer believes. In what, we ask.

[National Catholic Reporter] The last time Father Anthony Ruff, OSB, came to New York, he was visiting with an editor from First Things, a theologically and politically conservative journal founded by the late Richard John Neuhaus, six years ago.

Ruff recently returned to Manhattan to offer the first presentation sponsored by the newly formed New York City chapter of Call to Action. Since CTA groups are rarely allowed to meet on Roman Catholic property, Ruff gave the lecture in the common room of an Episcopal Church in Greenwich Village.

This radical change of scene isn't the only transformation that has marked Ruff's life in the last six years.

Meet the Liturgical Jacobins of Collegeville

Editor: the language of the Mass has never been anything but elevated and hieratic. But there are some, let's call them  Liturgical Jacobins.  Russel Kirk once described the automobile as the Mechanical Jacobin.  If we could describe the car that way, how would we describe the Mass as it's said in Collegeville?  Liturgical Jacobins don't really care about the democracy stuff. While they complain about this Missal change being imposed from above, they don't recall how the Novus Ordo Missae is in large part, a summation of Liturgical abuses by Liturgical Revolutionaries like Father Virgil Michel of Collegeville, Dom Beauduin, Pius Parch and the Infamous Bishop Annibale Bugnini,  imposed on the laity, most of whom didn't like it when it came out and correspondingly voted with their feet by leaving the Church entirely.

Boy, Ruff, instead of worrying about enforcing your Jacobinism on the unsuspecting remnant in the pews, you should be worried about whether or not there will be a Collegeville to spread poison and ugly art in the next twenty years.  With an average age of sixty seven, at least half of the "Monks" in the Modernist Monastery will be dead in the next ten years with very few incoming vocations to replace them.  Awww, no more bad art, bad music and Modernism.  It's sad too, because at one time, Collegeville housed many brilliant minds, some of them probably orthodox, if the late, great Tom Roeser and St. John's Alumnus can be believed.  Certainly, St. John's will never produce another scholarly politician like Eugene McCarthy.

If we can take the current decline in numbers at Collegeville as a democratic vote for the New Mass which the praytell.com types love so well, then really, "the People" don't really want the New Mass at all. Although Pat Marker at Pine Curtain singles out abuse as one of the primary factors, there's a deeper reason for the decline in the numbers of vocations.  It's the Modernism.  Otherwise, how do you account for the enormous numbers of religious entering religious houses since the beginning of the Nineteenth Century and after?  The revival coming after the French Revolution was not really checked until the spiritual malaise of the Second World War and the dramatic debacle of the Second Vatican Council, which opened the windows and doors of the Church, it is said, and everyone left, mostly never to return.

It isn't the very rare but glaring and evil evidence of sexual predators lurking on the outskirts of the Pine Curtain, it's the Modernism, the Liberalism infested in the minds of the Monks that lead many to believe that there are no punishments, in this life or the next, for their crimes.   Indeed, the only punishment most are suffering are the diseases related to old age, very soft living and the starchy fare they consume in quantity in the Refectory.

COLLEGEVILLE — Change is never easy, and come November, it’s going to get harder for some Catholics to celebrate Mass.

The implementation of the English translation of the third typical edition of the Roman Missal will be “the biggest single moment of change for Catholics who worship in English in the 40 years since the revisions of the liturgy which followed Vatican II,” according to a lecture last week to the Church Music Association of America by Monsignor Andrew Wadsworth.

“The Missal is basically the prayer book for Mass, with all of the texts that are said by the priest or congregation,” said the Rev. Anthony Ruff, associate professor of theology at St. John’s University and School of Theology/Seminary.