Pope Francis: "I Started the Fire, I Will Put it Out Again"? 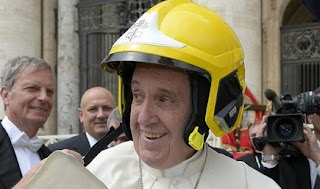 (Rome) "I started the fire, I will put  it out again." These were the words on the news page Secretum meum mihi (SMM) which they put in the mouth of Pope Francis for the photo and provides a context of the recent Apostolic Letter Amoris Laetitia  that has recently made visible the deep division and disunity in the Catholic Church.

"That should at least be what should happen in our opinion, but it is not yet done. That is the thought which has come to us at the sight of the above photo disseminated by Vatican," says SMM.
At the end of yesterday, the Wednesday audience, Pope Francis addressed firefighters. The group of a fire brigade came from  Fort de Demont in France and participated in the general audience in St. Peter's Square.


The photographer of the Vatican Press Office, who accompanied the Pope on his tour could caught for a few moments in which Pope Francis donned a fireman's helmet, wearing it as firefighters do on duty.  The French Firefighters made the Pope  a gift of it. The special feature: The helmet is decorated in the colors of the Papal States, Yellow and white.
At the same time, the firefighters presented the pope a pope mascot.
Text: Andreas Becker
Image: Vatican.va/OR (screenshots)
Trans: Tancred vekron99@hotmail.com
Link to Katholisches...
AMDG
Posted by Tancred at 10:30 AM 14 comments:

Email ThisBlogThis!Share to TwitterShare to FacebookShare to Pinterest
Labels: Humor

Nuns Rush the Papal Throne: "They Are Going to Eat Him!"

Edit: just for your amusement.  Perhaps they were admonishing him with love? 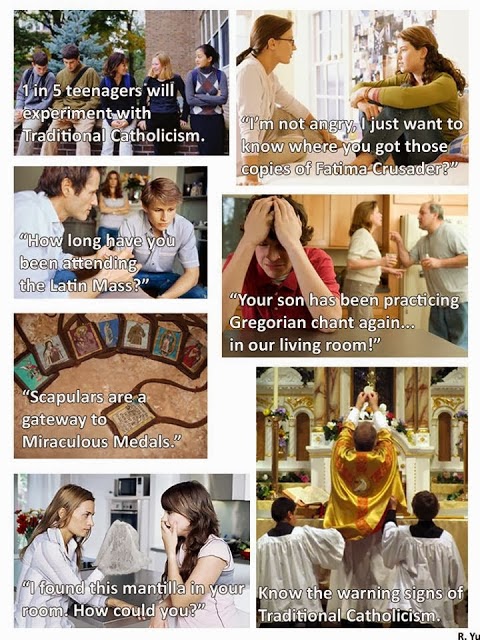 Edit: this appeared on katholisches.info this morning.  It was pretty good so we thought we'd post it.  They got it from chiesa e postconcilio.
Posted by Tancred at 10:03 AM 4 comments: