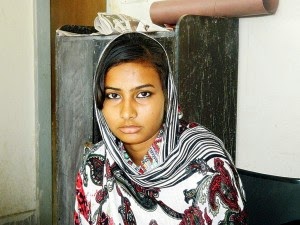 (Islamabad)  An 11 year old Christian girl, Maria Sarfraz was kidnapped and raped for three days by several men.  In the meantime, two Muslims were arrested as alleged perpetrators Since then, the family of the victim and the other Christian families have been  menaced with arson attacks and death threats.
As the Pakistan Christian Post reported, Maria Sarfraz was abducted from Sheikhupura in Punjab on the way to school. In another city, the abducted girl was held captive and repeatedly raped by several men. After the girl's father, Andrew Sarfaz, had reported her as a  missing person to the police, the girl was  located on April 28 and   liberated.

According to medical opinion, Mary was raped for three days by different men. The police arrested two Muslims, Muhammad Safdar and Muhammad Mehoob on suspicion of kidnapping and rape. Friends of the men have been putting pressure on the victim’s familyand other Christian families of Sheikhupura in the meantime. That if they do not withdraw the accusation, the homes of Christians would be burned down.
According to the latest report of the Pakistan Movement for Solidarity and Peace, every year more than 700 Christian and 300 Hindu girls and women abducted, forcibly Islamized and forced to marry a Muslim in Pakistan. Since the police and judiciary are unable or unwilling to take action against the perpetrators, most will not be held accountable. For this reason there is always a new kidnapping because the perpetrators feel safe.

Initially  in April, a group of Muslim men in Mally ki  in Sialkot district (Punjab) raped a   Christian girl  who was only 7 years old.  The girl survived, but is seriously injured. The police did not arrest the perpetrators but supported them in the abduction of Iqbal Masih, the father of the rape victim, "to force the family to withdraw the accusation," said the Pakistan Christian Post .
Text: Giuseppe Nardi
image: Tempi
Trans: Tancred vekron99@hotmail.com
Link to Katholisches…
AMGD
Posted by Tancred at 12:11 PM 6 comments: