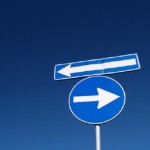 Edit: there was another book disseminated by an Argentine publisher, featuring the pope involving these themes, which the Vatican also distanced itself from, apparently.
(Rome) Two lesbian authors of "gender" books provided a letter from the Vatican Secretary of State for discussion, which was submitted on behalf of Pope Francis. The lesbians advertised this saying that the pope had "encouraged" the to "keep going."  The headline of Corriere della Sera (online edition) was on Friday: "Pope Francis Writes the Author of Gender-books: 'Keep going. '"

A denial from the Vatican came, in this case, as soon as possible. Together with Vatican spokesman, Father Federico Lombardi SJ,   Vatican spokesman Vice Father Ciro  Benedettini CP clarified: "The Pope has not encouraged the gender theory".

Rapid correction by the Press Office of the Vatican

The full text of the statement by the Deputy Vatican spokesman Benedettini, as published by the Holy See Press Office:

On answering journalists' questions the deputy director of the Press Office of the Holy See made ​​the following statement today from the morning:

In reply to a polite and respectful letter by Francesca Pradi to the Holy Father, the Secretariat of State has acknowledged its receipt in a simple and pastoral style and clarified in following, that this is a question of a private reply and it was therefore not intended for publication (which was unfortunately done).
In no way does the letter from the Secretariat of State wish to endorse practices and teachings   that do not match with the Gospel, but expressed desires for "to bear ever more fruit for activity in the service of  generations of the young and the spread of authentic human and Christian values."
The blessing of the Pope at the end of the letter applies to the person and does  not portend  any eventual teachings, that do not correspond with the doctrine of the Church, as the Holy Father has emphasized on several occasions in recent years. An exploitation of the contents of the letter is therefore totally inappropriate. 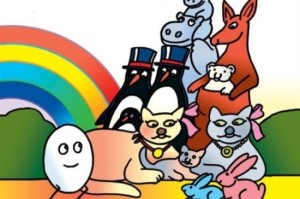 Francesca Pradis Aberrosexual animals, which do not exist in reality
This past June 19 Francesca Pradi had written to the Pope, and also sent him 30 of her books. In the letter she complained to have been attacked in the past year and a half by "homophobes", claiming that some Catholic organizations  insisted that she writes books  with content that does not exist in reality. Pradi is with her aberrosexual partner, Maria Silvia Fiengo, the founder of the children's book publishing house "Lo Stampatello" and the author of numerous "gender" children's books advertised as children for  "homosexuality".
Pradi's publications are on the list of books that could be removed from the Mayor of Venice, kindergartens and schools of the lagoon city.

Answer by the State Secretariat - "I was surprised and touched"

Pradi received from the Vatican Secretariat of State a letter of reply on behalf of the Pope, which is signed by the Assessor, Peter Brian Wells. The author made ​​the response public by claiming that Pope Francis had encouraged them in their actions, to "continue". She had been "surprised" and "touched" by  the words of the Pope, to spread to the gender ideology, so went Pradi's interpretation willingly supported and given by the Corriere della Sera.
The State Secretariat explained within a few hours by its press-service, that this  had  been a  merely routine letter of reply. Indeed, Assessor Wells  signs 60,000 such letters in one year. It had been a standard response of ten lines. To want to derive from that letter, a support and encouragement for the gender ideology, is totally inadmissible.
Pope Francis spoke repeatedly about the gender theory. On the 15th of April at the general audience he said most clearly: "The elimination of the distinction is the problem, not the solution".

What the Press Office makes clear and what not 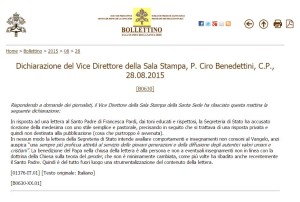 Correction of the Vatican Press Office
The Press Office of the Vatican made ​​clear the fact that the gender theory does not agree with the teaching of the Church and could not be supported by Catholics, which contradicts the teachings of the Church.  "One important clarification," said Traditio Catholica.
The Press Office also clarified that the words "keep going" were not used in the Vatican reply, but was fictitious from the lesbian author. In addition, the papal blessing is directed to the person and not some doctrine  in force.
The press office did not deny the existence of the letter, but gave the contents a different reading. But why is a "gender" author even supposed to "actively bear more fruit," although they had sent their books and were thus incompatible with Catholic doctrine, the ideological orientation would have been easy to verify. Is there anyone at the State Secretariat  to routinely respond or "routine"?
"The suggestion that the 'authentic human and Christian values ​​will be disseminated ' are laudable, creates the context but, at best, of an ambiguity. Likewise, it may be that the blessing of the person was not their ideology, but the person is a whole. They can not be separated from their ideas. That's like saying, 'I bless xy, but not the ideology that he represents'. That seems a sophism." said Traditio Catholica.

In a time in which there is no day on which the aberrosexual-associations do not invent a new "enemy" it wants to bring down; in a time in which the homo lobby, like a horde of beatniks that interject, as aggressive as it is exhibitionist  in its intolerant message, levity is in dealing with the gender theory and their representatives is a luxury that the Catholic Church and all people of goodwill can not afford. This has not altered anything, that the instrumentalization of the pope is obviously not against the Church, but against the mayor of Venice.
The studied architect and entrepreneur, Luigi Brugnaro has been Mayor of Venice since June 14, 2015. After 22 years, he managed to take the mayor's chair from  political left. The Conservatives have clear ideas about Gay Pride ("Carnival"), and gender ideology, which were sponsored by his leftist predecessors with zeal. One of Bugnaro's  first acts was to remove from the libraries of schools and kindergartens all books in which the gender ideology is represented. Since then he is a preferred object of hatred of the "gay" lobby.

The removal of the books also includes Publications by Francesca Pradi, including the richly illustrated story of two gay penguins, they are-- naturally-- male, adopt an orphaned baby penguin.
After rectification by the Vatican, Francesca Pradi took a quick turn. In one of the statements she's been  spreading around, it now reads:
"Pope Francis has not written to me, 'Keep Going'. His answer is not an opening towards homosexual parental families. But it's certainly a change of tone. He gives us the respect back that we deserve, as individuals and as families."
Text: Giuseppe Nardi
Image: Riscossa Christiana / Amazon (Screenshot)
Trans: Tancred vekron99@hotmail.com
Link to Katholisches...
AMDG
Posted by Tancred at 11:27 AM 24 comments: