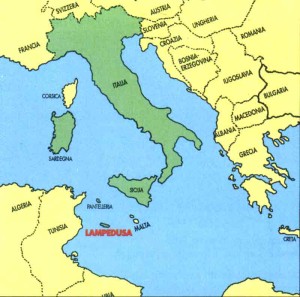 Edit: some people have friends who think you can make an orderly society where the rule of law out of any culture.  We suspect pecuniary motives for ignoring the problem, among more diabolical ones. Earlier popes were convinced Islamic immigration to Europe was a bad idea.  What's changed?  Certainly, Muslims are as hostile as they ever have been?


(Rome) The SSPX is sharply critical of the visit by Pope Francis on the island of Lampedusa off the Tunisian coast. The Italian District of the Society speaks of a "distorted progressive simplification" of a complex question, like the mass immigration of Muslims and especially to Europe.

"Since the 9th Century the popes, among them saints, have undertaken to equip fleets and preparations to ward off the (armed, of course) advance of the Muslims in the desire to preserve the Catholic faith where it had not been destroyed by the Mohammedan invasion. Pope Bergoglio wanted with his trip to Lampedusa, to reduce the question to a simple formula: There are the destitute, who are appealing to rich egoists, but they allow them to die at sea, and we rich are all guilty," said the Italian district of SSPX in a comment on his website.

"Even if this message should contain a small truth, so that it might be represented without serious complications as a problem. It is also true that no one should be refused necessary assistance in danger, but at the same time the Masonic plan for the creation of a multi-cultural society can not be underestimated, especially when one is Pope, and therefore is responsible for the defense of the Faith," says the SSPX.

Therefore, "the gestures and words of Pope Francis have been characterized by distorted progressive simplification from the celebration of Mass on a boat with sacred objects made of scrap. Gestures, aimed at rapid popularity for a particular audience and especially in the media," it says in the concluding comments of the Italian District of the SSPX.

Link to katholisches...
Posted by Tancred at 8:48 AM 3 comments:

Vaduz (kath.net/KNA)  The separation of Church and State in the Principality of Liechtenstein has taken another step.  In the Parliament of Vaduz 19 of the 25 representatives voted for the new law on religious association, as the Swiss media reported on Friday.

The law is the central element of the new organization of the relationship between State and Church.  Additionally there are constitutional revisions with the Catholic Church losing its special position as the National Church, as well as the concordat with the Holy See.

The Constitutional alteration will be put in effect in 2013 before the newly elected parliament.  Passing a fundamental law requires two further proceedings as well as pass with a two thirds majority.

In the new law regarding the recognition of religious societies, the Evangelical Church and the Evangelical Lutheran Church will be included. Over 75 percent of the 36,000 inhabitants are Catholic;  50 years ago it was still 90 percent.

The Archdiocese of Vaduz, which includes the entire territory of the small country, was established in 1997 by the Vatican.  A law from 1870 served as a legal precedent.

In the second reading the Parliament decided to establish the religious declaration at 14 years of age; in Switzerland it is set at 16.  It was additionally decided to restrict obligatory religious instruction in school to the primary school.

The recognized national religious communities will be financed by a mandated tax.  Those obligated to pay the tax can determine to which community his portion of tax will flow.

The government of Liechtenstein has stated that the prescribed religious communities shall receive 2 percent of the wealth and tax income of the nation and the community.  This corresponds roughly to less than three million euros per year.

The Concordat as applied to the property rights will be divided at the community level.  The Principality and the Vatican have already united on the level of negotiations.  Originally the signing of the agreement was planned for 12 December.  For "reasons of a deadline" they will probably not take place till the beginning of January 2013, it is said.

School Federation:  "The connection to the Church is already minimal at present" -- Auxiliary Bishop:  This enables the foundation of  "truly Catholic" grade schools, which the state had frequently suspended many in existence with disapproval.

Amsterdam (kath.net/KNA)  A large part of the Catholic grade schools in the Dutch diocese of s'Hertogenbosch will remove the description Catholic during the foreseeable year of 2013.

As the newspaper >>Trouw<< online (Monday) reports, that according to the determination of the scholastic board Signum, a large number of the 24 schools will eliminate the word "Catholic" from its self-description.

"The connection to the Church is already minimal now", stressed the Signum president Jan Timmers.  Of a break with the Church one could not say.  "We have been disengaging from the Church for years", says Timmers.  So, the schools will also celebrate the Islamic Ramadan at some time between Easter and Christmas.  Also the description of the scholastic mission statement will no longer be relegated directly to the Catholic Church, but to the "individuality of each child".

The Auxiliary Bishop in s'Hertogenbosch, Rob Mutsaerts, informed the report the following that it is better to
remove the designation "Catholic", because it doesn't correspond any more to the school's concept and moderating content.

This may enable the foundation of "truly Catholic" grade schools.  Till now the state has denied such new foundations and it has adversely managed numerous existing Catholic grade schools.
Posted by Tancred at 11:34 PM 6 comments: