Magnificent Spaniard Builds Cathedral by Himself

Today He Would Have Been Aborted --- This Genius Composed the "Salve Regina" 1,000 Years Ago 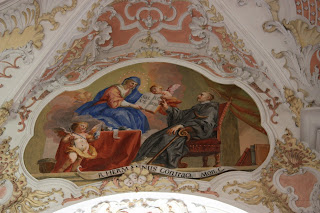 (Althausen) Today he would have little chance of seeing the light of day. The "humane" and "democratic" era of mankind is also the most dangerous, even deadly of the human race. In the "dark" Middle Ages, he was but allowed to live. He was born on the 18th of July exactly 1000 years ago in Altshausen in Upper Swabia, district of Ravensburg today. Hermann von Altshausen-Veringen, better known as Hermann of Reichenau.  From the Benedictine Order, on the island in Lake Constance, he was called because of his disability by the less sympathetic epithet, Hermann the Lame. He gave the world one of the most extraordinary, perceptive, and most wonderful compositions, the antiphon Salve Regina.

The small Hermann was visibly shaken, sick and physically deformed to the world. Perhaps because of a neonatal brain injury or an open back today, he would be killed, "out of charity".  However, his parents and Wolfrat Hiltrud of Altshausen were devout Christians, and also worried about the little Hermann, as well as his other 14 brothers and sisters.
From an early age he was called the "crooked" because his physique was so warped. Just standing was impossible for him throughout his life, nor could he move. Even in the chair especially made for him by his parents, he had  difficulties sitting. His fingers were too weak and too crooked for writing. Lips and chin were so deformed that you could barely understand his words. The family was wealthy and a child like this, would have been hidden by others. Hermann's parents worried about their child's future, decided to put him in safe custody.  A charge that would support him in the event of their death. They handed their son to the Benedictines of the Abbey of Reichenau in Lake Constance, donated by Charlemagne. "Here is the mind which was opened due to religious psychotherapy. Anyway this boy who could give more sounds than words themselves," the modern biographer Cyril Matindale.
There was not a moment in his life where Hermann the Lame could make himself comfortable and cozy. Pain always accompanied him in his infirmity. Nevertheless, all contemporary chroniclers describe him with amazing adjectives, of course, in Latin: kind, friendly, always smiling, tolerant, open-minded, accommodating, helpful, polite with everyone. Everyone liked him, him the crooked, curved, heavy laden.
He was eventually taken up by the monks even in their community. The stabilitas loci of the Benedictines was now not only in the sense of protective parents, but as his true homeland. The abbey was his home, earthly and spiritual.
He studied mathematics, Greek, Latin, astronomy, music and even Arabic. He wrote a comprehensive essay on the astrolabe , an astronomical instrument. What initially seemed a burden to the monastery, was to be its pride. The reputation of Hermann the Lame was so great that the Emperor Henry III. in 1048 and Pope Leo IX. in 1049 visited especially the Reichenau.
But not only as scientists and historians were drawn from Schwabe, but also in music. His great passion for music combined with his great piety and spiritual passion, devotion to the Mother of God and all purest Virgin Mary. It is in fact as certain that the famous Marian antiphon Salve Regina of the Hail Holy Queen, was composed and texted  by him before 1054, the hunchback monk with the crooked fingers,  on the island of Reichenau. His genius gave the world one of the greatest and most wonderful works of sacred music, a plant, a prayer, still resounds today 1000 years later around the world. A reverent greeting, with which Christians seek the help of the Blessed Mother of God. A wonderful song, written by one who himself could not sing.
On his deathbed, he exhorted his brother Berthold: "Friend of my heart, do not cry. Do not cry for me! But think about it every day, that you too must die. Prepare yourself with your whole strength against it, to make the journey, because one day, at an hour that you do not know, will you come with me."
Hermann, died on the 24th of September 1054 at the age of 41, surrounded by his brothers, who were his friends, after he had received Holy Communion one last time. In 1863 he was beatified by Pope Pius IX.
We hear the famous antiphon, which he which he also composed the simple, impressive and solemn melody written and that he himself could never sing:
Salve, Regina,
mater misericordiae;
vita, dulcedo et spes nostra, salve.
Clamamus Ad te, exsules filii Evae.
Ad te suspiramus,
gementes et flentes in hac valle lacrimarum.
Eia ergo, Advocata nostra,
illos tuos misericordes oculos
ad nos converte.
Et Jesus benedictum fructum ventris tui,
nobis post hoc exsilium ostende.
O clemens, O pia, O dulcis Virgo Maria.

Hail, holy Queen,
Mother of Mercy,
our life, our sweetness
and our hope, hail!
To thee do we cry, poor banished children of Eve,
to thee we sigh,
mourning and weeping in this valley of tears.
Turn then, most gracious advocate,
thine eyes of mercy toward us,
and after this our exile, show us Jesus,
the blessed fruit of thy womb.
O kind, O gentle, O sweet Virgin Mary.