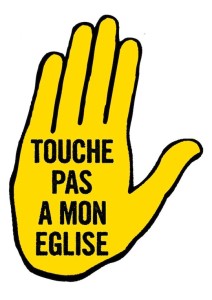 (Avignon) On Monday, the 20th of May a march will take place in the south French city of Avignon against anti-Christianity, The initiative is being planned by a group of young Catholics. They are reacting with it against the increasing violence against priests, religious and ecclesiastical facilities in the city of St. Ruf. The most recent incident was a violent attack of four suspected North African Muslims against a priest of the St. John Society on May 13th.  The four attackers struck the priest unconscious.

The march isn't only directed against the antagonistica and aggressive disposition of parts of the Muslim  inhabitants of the city, rather in general against the anti-Church climate.  In the demonstration, the organizers deplore the scandal "Piss Christ" from April 2011, as a museum in Avignon as an "art work" of a crucifix placed in the urine of the "artist".  Or against the insulting parades through the streets of the "city of the Popes" and the damage of a cemetery of Valréas.  "The anti-Christian hate grows (blasphemous theater pieces, desecrated churches etc...)"  is named in the outcry of the young Catholics.  "We are complaining with emphasis on the lack of a reaction by the authorities and a part of the media, when it comes to the desecration and profanation and we complain with stress on the absence of any reaction against the violent attack on a man of the Church."

The initiators also call out not to tolerate hostility to the Church. "We observe the Cathophobia as an attack against the identity of France of of the French."  The young Catholics are calling upon the "World culture and the homo-lobby".

The young Catholics call upon the  "World Culture and the homo-lobby", in their struggle against homophobia, "to put a stop to our defamation". [Good luck with that.]

"We appeal that the State President and the Interior Minister who are so prompt to condemn the poor situation of Muslims, hostility against Islam and anti-Semitism, to do their duty by Catholics, who have been defamed and injured by anti-Christian attacks.  We are not second class citizens."

With their appeal, the initiators call upon "all people of good will", to "take part in our protest" themselves.  The March begins on Monday, the 20th of May at 2pm at the Place du Palais of the Popes.   "We hope that many French Muslims and Jewish believers will take part in the silent march".   A logo has been created for the demonstration.  A black edged, yellow hand with the slogan:  "Hands off of My Church".  The colors recall on the Identity Movement, a structureless, informal and spontaneous new movement,  which has its origin in France.