Above: Roadside sign announcing Yoga and Zumba and pointing to the church. 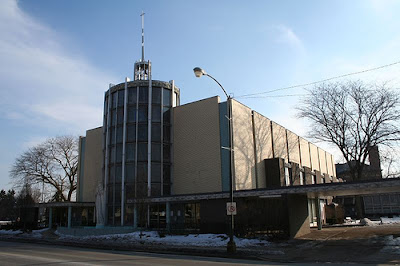 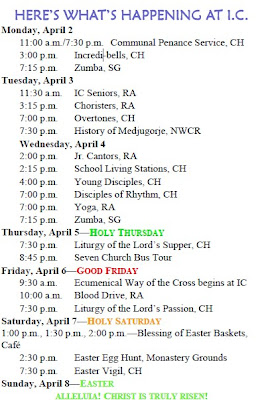 A roadside sign outside of the parish announces Yoga and Zumba classes this upcoming week (Holy Week!) Page 8 of the bulletin of the parish (http://icparish.net/bulletins/040112.pdf) and the parish calendar (http://www.mychurchevents.com/calendar/calendar.aspx?ci=G1H2I3I3K5K5O9L6I3) announce these events as well.

Fr. John Hardon, S.J. wrote an excellent article about why Yoga is incompatible with the Catholic faith: http://www.catholiceducation.org/articles/religion/re0275.html

Oh and Zumba? Well here it is on youtube in case you have never heard: http://www.youtube.com/watch?v=Vf0q6qtThF4 Appropriate exercises to hold at a Catholic parish?

Even if it could be argued (it can't) that these are appropriate exercise activities for Catholics to be participating in....aren't there better things to announce on a roadside sign outside of a Catholic Church during Holy Week?
Posted by ExtraEcclesiamNullaSalus at 3:00 PM 20 comments:

Chicago Archdiocese Monsignor: Ron Santo's funeral was not a Mass but a "prayer service to appeal to all religions"

The service, as explained by Monsignor Dan Mayall, himself a diabetic since his teen years, was not a mass but prayer service to appeal to all religions. Spiritual readings were offered by John J. McDonough from the Juvenile Diabetes Foundation and John F. McDonough formerly with the Cubs and now with the Chicago Blackhawks.