“I’m just so used to John being our leader,” Rabbi David Saperstein, the Reform Jewish movement’s longtime D.C. representative, said last week after describing what he called Carr’s role in convincing a major senator of the impact of climate change on the world’s poor. Carr, it turned out, wasn’t actually at that meeting. But that’s the way it is with Carr — he’s been so influential for so long that sometimes Hill faith lobbyists just assume his involvement in key events. -California Catholic Daily 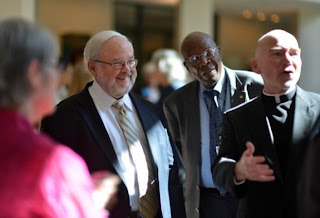 Edit: after a generation of influencing the Catholic Church, helping to run it into the ground, he's retiring early, at 62'.

We shouldn't have to look too far to find reasons for why this man's influence has been destructive.  He established the debate supporting Obamacare in the first place, and then tried to play a rearguard action against Obama when what anyone with any sense knew would happen, that he was going to expect Catholic institutions to fund birth control.

He came under fire for being responsible for supporting homosexuality and abortion through the CCHD, and he was a polarizing figure, giving the impression that a Catholic could disagree about Catholic doctrines regarding abortion and homosexuality and yet still remain Catholic.  Maybe someone in charge is finally listening to those who've identified this man's corrosive policies and active promotion of moral evil?

Many readers over at California Catholic Daily are relieved he's going, but who will replace him?  Will it be someone who lives and breathes the Catholic Faith, or one who is bent on continuing the American Church's downward spiral into social irrelevance?
Posted by Tancred at 1:34 PM 1 comment: