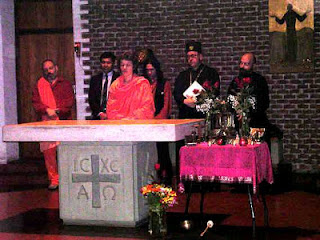 (Buenos Aires)  In various Argentine retreat houses, Catholic religious communities may offer Magic Seminars, in which occult teachings are introduced.   Here are "alchemistical and cabbalistic rituals" which even yet profane the chapels and altars of the retreat houses.

The most recent incident took place last weekend in the Contemplative House of St. Francis of Assisi of the Capuchins in the Diocese by the same name in the Province of Buenos Aires.  From the 24th to the 27th of January was "Maga Hania & Conspiradores" in the retreat house "in accion".  An equivalent of 420 Euro allows those interested to be introduced to the "cabbalistic rosary" and "alchemistical novenas",  in order to become acquainted with the "Alchemy of Love" and the occult secrets of the attractivenss of "Venus Aphrodite".

The seminar program also included a "magian night ritual" in the "clothing of Aphrodite" in the swimming pool of the contemplative house, in order to obtain the "energetic controls" of the "currents of magnetic love".  All of this are naturally for the "enlightenment of the world and of people".

The Argentinian writer and "Maga" Hania Czajokowski explains on her website, that after taking "spiritual journeys" to Brazil, Africa and Polynesia and  she had then been "consecrated in occult secrets",  which she then wants to give back "for the healing of the earth".  The home cooked, business oriented cocktail of esoterica, occultism, a bit of Marian cult and Padre Pio, a dash of Buddhism, a healthy portion of cabbalism is available naturally for a corresponding payment.  For a  payment the Catholic contemplative house is apparently opened for occultists, including their magic rituals at the altar.

Such contemplative events by Maga Hania and her "conspirators", as she calls her adepts herself, and other purveyors of occult practices already have taken place before till 2009 in the Catholic Casa de Retiro San José in the Argentinian Diocese of Lomas de Zamora, till the Bishop there prevented them.  They still found however a new location.  The operators of the seminar are included in the dubious "Universal Parliament of the Religions of Argentinia".  Yet it doesn't operate like a federation of religions, but clearly as a private circle of pompous names of religious "activists" doing their own thing.  Among them there are also by his own description an Argentinian convert to the Orthodox Faith, who calls himself "Bishop Alexandros" the "Autocephalus Catholic Church and of Orthodox Content" and is industriously consecrating more "bishops".

In Assisi House of the Capuchins, seminarians of the order were included, who in the nearby Jesuit led seminary are preparing for the priesthood.  Because of the lack of growth the house was put to other purposes.  It belongs to the order, but is led by the laity, who clearly allow every paying customer to use it.  A reaction from the current Bishop of San Miguel, Msgr. Sergio Fenoy, who has been notified of the occult seminar offer in the retreat house of San Miguel, is not known at present.  "The current Catholic authorities in the Diocese are showing little discernment in its easy commerce with the occult business practices", says Pagina Catolica.