Bishop Morlino Says No to Sentimentalism at Funeral Masses

Editor:Most people don't know how to act in a variety of situations. Especially at a Requiem Mass. Most of them don't know what it's for. Not entirely their fault. Their parents didn't tell them what Catholicism was about, their Bishops were busy attending the theater or having Zen workshops.. Generally, people in suburbia get up and cover themselves and their families in shame by giving eulogies. Heaven forbid that you call them on it either. This is a very good sign for orthopraxis, and a sign of orthodoxy.

Of course, there's going to be a mealy mouthed jackass who's going to whimper bitterly about this and how he's going to join the Ba'hai or some such thing.


The Badger Catholic: Bp Morlino takes heat for correcting funeral liturgies in his diocese
Posted by Tancred at 4:57 PM No comments:

Thanks to Badger Catholic, we've just got this link with a lot of photos about Bishop Morlino's new adoration chapel, here.  It's amazing what can be done in Red Madison, Wisconsin. 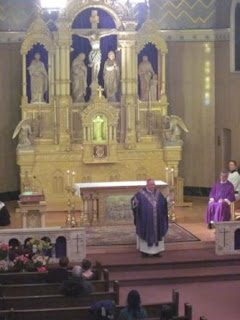 In a letter recently, Bishop Morlino deals with the tactics of a group of layity trying to get rid of what sounds like three fairly traditional priests using the tactics regularly employed by dissident groups like VOTF. In an emboldened section, Bishop recognizes this fact, encouragingly, by Badger Catholic.

Furthermore, activities such as protest-letter-writing seminars, leafleting of motor vehicles, doorto- door canvassing for signatures on a petition, etc (that is, exerting organized political pressure on people, where the end justifies any means) is an appropriate tactic in a political campaign, but not in the communion of faith which is the Catholic Church. Groups such as “Call to Action” and “Voice of the Faithful” regularly employ such tactics against legitimate authority in the Church. Because these groups dissent from basic tenets of Catholic Doctrine and Discipline, they are not recognized as Catholic in the Diocese of Madison, much less are they able to exercise legitimate authority. It is my hope that these clarifications will prove helpful.

Posted by Tancred at 8:54 AM No comments: