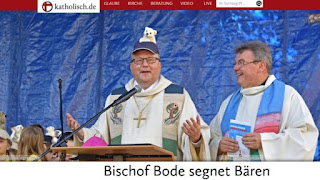 Like Father Z, we've been suggesting penance for the Bishops for a long time too. We just belatedly stumble across his post in another forum. Even Cardinal Meisner has been urging greater Penance on the part of priests.  Remember when the Irish Bishops were supposed to make some sort of Lenten Penance for this issue of abuse.  It would be nice to see them do penance for their other crimes, like Archbishop Diarmuid Martin showboating, making ambiguous statements about homosexuals and pretending to be a problem solver?  Anyhow, we digress, thanks to Father Z for posting this.  We might also point out that the idea of Penance is sorely lacking amongst the laity as well.  Indeed, we didn't call Penance the "Sacrament of Reconciliation" back in the day, we called it "going to penance" for which you received penances from the Priest, however small, however great.


Haven't seen the transcript, but the reporter talks about the "structural sin".  There is no such thing.  Sins are always personal in nature.  Institutions may be capable of creating Hell on earth, but they don't go to Hell, people do.  Here's Bishop Bode performing penance:

Just as a small point, the commentators of the ancient and true Douay-Rheims version of the Bible, refer to the protestant mistranslation of metanoia as "repent".  As the English Fathers point out, it's supposed to be "do penance".

It's a clever way of making us forget that we ought to make use of the priestly office and do penance this advent for our sins for which we deserve death?