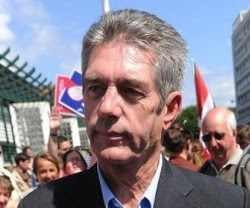 (Paris), Jean-Michel Colo is the mayor of the French town Arcangues. He announced his decision that he would not perform the "gay marriage" legalized by the government of President Francois Hollande in his community, "because it is a farce," said Colo.The law "is not for but against something, it gives an inadequate and absurd privilege for a tiny minority, but it attacks the family, for whose protection the marriage exists," said Colo.
"I'm not  giving any lessons and call on no other mayor does to follow my example. But I will not perform an illegal act," said the mayor of the municipality of Aquitaine.
"My seven council members agree completely agree with me that in this fare, we  'do not participate in this, and we thank the thousands of support and congratulatory messages we have received for our decision." Jean-Michel Colo. since 1983 mayor of the 3,100 -inhabitant village near the southwestern French town of Bayonne, near the Atlantic coast and the border with Spain.
The law imposed by the Socialists law provides severe penalties for non-compliance. Whomever as a public official denies or impedes the implementation of the law faces five years in prison, up to a 75,000 euro penalty and the immediate removal from office.
In April, just before the adoption of the "gay marriage" legalization by the French Parliament, Franck Meyer, spokesman for the platform Mayors Pour l'Enfance (Mayors for  Childhood) had stated that approximately 15,000 mayors of France will refuse "to conduct  marriage between two persons of the same sex."  Hollande, the Socialist government then declared that there is "no freedom of conscience" in the matter related to civil servants and public officials.
Interior Minister Manuel Valls has already threatened  Mayor Colo  with the statement that the laws are to be applied and any breach of this duty would be punished with the rigor of the law.
Two homosexuals who've recently deliberately  intended to file for "marriage" in Arcangues, have filed charges against Mayor Colo with the Bayonne Prosecutor's Office..
Text: Giuseppe Nardi
picture: Religion en Libertad
Trans: Tancred vekron99@hotmail.com