Celibacy: Is Pope Francis Going to Ordain Married Deacons to the Priesthood in Mexico?

(Rome) The divorced and remarried and homosexuality are only two fronts. Behind the scenes there is struggling in the Catholic Church about much more. A meeting began at the Pontifical Gregorian University in Rome this afternoon, whose theme in view of the circumstances of the time has been particularly explosive: "Priestlly celibacy is a path of freedom." The Cardinal Secretary of State Pietro Parolin and the Prefect of the Congregation for Bishops, Cardinal Marc Ouellet will be siding with the defense of priestly celibacy in the Latin Church. "But Pope Francis gave the German bishops again to understand that he wants to break with this tradition", said Vatican expert Sandro Magister.
Read more »
Posted by Tancred at 11:42 PM 23 comments:

At the Innsbruck Basilica of Wilten there are concerns about an offensive sculpture for the agitation of the faithful -- accompanying this is a course by Roman Siebenrock, a signator of the anti-Roman Theological Memorandum.


Innsbruck (kath.net)  After the outrage surrounding the photo exhibition in the Innsbruck Cathedral, the Faithful are reporting now another noteworthy scuplture in the Basilica of Wilten,  which has aroused the displeasure of some of the faithful.  The exhibition "Ecce homo" by the south Tirol artist Lois Anvidalfarei was displayed at the beginning of Lent in the Wiltener Basilica.  Accompanying the sculpture is a religion course taught by theologian Roman Siebenrock. Siebenrock received his doctorate studying under Peter Hunermann in the Theological Faculty of Tübingen and is a signator of the anti-Roman Theological Memorandum. 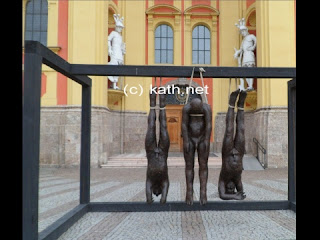