ADL Calls For Banning of Trump from Twitter and It Happens 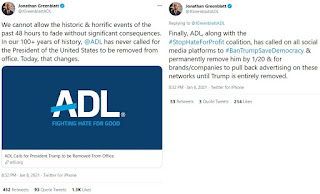 AMDG
Posted by Tancred at 6:32 PM No comments:

ADL Calls the Shots in Vatican?

Edit: as if there were really any question. Real Catholicism is to be squelched and undermined at any cost.
[Tablet] On Thursday, a delegation from the Anti-Defamation League met with Pope Francis at the Vatican; ADL director Jonathan Greenblatt said the pope’s “moral voice is so needed today.” In a speech to the delegation at the Hall of Popes, Pope Francis, who has spoken out against anti-Semitism numerous times, and has visited Auschwitz, showed his respect for the ADL while denounced anti-Semitism in all its forms.
Here is a large chunk of Pope Francis’ powerful speech, which should be read in full:

Whereas the culture of encounter and reconciliation engenders life and gives rise to hope, the “non-culture” of hate sows death and reaps despair. Last year I visited the Auschwitz-Birkenau extermination camp. There are no adequate words or thoughts in the face of such horrors of cruelty and sin; there is prayer, that God may have mercy and that such tragedies may never happen again. To this end let us continue to help one another, as Pope John Paul II so desired, “to enable memory to play its necessary part in the process of shaping a future in which the unspeakable iniquity of the Shoah will never again be possible”: a future of genuine respect for the life and dignity of every people and every human being.