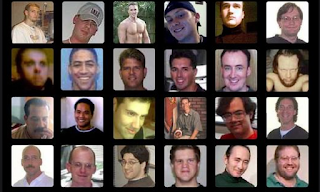 Edit: Josh Guimond disappeared 20 years ago on November 10th at Saint John’s Abbey. Despite the unusually large number  of sexual degenerates and criminal sodomites currently and then located at Saint John’s Abbey, the local authorities are directing their expert attention away from the Minnesota Abbey. Considering past bungling by Sterns County, it’s hard to understand why they are so highly esteemed by the media.

The national press has deigned to cover the story now that the Sterns County Sheriff’s Department has released a lead. They’ve  provided a photo collage of young to middle-aged males who might know who Josh was. (None appear to be related to the Modernist Abbey)

The context of the photos is unclear, but it is now more than apparent that Josh was active on gay dating apps, according to the Podcast by civil rights attorney Josh Newell.

There are no photos in this collage of Dan Ward, the credibly accused sex predator Coach of Josh Guimond’s debate team, but it would be  pointless perhaps to seek questioning  of the violently deceased Bruce Wolmering, who was active as a floor monitor in a dorm nearby. Wolmering was adept at hypnotism and employed it in his practice.

This fine piece of work probably knows more than a list of randoms Josh was looking  at on gay dating sites that the Abbey’s Sheriff’s Department is presenting. Andert  used hypnosis as a parlor trick with students in the dormitory at St John’s. He most likely abused a prominent politician’s very troubled son.

These sickos and many others, roam the countryside and have often been given positions of trust by Abbot Klassen who is supposedly not aberrosexual.

You can’t make this up. A lot of the Monks, including  the Novice Master, I’m told, aren’t into Latin, but they are really into Latinos. This poor kid better run! Watch out Pedro!

We don’t know if Sterns County has perused Jerome Tupa’s pornographic “art”.   When we first saw it years ago, it just looks like weird abstraction. Eventually, it became obvious. One can not unsee, having  seen Tupa’s sadomasochistic and very gold plated, drawings. One friend of Tupa’s referred to him as, “the man with the golden junks.”  One of the few places a person can view this crap is on Eponymousflower, which has tried to highlight the evil and degeneracy of Collegeville for over a decade.

these are the real vatican 2 documents. Imagine sending your son to a catholic college to be educated by 'religious' monks: "I have had an interest in and have been
professionally involved.in sexual edueation for nearly thirly years now. I particþated in my first SAR (Sexual Attitudes Reassessment) workshop at the University of Minnesota Program in Human Sexuality (PHS) in October 1974. Ipwticþated in a second SAR in Tucson, AZ, September L977 , v,thiie doing my doctoral studies at the U of AZ, and a third back at thê U of MN, Jr:Iy 1983. These were intensive ttuee day workshops and each began on Friday evening and continued into Sunday afternoon. They challenged each participate to healthily reassess their attitudes, beliefs, and values about sexuality.

"After the 1974 SAR I conducted two modified SAR's on the SJU campus on two different
weekends at eachof which approximately fiffy or more CSB/Sru students participated. CSB and
SJU faculty and psychologists from St. Cloud and SCSU particþated and helped facilitate these three day professional workshops. They were very well received by all in attendance. Thes//e wére the fust workshops of their kind offeied on these campuses. Upon my retum from graduate sðhool in 1978 i began offering Sexualþ Groups for sixteen member5r-,8 SJU and I CSB students. I conducted these each semester for several years. In 1985 I introduced ihe first course on Human Sexuality into the psychology cwriculum, I have taught it on a somewhat regular basis up to and inciuding the ourrent Spring Term 2003.

"InNovember ,lgilzItryas a te¿rm'member of a Campus Ministoy sponsored retreat àn Human
Sexuality at Koinonia Reüeat Center. In 1982'83 I co-organized and co-presented a six-part
series on Human Sexuality for students. On Ocûober 8, 1986 I presented the '?sychological
Dimensions of Intimacy" to the St. John's Seminarians. This is by no means a taxative list of activities relating to Human Sexuaiity I have been involved in since 1974. Itis a sample. ... Respondent commented that he was watching Tiger Woods on televísion and that
"he wa6 not a fucking tiger Woods fan" and TV commentators were giving too
many statistics about Tiger, Respondent then made the comment that "next thíng
you know they'll be measuring his (Tiger's) erection."
- Respondent made a reference to a student that complainant knew fron and who had graduatedinMay2002. Respondent told complainant that {,vas like a "dog in heat" and he was "selícing a lady in Lacrosse." He talked more about how iikes to "ssrvice" young women. He mentioned that he had dinner with at Red Lobster.
- Complainant felt uncomfortable with respondent's comments about so he
asked how respondent's classes were going this semester. Respondent responded
by saying "sex is good," Complainamt was confused with this response, and asked
"what class" respondent was referring to. Respondent again responded, "Sex, it's
good." And then, "Sex class ... human sexuality ... it's great, we don't hold
anything back."
- Respondent then told. that hE hears from the track guys, that complainant
'þees in the shower in the gym." He then said, 'I'lI be honest, I really like peeing
in the shower, you get a good jet stream of pee and it's like a mini orgasm,"
- Respondent asked compainant when he started wearing lipstick. Complainant sajd
he didn't wear lipstick, Respondent.said that he Saw complainant's picture in the
paper and his lips looked red and asked when he started wearing lipstick,
- Respondent ended by asking,complainant to stop by sometime to visit.
https://www.andersonadvocates.com/wp-content/uploads/2019/12/Bruce-Wollmering-File-part-2.pdf

This is just crazy even by EF blog standards.

What’s crazy about it?