"Beware of false prophets, who come to you in the clothing of sheep, but inwardly they are ravening wolves. By their fruits you shall know them." - St. Matthew 7: 15-16

Edit: while some Bishops are concerned with abuses of the Liturgy and holding hands, other Bishops and Abbots, are seeing to it that their parishes are stocked with unsuitable and evil men, as if they wanted to curse, rather than bless, the Faithful, even putting the women and children in serious moral and even physical danger.

Going back to the very earliest days of the so-called Sexual Revolution to today, there has been what can only be described as a festering malignancy at a Modernist Monastery in Collegeville, Minnesota, where a decadent clergy is bitterly fighting to hide and continue living out its evil crimes. Patrick Marker, who operates the Pine Curtain site, which is devoted to exposing this evil, has released a letter sent on January 7th to 1,100 residents of a the town of St. Joseph, which has been overseen by the Benedictines of Collegeville for more than a century and a half.  It is also the home of the currently missing Jacob Wetterling.

Its current pastor, a man by the name of Father Jerome Tupa, is very much the kind of decadent pornographer, in fashion during this vulgar age.  He can be easily be compared to another such man whose works were proudly portrayed in Austria at St. Stephen's Cathedral, where Cardinal Schönborn exhibits the depraved works of a Communist named Hrdlicka, whose remains even desecrate the Cathedral cemetery, hang there to this day.  Some of Tupa's ourvre below, where he works in the medium of actual gold to represent the sexual organs in his eroticism: 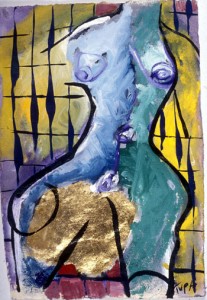 Father Tupa enjoys a great deal of freedom and esteem today, and operates with impunity. In addition to being an "artist" whose distorted paintings reminiscent of madness and drug addiction has been turned loose on the small parish, in the home of the still missing Jacob Wetterling, despite being accused of being a sexual predator himself. As Pat Marker writes of a monk who suffered at Father Tupa's hands:

How different might Saint John’s had been if monks like Father Jerome Tupa left the monastery to pursue their own selfish pleasures and allowed individuals such as these two men, who were called to monastic life, remain! How many good men did Father Tupa drive from religious life?

The former monk himself writes:


“… my memories of those days are negative ones. There certainly seemed to be a great deal of ‘sexual’ tension and many of the monks seemed to have agendas aside from monastic brotherhood. As a young man and monk I ended up very confused about the whole experience. Upon leaving the monastery all those years ago I have never returned to the Catholic church. Although still a ‘believer’ I’ve just never gone back.”