Edit: after grifting for years on the Catholic Church, and writing frequent attacks on the motives and aspirations of Traditonal Catholics, Skojec is now blaming them for the strident and violent response of militant atheism against theism.

That weed Steve is imbibing is really doing the trick! Holy Steve is growing in confusion and malice. I’ll bet that what Steve considers the justifiable reaction of atheism, includes the mass murders of Christians for the last three centuries.  It’s clearly their fault.

He’s even crazier than Marcy Shea! I wish Marcy would renounce Catholicism and stop feeding at the New Church trough. 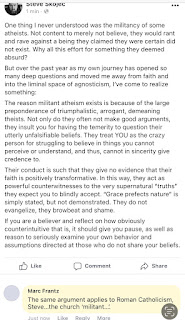 Skojec is agnostic now and wacko Mark Shea is all in with the death cult lead by Democrats. Fat boy has the sads all over social media that Roe v Wade has been overturned:

Those two are made for each other. Mark Sashay ponders: who's gonna adopt the black babies?
https://youtu.be/ryKePZIyCRM


As for Steve, if 🍁pot is the ticket out, why is Thug Gordon still on the reservation?

The separation of the sheep and goats, real prophets and false, continues........

This is the result when a man doesn’t have an actual job. A street sweeper is more dignified than that creature. He thinks he’s a philosopher king. Laughable. He’s nothing but an untalented fifth rate hack.

Steve may have gotten his pot from Thug. No one can verify if he got fired for using it, but he was known at Garces as “The Candyman” for selling it.