On Wednesday, Pope Francis received several "trans women" during the "Pride Month" on the fringes of the general audience in St. Peter's Square.  In the background Sr. Genevier, who started the meeting.

(Rome) At the end of last Wednesday's general audience, Pope Francis met a transgender group.  Six "trans women" and the mother of a "trans boy" were able to approach Francis and speak to him individually.  The meeting was organized by a French nun who lives on Rome's "outskirts".

Transgenders are sick people who reject their natural sex and claim to be of the opposite sex.  In short: men claiming to be women and women claiming to be men.  In recent years, it has been aggressively promoted that the gender is fictional, "assigned" at birth, but can in fact be changed at any time.  This mainstream-sponsored denial of reality according to the Pippi Longstocking principle, according to which everyone "makes" the world as they like it, corrupts thinking and weakens the spirit.

On June 22, Pope Francis met six “trans women”, i.e. men who claim to be women, on the sidelines of the general audience.  The group consisted of one Italian and five foreign "women" and the mother of a "trans boy".  They would have "felt welcome", as Fanpage wrote afterwards, citing the group.

Pope Francis recommended that they "not get caught up in prejudice against the Church".

The meeting was "unexpected and symbolic", enthused Fanpage.  This is all the more true, according to the medium, "when you consider that it took place in the month of gay pride, demonstrations and rainbow colors". 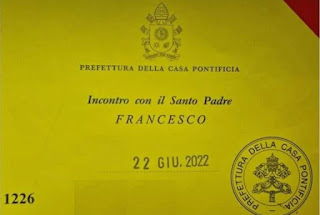 "Alessia", who may have been baptized as Alexander, is the author of the book "The Invisible Girl", which was published last February.  According to their own statements, the former he and now she are “invited to schools and prisons” to talk about their own experiences.  This is all very confusing, as it inevitably is when one denies reality.  The book was presented to Pope Francis at the meeting on Wednesday.

The meeting was organized by the French nun Sr. Genevier, who lives in Rome's Luna Park (fairground), one of the "fringes" of society.  It was she who suggested the meeting to Pope Francis, and not without reason at the right time in the "gay month".  When she told him it wasn't just about a "trans woman," he replied:

“We met in the Vatican with the nun and a priest belonging to the Christian group LGBT+ Christians Nazionale TRANSizioni, a project of La Tenda di Gionata.  The Pope received us individually and I was the first.  Being able to bring my book to him was a dream come true.”

"He didn't want me to kneel, he shook my hand, and when I introduced myself as a transgender girl, he replied that he didn't care who I was, that we only had one father, like he wanted me  say: You are [to me] a sister.

He took the book and said to me: 'Bravo, you did a good job writing your story'.  He then counseled me to always be myself but not to get caught up in prejudice against the Church.  Often we transgender people, too, who are victims of prejudice, nurture prejudice against others and we think that the Church does not accept us no matter what, and we do not even seek encounter.  I, on the other hand, feel welcome, taken by the hand and hugged.  I think this is an important message during Pride month.  The best thing about the conversation with Pope Francis is that it was simply a meeting between people and not about our differences.”

The person, who self-identifies as Alessia, posted the accompanying photos on Instagram and provides some details.  After her, the Pope welcomed five other Argentine "trans women".