Edit: the Cure was “psycho” indeed.   Holy Steve claims to have read a lot of the 800 page biography of Saint John Vianney, but so much of it, like Catholicism in general, has left him feeling alone and dissatisfied.

Holy Steve had formerly been single-handedly trying to save the Catholic Church with 1Peter5, which he recently sold off to someone else, but he still takes time off from hiding out from Covid, playing computer games, savoring Macanudo cigars and boozing expensive single malts to post on his Twitter, the usual fare and his posts full of his observations of things and people he disapproves, and girlish idioms like, “whipping yourself till you bleed all over the walls?? GROSS!!! I CAN’T EVEN!!”

He’s even mad at his FSSP parish priest, apparently. Just not mature and wholesome enough for Holy Steve!

When he’s not attacking his parish priest, and other Catholics in his parish for being “neurotic” and “mentally ill”, having noisy kids, he’s talking about his own deep understanding  and emotional outbursts at Catholicism and how much it pains him that the Church Suffering falls short of what he thinks is authentic and “rational”.

I can’t wait till he becomes Orthodox so he can micromanage their spiritual patrimony.

Of course, Vaxxtard Holy Steve is "fed up" with Trads! How dare you challenge the government! 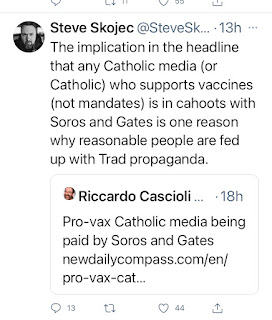 Doesn't he live in Maine now?

Pray for the long-suffering wife who has to deal with this thing on a daily basis.
He is so indignant with everyone, just think how he treats her.

He’s deeply effeminate, and thus totally conformed to this world.

He had an unfortunate upbringing and possibly kicked in the head by a pigeon when a child.

I noted that Francis would cause the crevice to widen significantly in the Church; that the traditionalists would be fine because they know Tradition is the path to stay faithful to Christ. Modernists would be overjoyed because Modernism loves Novelty and its turmoil. Yet, the Conservatives would become severely distressed as they realize that they must now choose a side as the crevice increasingly widens their stance threatening their decades-long balancing act. I also warned Steve that many conservatives would not decide until it was too late, thus falling into the crevice.

Very Sad to see Steve fall into the Crevice of Francis, cursing both the Modernists and Traditionalists as he falls. He only needed to step both feet onto Tradition's side.