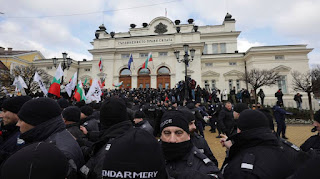 Edit: they’ll need to do better than that if they want to stop this. They’ll need to unseat their government like they did in 1989.

[Miami Herald] Protesters opposing COVID-19 restrictions in Bulgaria clashed Wednesday with police as they tried to storm the Parliament in the capital of Sofia.

A heavy police presence prevented protesters from entering the building and some were detained. Several people, including police officers, were injured during the clashes. Eventually, the protesters were pushed back and police cordoned off the building.

The violence erupted at a protest rally against mask and vaccine mandates organized by a nationalist group that is fiercely opposing the Bulgarian government's anti-epidemic measures.