Is Pravda Fanning the Flames of Civil Unrest?

Edit: Just a couple of stories showing some dishonest reporting from Pravda. Shocking, I know, Communist news organ trying to whip up violence and make the job of establishing order harder for police officers and National Guard.

In one situation, an officer lightly touches an uncoordinated elderly man who foolishly and illegally approaches a line of riot police, causing him to topped backwards on his head. Meanwhile, some commentators on the WFBO twitter are doxing the officer that was just doing a difficult job. It's a job that might not be as hard as keeping "millions" of Catholics informed in today's Church, but a very hard one nonetheless. This tragic event (the man may die from that injury) is being castigated by the usual Marxists ruling New York who routinely make law enforcement more challenging than it needs to be:


[Pravda] A chilling video captured an elderly protester being shoved to the ground by officers in Buffalo as they moved in to clear the area after the curfew. The man could be seen lying motionless while bleeding from his ear.

Graphic footage shows police officers swarming the area in front of City Hall in Buffalo, New York right after its 8pm curfew went into effect on Thursday. As police advance on protesters, a man with what looks like a smartphone in his hand approaches the officers leading the procession in an attempt to confront them.

It’s unclear from the video what the man tells the policemen (in full riot gear), but the confrontation did not last long before he is forcefully pushed by the officers, losing his balance and falling backwards onto the pavement. A trickle of blood can be seen flowing from his ear after the fall. As police call medics to the scene, the man appears to be unconscious, lying motionless in the same spot. 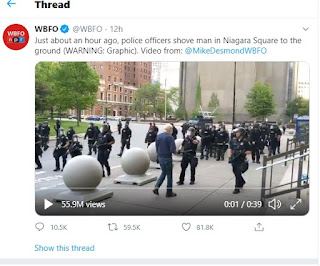 In another scene Pravda mendaciously claims an officer had clubbed the rioter in the head as he was interfering with a police arrest:

[Pravda] A student accused of attacking a policeman during a protest in Philadelphia has been cleared of wrongdoing, with footage of the incident belying the assault allegations and showing officers unleashing batons on demonstrators.

All charges were dropped against the 21-year-old student, Evan Gorski, on Wednesday after prosecutors viewed online videos of the encounter, according to Gorski’s attorney, R. Emmett Madden.

“The police were lying. We had a protest against police brutality, and then police brutalize my client and try to frame him for a crime he didn’t commit,” Madden said. 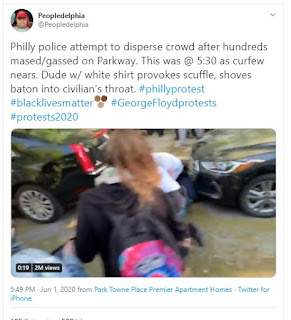 It's almost like Pravda wants to inflame rioting by deliberately misrepresenting things as they occur.

Pravda was founded as a Communist voice piece. But even a reactionary regime opposed to US hegemony in the world would still try to hit on the US. The US is the great defender and guarantor of zionism and the Enlightenment. Still, Truth should be Truth. And Pravda is not being nice to the point of dishonesty.

I usually like rt articles, but am aware of their radical anti-Americanism that sometimes arises in editorials by Satanists like Dugin.

I think the evil Chinese would be behind this more than Pravda and the Russians, though they probably have their hands in it too...as well as maybe Iran.
But watch out for China.....and Chinese in general. Friends they are not.....anywhere.

Yes, China hates Christianity, particularly the Catholic Church. They hate Bible Christians and persecute them , but not as much as the Catholics. Each Bbile church is independant of the other, which is why the Chinese consider them dangerous. House "churches" spring up everywhere, and are bulldozed just as fast. But they have no central leadership, so there is no root for the Chinese communists to attack, unlike the Catholics. In the old days, for them to attack the roots (Rome, the Vatican), and the tree would wither. Because in the old days, Rome(Vatican) stood for the True Mass and Faith, and that was a danger to the Communists. Today, with the agreement between "pope" Francis and his Vatican and the Chinese, the Chinese consider the Catholic Church as a weakling religion that now they can bully and persecute, even after the agreement. They know that unlike the old days, there will be no condemnation of the persecution of Catholics by the Vatican of Francis....and there hasn't been.
Within limits, the Chinese allow for the spread of Taoism and Buddhism (except the lamaist/Tibetan brand) of Buddhism. I'm a model, and have been to China 3x. Never to Tibet. Torist areas are very attractive. Go off the beaten path though, and it's largely slum living, or in the villages like the 16th century sanitation wise, etc.
But they respect the Dalai Lama the way they used to respect Catholic Popes (even though they hated them). Pius XII was probably the last Catholic Pope they truely feared, because he represented a strong Faith, which, if persecuted, would arouse world opinion. Just like the Tibetans. When the Dalai Lama spoke up against persecutions, the Chinese backed off alittle, fearing world opinion. When they attack the Catholic Church now, nothing comes from the Vatican....except from brave men like Archbishop Vigano (who I'll bet becomes a Cardinal in the next pontificate if we get a CAtholic pope), and Cardinal Zen. Nothing form Francis.
So with regards to the Church, or foreign affairs, or anything.....trust the Russians before ever trusting the Chinese.

The real incendiaries are employees of Rupert Murdoch. Foxnews and its print siblings thrive on social dislocation and conspiracy theories. Trump is one of its most prominent junkies.

I beg to differ. Usually by this time of year, I've been on 1-2 photo shoots for my job, but with the Corona virus, I've been reduced to staying at home, and working part time as an agent, as a recruiter for new talent,, even for movies.....which although boring and tedious desk work compared to what I am used to, jetting around the world the last now nearly 11 years on scouts and shoots. But I've also spent time watching alot of tv. I watched Govenor Cuomo's excellent press briefings during the height of the pandemic in NYC, and was amazed that he could ad lib the daily reports so well and so fair mindedly. Not so his brother Chris, the radical liberal Trump hater who along with the rest of his CNN crew, and MSNBC, CBS, NBC and ABC news has degraded and disparaged our President during this pandemic no mattter what he has done. No one could have done better.....but the above networks have fanned the flames of hate for Trump, just as they are doing it again over this George Floyd issue.
It is rather the above six or so networks, and not FOX, who has thrived of social dislocation and conspiracy theories ( the phony Rissoa meddling in the campaign, the phony impeachment hearings. etc.).
All those Trump hating reporters should be fired.