Another Traditional Order Falls to the Bergoglian Commisar 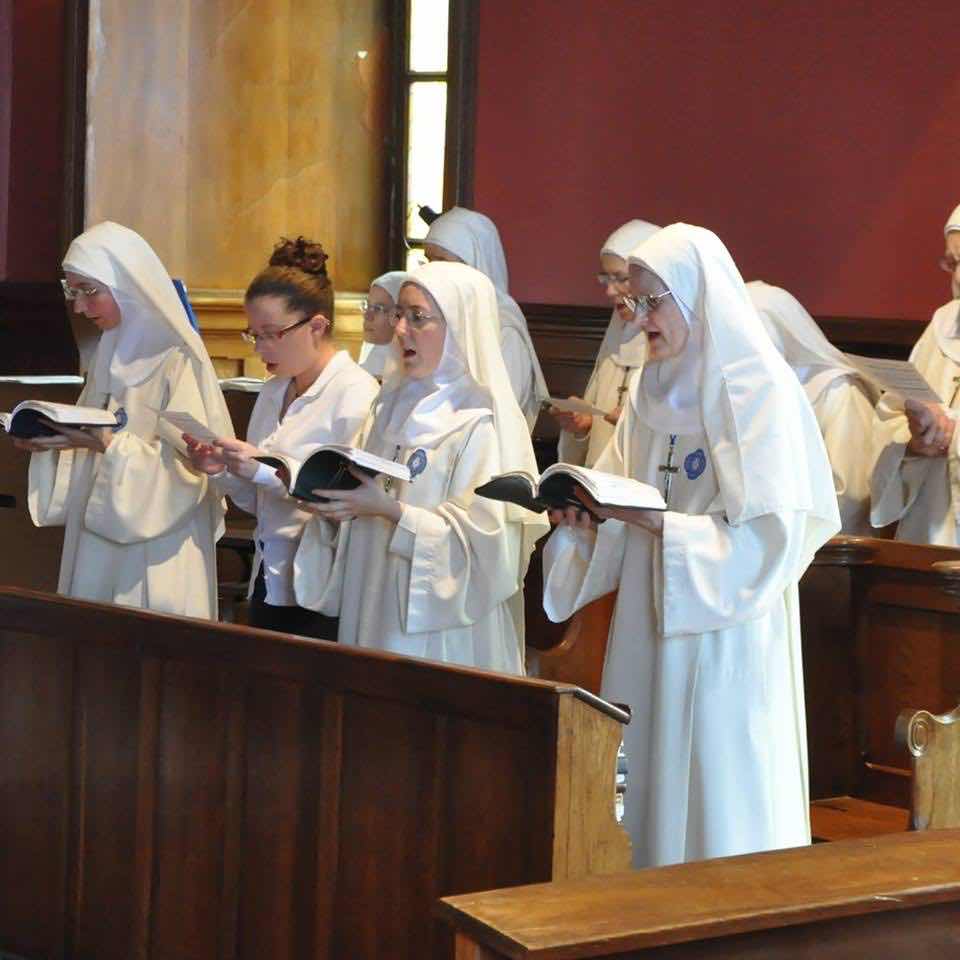 Little Sisters of Mary: The next traditional order falls victim to the Commissar.

(Rome) The Vatican is destroying another traditional order: the Petites Sœurs de Marie, Mère du Rédempteur, the Little Sisters of Mary, the Mother of the Redeemer. Ninety percent of the sisters have asked for release from their vows because of the interference of Rome.

Founded in 1949 by Mother Marie de la Croix (Maria Nault), the Order of Women has four branches in the French dioceses of Laval and Toulouse. The sisters had been transferred to the Novus Ordo in the wake of the liturgical reform after the Second Vatican Council, but under Pope Benedict XVI. in 2012 they returned to the traditional Roman rite. 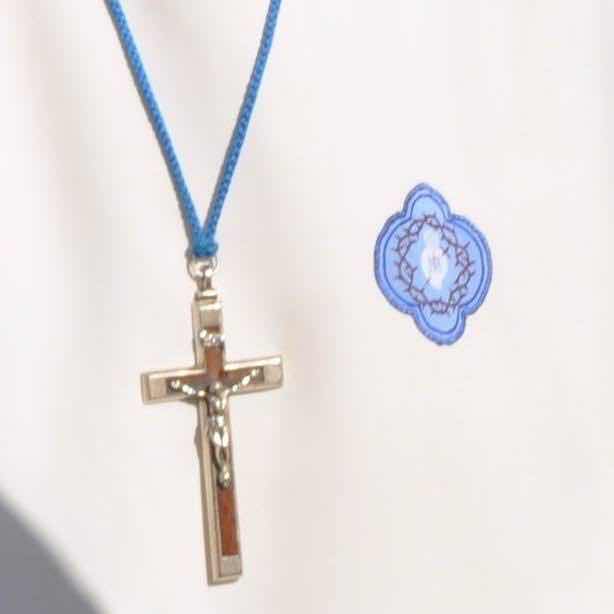 Order of the Sacred Heart and Crown of Thorns symbols

This is a step that has not been favored in some Church circles in France and especially in Rome. In the situation with the Franciscans of the Immaculate and the Priestly Fraternity of the Holy Apostles, the surprising resignation of Pope Benedict XVI., cleared the way to take action against these orders, which disrupted the neuronal "consensus.”

In 1989 the Order was canonically recognized by the then Bishop of Laval as an institute of diocesan right. The diocesan Bishop Thierry Scherrer, who had been in office since 2008, "appears to be bergoglianized," according to Riposte Catholique. Above all, he seemed offended by the idea of ​​penance, which is part of religious spirituality.

The Little Sisters of Mary experienced canonical visitations in 2016 and 2018 and were accused of "sectarian" tendencies. Such forms can certainly exist in the Church. However, the term is even more a cipher with which modernist church circles discredit faithful, religious communities, orders and prayer groups, in the better case smile and mock, in the worse case persecute.

The religious concerned describe the final report of the second visitation as "a caricature" of reality. He was unadulterated "prejudice".

The Mother Superior and the novice master were removed from the monasteries and exiled to remote places. In their place, Rome appointed three commissioners of "modern" orientation. The intervention of Rome took place at the request of the local bishop. According to the Vaticanist Marco Tosatti, it is also about "episcopal appetite" for the real estate property of the women's order. In any case, laymen of the diocese who are close to the Little Sisters suspect this.

Like the Franciscans of the Immaculate, the Little Sisters of Mary share the rediscovered love of tradition. "A love that awakens the worst instincts in the current leadership of the Holy See," Tosatti said.

The Little Sisters of Mary are active in the care of the elderly, they work in parishes, help the poor and live a spirituality that seems outdated today in the Vatican: the love of Eucharistic Adoration, the prayers of intercession, sacrifice and the Marian devotion.

Already in 2009, the local bishop tried to take action against the sisters. At that time Pope Benedict XVI. still ruled in Rome, which is why the attack was unsuccessful. 2016 was different. The bishop had slandered the sisters at the Order's congregation in Rome because of "suspicion of traditionalism". An accusation that has been meticulously and eagerly taken up by the papal court.

As with the Franciscans of the Immaculate, it out of
vengeance that a New World Order returned to the traditional rite, but was not released from the Order's Congregation and placed under the protection of the Pontifical Commission Ecclesia Dei. Nothing seems more to be more of an affront to the Congregation of Religous by Cardinal Braz de Aviz and Curial Archbishop Carballo than a "penetration" of tradition into the great stables of the new Catholic Orders.

And as against the Franciscans of the Immaculate, problems in the Order's administration were claimed and used as an excuse for intervening. The fact that 33 out of 38 women religious gave Mother Mother Superior an excellent judgment did not matter. The Order was "praying too much", the Order had to implement the "new theology of consecrated life," and similar accusations were made that reveal little substance, but all the more ideology.

The Congregation of the Order decreed and upholds the provisional administration, although the sisters are determined to defend themselves against "slander" as they say.

Unlike the Franciscans of Immaculate they were not denied the right of appeal. Cardinal Raymond Burke was Prefect of the Apostolic Signatura in the summer of 2013. Burke was deposed by Pope Francis at the end of 2014 and replaced by the Vatican diplomat and former "Foreign Minister" of the Holy See, Msgr. Mamberti. Unlike Cardinal Burke, Mamberti seems incapable or unwilling to act against unjust decisions of the pope. The appeal of the Little Sisters of Mary was rejected.

The nuns saw no other way but to go public. They announced that their order was placed on 17 September by Cardinal Prefect Braz de Aviz under provisional administration. "We do not accept that," said the religious women, who refer to the canon law possibility to be released from the Order.

34 of 39 nuns have sought this release because the Order is no longer the same due to the Roman Attack,  to which they wish to belong and to whom they have pledged by virtue of their vows.


"We are 34 out of 39 sisters who have requested the release from the Order’s Congregation. We do not make this sacrifice lightly: we wish to remain in communion with the Church, but we can show neither clearer nor more painfully that it is impossible for us, for reasons of conscience, to obey what we have been forced to do. "

In the diocese of Laval, there is a circle of friends to support the religious, which counts more than 3,000 people.


I support this. I think it’s the path FFI should have taken as well.

More evidence that Bergoglio and his henchmen are evil bastards.

The agenda is pretty plain since 2013.

In 20 years' time, Traditional priests in France will outnumber those of the Novus Ordo persuasion. The Church's Eldest Daughter will flourish again despite the machinations of those who have drunk far too much Vatican II Spirit.

Nothing wrong praying to much, We need this praying in this corrupted Words. GOD BLESS THEM.

These Sisters should affiliate themselves to the SSPX. Disregard Francis and Bras de Aviz.

Every day Francis is hated more and more.

Let's see, these nuns cared for the poor and elderly. Had an active prayer life and a following of about 3,000 "friends" who probably attended Mass on a regular basis, went to confession and lived the Catholic faith. Yet Francis and his minions were threatened by this little, albeit effective, order. What won't these people due to bring ruin upon the souls entrusted to them? There must be a special place prepared for them.

The modernist are ‘offended by the idea of ​​penance’.
So is Satan.

Francis and company prefer the aged, 78-80+ year old habitless, dissident, radical liberal "nuns on the bus" type nuns that are criss-crossing the USA spouting hate against the Trump administration and speaking out for every/any left-wing social cause , while never mentioning Jesus Christ. I don't think they even know how to pray.

This is the type Pope Francis prefers. No surprise, he's exactly the same as them.

I wish there would be another huge scandal involving Pope Francis and his Vatican...so vast and all encompassing that he would not be able to escape and he and his people would be brought down and out.

Cor Orans, which is responsible for the destruction of the female orders, is pure spirit of Vatican II.

The 'destruction' of female orders and male orders is the result not of Vatican II but of the natural cycles in the history of the church. Decades ago, if a young Catholic person wished to serve in the caring professions, pretty well the only way that could be realized was by joining a religious institute. Others do these things now and they don't have to resemble or ape the Amish either.
Religious are not the only ones who can pray and serve.

Which completely misses the point of the article. Yet another useless, degenerate post.

It seems that the majority of the Sisters have chosen voluntary separation from their religious institute instead of accepting the alternatives. A sensible path may have been for the sisters to amalgamate with another community with a similar spirit and facing much the same challenges of a sclerotic obsolescent charism.

Peter is a Protestant, I am sure. Or a burnt out rad liberal Vatican II cheerleader Catholic priest/permanent descon

That comment, like the rest of your narrative, is way of mark. Your sense of judgment, lauded by a few, is hopelessly lacking.

All traditionalist orders, and especially trad leaning OF ones, need to immediately transfer ownership of all their properties to lay run trusts. #nomorecash

Or a virus probatus who officiates a black Mass at the local Masonic Lodge.

Or a virus probatus who officiates a black Mass at the local Masonic Lodge.