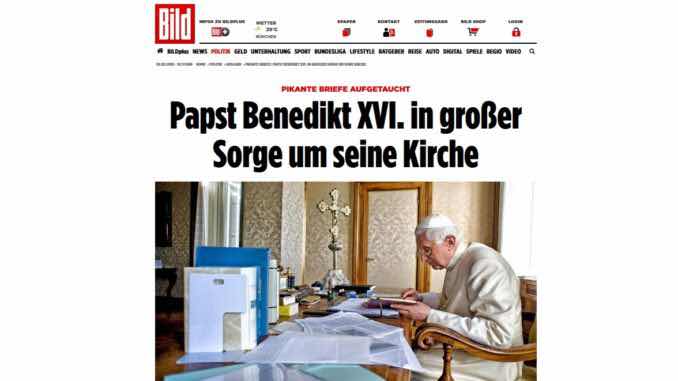 What about the state of health of Benedict XVI? Is this for real? The most recent picture of the head of the church (2005-2013), to whom many glances are directed in the current Church crisis.

(Rome) In Germany, media reports, Benedict XVI. has compared his resignation with the resignation of Pope Pius XII. in 1944, when he feared being taken hostage by the National Socialists (see When did Benedict XVI comment on the pope's crisis?). In Brazil it is also reported that the former Pope suffers from Parkinson's.

The Bild-Zeitung published extracts yesterday from a letter that Benedict XVI. sent in November to an unnamed German cardinal. The letter is startling, because the eighth German Pope of Church history seems to indicate that he has resigned in fear of his life. So far he has repeatedly insisted that his historically unprecedented renunciation took place voluntarily.

Since then, new questions have been raised in the room.

Meanwhile, Bergoglians have been enthusiastic about the picture article. First and foremost, because it distracts from Pope Francis, who is in severe distress because of the US abuse scandal. Especially, however, because the Bild newspaper spread the thesis with its article that Benedict XVI.’s resignation is due to the current Church crisis. His opponents had always claimed the opposite. Those forces that hindered Benedict's pontificate wherever they could applauded his resignation frenetically. At present, however, they are obviously reaching for every straw to support Francis. The Vatican still seems to have no clear ideas about how to deal with the incriminating Viganò dossier. 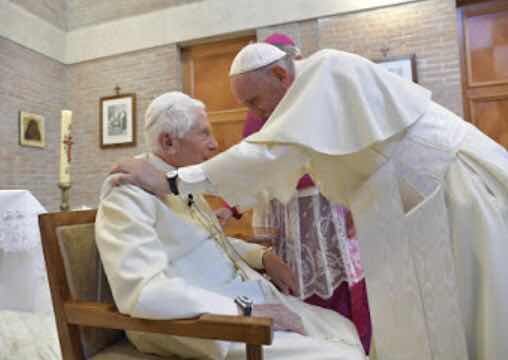 The Bergoglian also finds satisfaction in the fact that the Bild article shows a conflict among friends: not conservatives against progressives, as has been shown for decades, but Ratzinger against Ratzingerians. That's why they immediately pointed to Cardinal Walter Brandmüller. He was the unknown cardinal to whom Benedict XVI. wrote a "letter of anger". This dramatization fits into the "image", namely the Bild newspaper, which belongs to the globalist media and never stands on the side of Benedict XVI in ecclesiastical questions.

In Brazil, meanwhile, the magazine Veja reported on "The Martyrdom of Benedict XVI".

But first a look back:

Last February, the media reported "death rumors surrounding former Pope Benedict". His brother, Msgr. Georg Ratzinger, was "concerned about the state of health" of Benedict XVI. In an interview with Neue Post, he spoke of a "paralysis" that affected "my brother Joseph.” “The biggest concern is that the paralysis could eventually go to the heart. And then it can be over quickly.” And further: "I pray every day for a good hour of death for me and my brother. For both of us. That's a big wish we have."

The Vatican press office hastened the brother of Benedict XVI. to deny:

"The alleged news of a debilitating or degenerative disease is wrong."

On the health of Benedict XVI. the Vatican explained:


"He feels the burden of the years, as is normal at his age".

Now, the Brazilian magazine Veja reported on Benedict XVI that "the Pope suffers from the symptoms of Parkinson's, a disease that could have contributed to his decision.”

The magazine appeals "exclusively" to Church representatives who "are close to the emeritus pope":


"Benedict XVI. suffers from Parkinson's and already felt the signals of the disease when he stepped down. "

His daily routine was "very limited because of the disease".

Veja does not mention the source of information that remains anonymous because it is not authorized to speak publicly about the health of the former Pope.

In support of the claim, Veja refers to the illness of Pope John Paul II. He had "suffered from Parkinson's since 1996". Only in 2001 did his personal physician speak of it for the first time in an interview. In addition Veja: The "Polish Pope died in 2005, without the Vatican officially confirming his condition.”

According to the Brazilian weekly magazine, the Vatican behaves now with Benedict XVI. just like that. The official reading is:

The latest known picture of Benedict XVI. was on 22 August by the Vatican Foundation Joseph Ratzinger - Benedict XVI. posted on Facebook. It shows Benedict with Don Simone Billeci, lecturer at the Theological Faculty of Sicily. Don Billeci presented Benedict in the garden of the monastery Mater Ecclesiae, the unpublished dissertation, previously edited by him, by Michael Johannes Marmann. Marmann's dissertation was supervised by Ratzinger during his teaching career at the University of Regensburg. The preface to the publication is by Cardinal Gerhard Müller.


Fake news to raise the ratings.

What is interesting is Pope Francis being attacked by Der Spiegel, Ann Barnhardt, and
Associated Press on Sept 18th which implies that the Tribe has turned on him.

They either do not have need of him or that he has become useless (failure) to them. They don´t like failure ask Weinstein he was thrown to the dogs to avert from pizzagate.