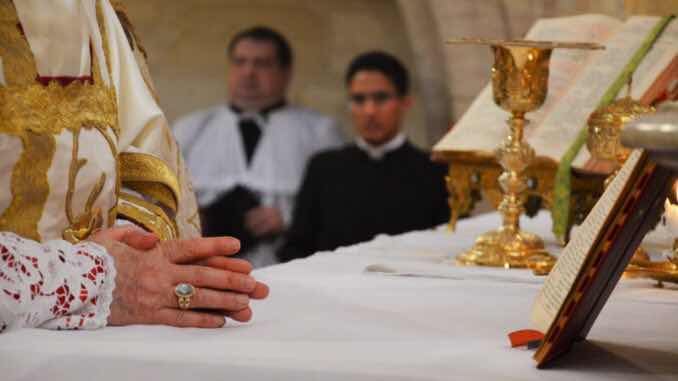 The Good Shepherd Institute has been part of the Old Rite Ecclesia Dei communities since 2006. The community was founded by Abbé Philippe Laguérie, who was ordained a priest in 1979 by Archbishop Marcel Lefebvre and joined the Society of St. Pius X (FSSPX). 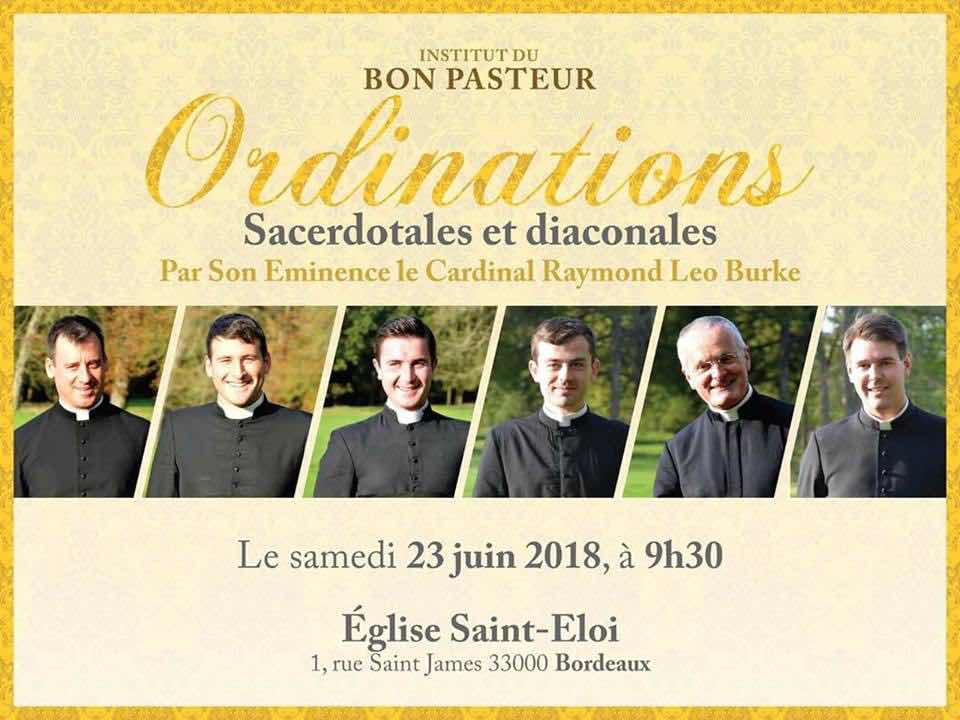 Priests and Deacons in 2018

In 2004 he was expelled from the Society because of internal criticism. Then he founded with four other priests the Institut du Bon Pasteur, which returned to unity with Rome and was canonically established as a society of apostolic life. The purpose of the institute is above all "the formation of priests and the defense of the holy traditions of the Church in the liturgy and doctrine, against the modern errors.” For this reason, the Institute strives for a new evangelization in the sense of tradition.

In addition to the four new priests, two deacons were consecrated last week.

The mother house of the community is located in Bordeaux. The seat of the founder and Superior General, Abbé Laguérie, is Courtelain, where the institute's own seminary St. Vincent de Paul is located. There are currently about 40 seminarians preparing for the priesthood.

The Community currently has offices in France, Italy, Poland, Brazil and Colombia.

Email ThisBlogThis!Share to TwitterShare to FacebookShare to Pinterest
Labels: Institute of the Good Shepherd

God Bless all of them i say.Thank God for such men!The True Mystical body of Christ is growing and the Conciliar-meet the world -Church is dying!Holywell shrine for me on Sunday as part of The Latin Mass Society pilgrimage.God bless Tradition!

"Sorry, but "Cardinal Burke" was did not receive Episcopal Consecration as a Catholic bishop... Novus Ordo "bishops" are not going to give the Church valid priests.

Yes, my Lord. So authoritative!

Who cares?
He's part of the Modernist problem. He's "conservative" in the sense that he's not clamoring for Communion for adulterers, but still spineless.

So who cares he's adding more of his priests?
They're not fully Catholic, therefor not Catholic.

It gets tiring to see folks propping up this man as a savior for the Church or a demigod. He's neither.

"Who cares?
He's part of the Modernist problem. He's "conservative" in the sense that he's not clamoring for Communion for adulterers, but still spineless"

As much as I like Cardinal Burke, (and wouldn't it be a kick in the head to the liberal camp of losers if Cardinal Burke or someone like him became the next Pope?) he is spineless. Whatever happened to his correction of Francis? Granted, two of the brave Cardinals, Cafarra and Meisner have died, but that was no excuse not to follow thru. Burke reminds me of someone who is all mouth, but when confronted by their boss(Francis), their spine turns to Jell-O.
Still, I do see Burke in a lot of Catholic blogs and news sites these days...meeting Italian politicians, celebrating ordinations etc. in the TLM, wearing beautiful vestments. It's almost as if he is being presented as an alternate Pope.
I'm not saying he will be elected, but I would laugh my head off, and throw a party for a week at my house here near Philly or up at my other place in NYC if Burke...OR SOMEONE OF SIMILAR LITURGICAL AND THEOLOGICAL SENSIBILITIES was elected. Cardinal Sarah for one, Archbishop Schneider....and I'll bet there's a few more we never heard of....even some created by Francis.
Damian Malliapalli

Well if they support him, they're part of the problem as well.

Interesting that he says the SSPX is in schism.

How do you figure? You mean they should support what you do.

Didn't Benedict XVI lift and excommunication from the SSPX, so from then on they can't be considered in schism?
I think it's only the die-hard rad "save Vatican II" at all cost liberals who will still claim this. And they will act against the SSPX and traditional Catholics accordingly, confident that there will be no directive to the contrary from the Vatican of Pope Francis.

On the last Sunday in April we attended Mass at the Institute in Bordeaux. A holy and reverent TLM was offered. The pews were packed. Over a dozen very talented lay people sang the introit,motets and propers. The choir was composed of young couples,whose well behaved small children also served as ushers quietly distributing missalettes to the congregation. It was a joy to behold. France and America are leading the Catholic traditional movement.

What a mess. Burke at least offers some sanity to the confusion. That doesn't mean that he has all the answers. St. Francis of Assisi predicted "the great destroyer" who must be resisted. It appears that he is here with little resistance.

Burke, along with his fellow pampered, over-entitled dullards, is part of the problem that is systemically rooted in clericalism. If Burke had any nous and/or gonads, he'd be trying to move these people back into the Catholic Church rather than confirming them in 'loyal Catholic, true Church, misunderstood, persecuted, minority' self-justification.

They don't need to be moved back into the Catholic Church. Even Paul Vi, John Paul II, and the great (compared to the other two), Benedict XVI decreed them as such. They never said that the SSPX en masse were outside the Church. JPII excommunicated Lefebre and the 4 bishops he consecrated...no one else. Excommunicated not for holding to tradition, but for disobedience in going ahead with the consecrations.
They are Catholic. 100% Catholic. Much more so than most priests I ever came across. The only people who still say they are not are radical liberal progressivist Cardinals, bishops, priests etc.who are going by their extreme dislike or hatred for the SSPX and what it stands for, rather than reading the official decrees from Pope Benedict XVI about 10 years ago.
Damian Malliapalli

This response presupposes you yourself aren’t a dullard, Pedro.

Burke or 'Gay Ray' is a self-centered, frilly laced powder puff. Add that to the colossal incompetence that cost him his job at the Signatura and his disingenuous, mediocre performance as chaplain to Maltese Falcons and you get an ecclesiastical dud.

It really creeps me out (and I hope I'm wrong), but Peter W writes a lot like Boris C. and Clement.
Sorry to say this, but I can't imaging a guy sitting in his house or apartment, or wherever, and posting multiple times on this site using three different names, but the same type writing style for all three. It REALLY would be sick, if someone tracked his post, and found out that all three supposed names came from the same place. AAAAAAAAHHHH!!! : (
Damian Malliapalli

Damian, seemingly it's the same heretic and judaeophile under many nicknames. I bet he is (was?) a NO priest.
Rab

I always ask you ecclesiastical pilot fish just what Burke does that’s incompetent, and it’s always the same infantile sneering. It’s not just childish, but demonic and pathological.

sorry Donnacha , while I oppose the novus ordo too, the bishop ordination rite is the same formula used by the Coptic Orthodox to ordain their bishops (and used by Coptic Catholics for centuries), so it must be valid. Though of course the Coptic rite has some pretty beautiful language before and after the formula that the new order lacks