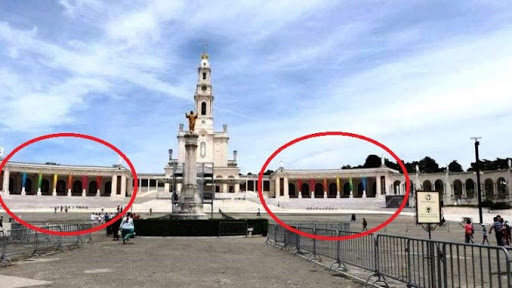 (Fatima) The month of June is claimed by the homo-movement as "la "month of Gay  pride". Montserrat Sanmartí Fernández reported on the Spanish blog Como Cara de Almendro last Tuesday: "New profanation in Fatima. Homo flag on the pillars of the sanctuary. "
To this end the blog published a photo of the old pilgrimage church with the surrounding  pillars. It can be seen that, on each side of the church, six-color cloths were placed on each of the  pillars on the porch, which are strikingly similar in the general view to the Aberrosexual flag.
In the Catholic Church, the rainbow flag is common and a much older symbol than the homo-flag, which has only been recognized since 1989.. The rainbow is the symbol of the Old Covenant between God and man and is used in the Christian context as a symbol of peace.
The Christian symbol and the homo-flag are almost identical and can not be distinguished by the untrained eye. In the meantime, the "rainbow flag", as the pride flag as it is also called in English speaking lands, was largely adopted by Gay Pride Movement. That it is also a Christian peace symbol will no longer be known to many.
The difference between both flags is the number of colors. The Christian flag has seven colors, the homo flag only six. In Fatima, only six colors are shown, but the colors and the color arrangement do not match the homo-flag.
The accusation that the homo flag is being shown in the place of pilgrimage is therefore not true, but shows how sensitive believers have become through the penetrant propaganda of homo-organizations - and, unfortunately, also what trust believers today have for Church leaders.
The colorful flags, as the directorate of the place of pilgrimage communicated, were installed because of the imminent pilgrimage to Fatima, which will take place on the 10th of June.
Text: Giuseppe Nardi

When priests prayed and read the breviary, morality in the Church was at its highest point. Today, I would say that at least 50% of the bishops are practicing homosexuals. Sexuality is a powerful urge and that is what is driving the Church today.

What then are we to assume the rainbow flags are to represent since there are only six colors?

There is no doubt as to the intended message, rendered covertly always, as is the practice of the demonic. FILTH.

Randy Engel doesn´t get so much publicity although she deserves an award
for her “Open Letter to Pope Francis on the necessity of establishing a Papal Commission of Inquiry into Homosexuality, Pederasty, and the “Gay Lobby” in the Catholic Church.”

Since you all incessantly talk about the consecration of Russia I have a question.
If the "Church" headed by Francis is in such a state of heresy/apostasy,do you think it would be wise to ask one of these "conciliar popes" to anything other than go away to a monastery & convert?

Peter W, evidence is the continued tolerance of perversion in most diocese. Plus, Casa Santa Marta is filled with perverts; perverts like Cupich, Fr. James Martin, countless bishops, are all Bergoglio promotes. Given that fact, it's likely Bergoglio enjoys that lifestyle, himself.

Peter W, evidence is the continued tolerance of perversion in most diocese. Plus, Casa Santa Marta is filled with perverts; perverts like Cupich, Fr. James Martin, countless bishops, are all Bergoglio promotes. Given that fact, it's likely Bergoglio enjoys that lifestyle, himself.