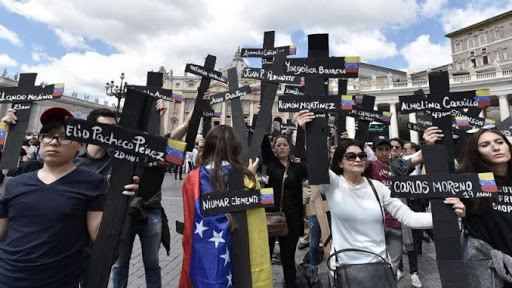 (Caracas) In the late afternoon of May 7, the Venezuelan Episcopal Conference published a letter from Pope Francis about the situation in Venezuela. The letter is addressed to the bishops. The letter, dated 5 May, expresses the papal "concern for the difficult situation" in which the Venezuelan people live.
On the Saint Peter's Square yesterday, Venezuelan Faithful  with black crosses drew attention to the oppression in Venezuela at the Regina Coeli. The names of the dead were written with white  on the black crosses, who have been shot or killed in the latest protests against the socialist regime of Nicolas Maduro. 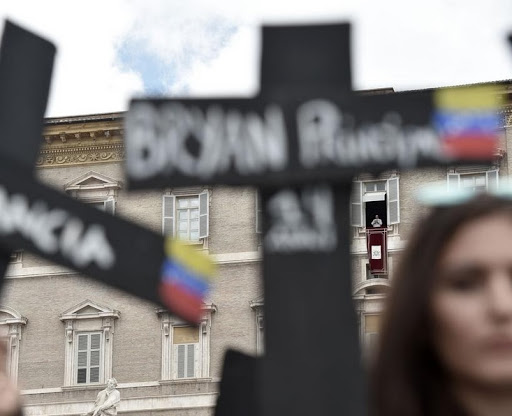 The dead of Venezuela as a reminder to Pope Francis
The silent protest should not only draw the attention of the world to the situation in the Latin country, which has been under the "Bolivarian Revolution" for 19 years. The protest with the black crosses was also an answer to Pope Francis'  letter to the bishops. It was an invitation to join the Venezuelan people and give up his support for the PSUV regime.
To this end, the Pope was not ready in his letter to the bishops. In this he repeated his call to seek "dialogue" with the regime and to come to "agreements" with it.
The Venezuelan prime minister, Cardinal Jorge Urosa, and the faithful protested against the oppression of the Socialist regime on Sunday in Rome with the cross in their hands. The Pope simply ignores the fact that the regime, which calls itself "revolutionary," uses "dialogue" to "suppress the people" and gain time to introduce even harsher oppressive measures to maintain power." This criticism also touches Pope Francis, who is accused of supporting the regime and of wanting to split the opposition.
Don José Palmara, one of the most famous priests of Venezuela, accused the Pope of "the complete ignorance of the situation in Venezuela".
Text: Giuseppe Nardi

Francis is anything but "ignorant of the situation". He is a world socialist and the one prophesied in the "Third Secret of Fatima" and in the writings of St. Francis of Assisi. Can there be any doubt any longer that the Vatican has made a deal with radical socialism to overthrow capitalism. It's a great thought. However, you have to wonder with Margaret Thatcher. Once you run out of using other people's money, where do you get the money? Capital is defined as "goods and services". It is not defined as Kumbaya.

This reminds me about Card. Mindszenty of Hungary and our first leftist Pope Paul VI who enjoyed befriending the soviets, the Vietcong, Castro, Mao, Polpot and all the communists throughout the world.
In that regard, Francis is still living 60 years in the past.

The authoritative teaching of the Church's Magisterium remains: One cannot be both a socialist and a Catholic. But don't tell that to Francis and the leftist Kumbaya crowd: for them---being the true schismatics today---the "Church" began in 1965 with the closing of their oracular council. Nothing else matters: Bible and Tradition and bi-millenial custom count for less than nothing. True barbarians in power now.

Don't be surprised if there's more demonstrations against Francis during his Regina Caeli on Sundays, more anti-Francis posters in Rome, and world wide against him.
Faithful Catholics should have had enough of him and his thugs by now to agitate and protest until he and his gang are gone. Exile is a good idea. Francis can go live in Venezuela or Cuba....the rest, who cares.
Damian Malliapalli

Anonymous said...
Off topic alittle, but you all have to look at this:
http://www.jta.org/2017/05/08/news-opinion/world/pope-and-delegation-of-hasidic-jews-meet-dance-at-vatican
Francis dancing in the Vatican to Hasicid Jewish music. He's debased the Papacy completely. Not by his association with these Jewish people, who are good and upright, but by his traveling to Egypt to connect with the Imam of the Al Alzaar Muslim university, etc. etc.
Next we'll see him chanting Buddhist mantras, or leading the Muslim call to prayer form his apartment window overlooking St. Peter's Square.
Damian Malliapalli

There we have again, even from traditional Catholics, "fear of the Jews" that the New Testament speaks of. How do we know that the visiting Hassidic Jews are "good and upright"? Their vicious "Talmud" which blasphemes Christ and their burning of New Testaments in Israel do not point to either goodness or uprightness, if we are to speak generally (which we probably should not in either praise or denunciation). Will we ever learn who the ultimate, earthly enemy is? No, Catholics are very slow learners, unfortunately.

So someone claims Pope Francis supports the socialist regime and is silent about the victims, so that makes it true? Nope. It doesn't. Here's what the pope said.

"I make a heartfelt appeal to the government and all components of Venezuelan society to avoid any more forms of violence, to respect human rights and to seek a negotiated solution" he said.

"The grave humanitarian, social, political and economic crisis that is exhausting the population", the Pope said we are continuing to receive dramatic news of people being killed, injured, and detained.

He said he is “united in sorrow with the families of the victims” and said he is praying for “peace, reconciliation and democracy for that beloved nation.

He's said it himself. Did you bother to read the article?

No surprise, the freemason communist anti-pope, supporting his murderous friends.

They are basically good people. They think they are the chosen, and that is a good attitude. But, unlike the Muslims...who also think they are the chosen and have resorted to terrorism and violence since their beginning to bring home to everyone else their point...the Jews have never slaughtered people for religious reasons, etc. Muslims have. Sad to say so have Christians (including Catholics). I think only Buddhists and Jews have not massacred people in the name of religion. Hindus massacre Muslims in India and vice versa.
But there is nothing wrong in believing you are chosen, and everyone else is not. Just as long as it does not decline into violence. Hasidic Jews are a peaceful example of a people who believe in their own righteousness and favor with God (even if it's not true). We Catholics used to believe that we had the True Faith. Now, it only exists in traditional Catholic Orders,parishes, and even countries (Poland for example....where millions still believe Catholicism is the one true Faith)
As regards the Talmud, it might be filled with anti-Christian/Catholic passages, but I am sure it does not instruct its faithful to go out and slaughter them in the name of God....as the Koran does.
Damian Malliapalli

Look up "education day" & its impending laws.
Be prepared to be shocked.
(It shocked me)

That the Koran is a murderous book does not have the slightest relationship to the blasphemies of the Jewish Talmud, where Christ the Lord is said to burn forever in boiling excrement and the Blessed Lady's purity is savaged. These are crimes worse, in well-ordered rather than liberal societies, than killing people (unjustifiable though that may be except in capital cases where the Church has always taught the death penalty is a legitimate form of societal self-defense) as blasphemy is a crime against God's divine majesty from His creatures, who owe Him everything. Moreover, there are many forms of violence, some not physical and some indirect, like usury and the Bolshevik Revolution and other anti-Christian revolutions aimed at the destruction of Christendom, in which the Jews have historically richly participated. Talmudic Judaism calls you and me and the whole Catholic Tradition and Scriptures liars. The fact that Muslims are part of a crazed blood cult does not mean we do not have other enemies. To think so is a classic non sequitur. And, yes, there is something enormously wrong with believing yourself the Chosen People (and annoyingly always acting as if you were even in the daily transactions of life) when in fact that election was lost at the rejection of the Son of God. To reduce everything to the litmus test of violence (massacres) is a purely naturalistic, uncatholic way of viewing things. The Christian tradition has never---until recently with the Kumbaya crowd---been pacifist: at times it becomes a moral imperative to fight justly and within the proportionality of morality. And, by the way, ALL true Catholics still believe that the Catholic Church is the One, True Faith; those who do not are not Catholics, no matter what their numbers or positions may be. Even the more recent Catholic Catechism (based on Vatican II) teaches, however tepidly, that the Catholic Faith is necessary for salvation. The great Catholic popes and saints have never white-washed the danger of anti-Christian Judaism or the need for the conversion of the Jewish People, God's initial Elect. Both the awareness of danger and the solicitude for their souls's eternal destiny are the marks of true charity---not the fake charity of the Modernists so grotesquely masqueraded by Francis I.

And what a fabulously disinterested source you cite, Tancred, and guess who claims 'he' himself said it? Mr Objectivity, Guiseppe Nardi!

The true Jewish ppl and religion were dispersed the Day Jesus Christ rose from the dead.
The modern "Jewish" religion is a fraud.
Secondly the "Education Day" Laws call for non-noahide's to be murdered.
Look it up don't take my word for it Friend.

The italian television didn't show the Venezuelan Faithful, only the BoR and some other priests around him.....Maduro is a damn' commie like the guy in white.

What about that special invite to Maduro to visit the Vatican for a "one-on-one"? There are spectacular pictures of the pontiff and Maduro talking in blissful acceptance of one another. The only problem is that Maduro faked his fawning while Francis did not.

In case you missed it, the Third Secret of Fatima, even the released version, talks of a "bishop in white".

"...we got the impression that he was the Holy Father."

aaaand that would be Benedict; NOT bergoglio.

Pius XII found out that Montini was running with the Communist hordes. He then exiled him to Milan from the Vatican. Unfortunately, he was able to recover and resurface.

@susan: All that we know is that a "bishop in white" will be murdered if certain conditions are not met. The Secret does not name which pope that it is. It may be Benedict and it may be Bergoglio or it may be someone still to come.