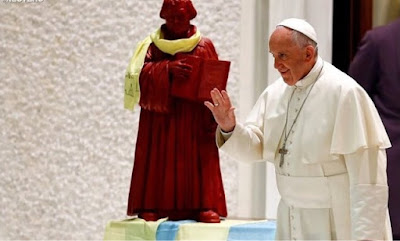 Martin Luther arrived at the Vatican. Visit Luther's statue in the form of a statue by Pope Francesco

(Rome) The Luthermania has dominated the geographical axis of Berlin-Munich-Rome for several months. Yesterday, Pope Francis was even visited by Martin Luther in the Vatican, at least by a statue of the "reformer".  Such a form of representation is otherwise only given to saints in the Vatican. A distant premonition of what is coming?

Yesterday, Pope Francis received the participants of an ecumenical pilgrimage in collaboration with some German bishops "With Luther to the Pope".

Francis said to them,

"What unites us is much more than what separates us!"

"At the end of this month I will, according to God, go to Lund in Sweden, and together with the Lutheran World Federation, we will commemorate the beginning of Luther's reformation five hundred years ago. At the same time, we will thank the Lord for fifty years of official dialogue between Lutherans and Catholics. An essential part of these commemorations will be to look at the future, with regard to a common testimony to today's world, which is so hungry for God and his mercy. "

"Dear young friends, I encourage you to be witnesses of mercy. As theologians advance the dialogue in the field of doctrine, may you continue to seek  opportunities to meet, to get to know you better, to pray together, and to offer your help to each other or to persevere for those who are in distress. If you are free from any prejudice and rely entirely on the gospel of Jesus Christ, who proclaims peace and reconciliation, you will become genuine protagonists of a new stage on this path which ultimately leads to full communion, with God's help."

More remarkable than the words of the papal greeting was a photograph published by Vatican Radio, together with the report on the pilgrimage "With Luther to Rome". It shows a red Luther statue with the pope. The image was spread by the Reuters Press Agency And gives the visual impression that the Pope would bless Luther.

Email ThisBlogThis!Share to TwitterShare to FacebookShare to Pinterest
Labels: Bergogliades

I have a question. If Pope Francis died between now and the consistory, would the bishops named cardinals still be cardinals and eligible to vote in a conclave?

In the year 1916 the "Angel of Peace" visited the three seers of Fatima three times. The children had no need for calendars so that we don't know the exact dates. One was in the Spring, then summer, then fall-September or October. I'm betting on October, the 13th in keeping with the BVM's schedule for 1917. The centennial of the last visit of St. Michael(?) was the very day that the Pope chose to commemorate the Great Heretic, Martin Luther. Better to celebrate one Lutheran even at the expense of an Archangel

Couldn't have a worse enemy.

And to answer one of the earlier posters..if Francis the Heretic dies between now and the consistory date...would his picks for Cardinals be Cardinals? The answer is no. They would have to be installed, and with Francis dead, that would ruin their chances.
Let's hope!
Damian Malliapalli
Damian

When will Jorge give Lucifer his due?

He was the highest Archangel after all. What Lucifer/Satan wanted was to be called God, like Jorge seems to want having supplanted the teaching of Jesus Christ regarding adultery, as if Jorge were His equal! Satan deserves a place in the Vatican near his faithful servant, Jorge


When will the evil man be deposed? How much damage to the faith and loss of souls will it take?

I am certain the answer is maybe.

They'll have to think of a new compliment.

The Spirit of Christ has not refrained from using elements of sanctification found in Traditional Catholicism, as the Council famously taught.

It is sad to read of so much anger and I would suggest most of the bloggers here need therapy. Go and pray more.

LUTHERANS ARE ON THE WAY TO HELL ACCORDING TO VATICAN COUNCIL II
http://eucharistandmission.blogspot.it/2016/10/lutherans-are-on-way-to-hell-according.html

This satanic display of a red statue of a heretic
(red because the heretic is burning in hell)
covered by a yellow scarf
(yellow and white being the colors of the sancta sede,
the land of milk and honey)
is a warning as to what will be coming on October 31
from the false prophet of the apocalypse,
as he continues to lead the mystical body of christ
to its crucifixion.

I do think, that here and there,a tiny number of courageous bishops and are defying the heretic Francis and upholding the Catholic Faith. The whole nation of Poland and most of its bishops are a good example. The Archdiocese of Florence in Italy just came out strongly against Francis' agenda and said there will be no communion for the divorced/remarried etc. Other dioceses have done the same.
This evil man is slowly creating a schism in the Catholic world, between the small remnant of Faithful Catholics, and the mass of naïve people who are still willing to cheer their "Holy Father" and his agenda. No one could deserve that title less than Bergoglio.
Let us all pray that the SSPX does not fall into the trap of accepting anything from Bergoglio and his brood of vipers in the Vatican.
Damian Malliapalli

Pope Francis has offended Luther. Does Bergoglio know that Luther condemned the use of statues as acts of idolatry? And yet Bergoglio has a statue of Luther the heretic, in the Vatican. Bergolio's Papacy (not that I believe him to be a Pope) has become for me a sit-com. Can't wait for his comedy skit on October 31, 2016.

El Codo is the one who needs more prayers than most, it would seem, as the rape of Holy Mother Church does not seem to bother him very much. St. Thomas Aquinas tells us that to fail to be angry when that anger is justified is a sin. The destruction of Catholicism should make us all very angry---but not El Codo, who goes for the usual liberal pap about "therapy," when in fact the ones who need the true therapy of tradition and orthodoxy (and not that dished out by frauds and manipulators with degrees in psychology) are the likes of El Codo.

You are right, Damian, Bergoglio is very misnamed: he is neither "father" nor "holy." A true impostor.

Tongue in cheek--the song us fitting:

I am not sure about the Archdiocese of Florence. Their document is critical of Amoris Laetitia but in the final part 5 it is at the very least very unclear about communion for the divorced and remarried.

The Leaders of the Church failed to act regarding the outcome of Vatican 2.
They have , since then, consistently refused to stand against heresy and blasphemy emanating from the highest level within the Church. Even the sight of the Bishop of Rome enswathed with a blue and yellow scarf paying tribute to a ghastly, garden gnome-like statue of the heretic luther and praying with so called bishops of both genders, has failed to spur our misnamed leaders into action. The flock has been scattered - the wolves will feast on them in Lund! Woe - triple woe - to the spineless cowards who prize the adulation and material security of this transient world above the Eternal Bliss so dearly bought for us by the Precious Blood od JESUS! Kyrie eleison !