Exclusive and Violent: Monotheism in the Crossfire of Osservatore Romano? 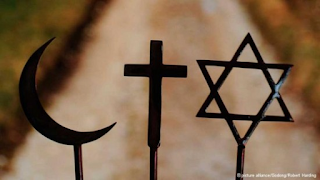 (Rome) In order to gain greater attention for the monthly women's supplement of the Osservatore Romano, "no less than Cardinal Secretary of State Pietro Parolin was employed," said the Vatican expert Sandro Magister. The question is, how is the Vatican's daily newspaper to go ahead? It is unclear who has the say at the Pope's daily newspaper. The result is reflected in articles, which are the expression of a generally broadening confusion.

What future for the Osservatore Romano ?

On May 3, the chief editor of the semi-official Vatican newspaper, Giovanni Maria Vian, and the coordinator of the women's supplement, Donne Chiesa Modo (Women Church World), Lucetta Scaraffia, entered  into the Film Library at Palazzo San Carlo, directly adjacent to the guest house Santa Marta, next to the cardinal."
Also present was the prefect of the newly established Communications Secretariat , Msgr. Dario Edoardo Viganò. Although he was the most senior representative responsible for the media, "he stood strangely, wordlessly at the end of the hall in the middle of the audience."
A month ago, Msgr. Viganò had given an interview to the Swiss Vaticanist Giuseppe Rusconi (Rossoporpora). In this he was very cautious about the future of the Osservatore Romano. He pointed to strong economizing. The emphasis should be shifted to the Internet. The printout should be all set in several languages ​​and the Italian edition is to be reduced to a handout for the Roman Congregations. The free sale of the paper should only be from newsagents around the Vatican.
"For us it is a bit like an official journal", Viganò had outlined the role he assigns to the Osservatore Romano. Background reports and intellectual contributions of different disciplines should appear weekly, as it is currently the case, for example, for the German edition of the Osservatore Romano. "He said not a word he said about the women's supplement, which allegedly for Viganò, would be subject to  cuts, considering its cost, rather than being promoted," said Magister.

The "Pastiche" of the Women's Supplement in the Osservatore Romano

Cardinal Secretary of State Parolin was asked at Palazzo San Carlo as to the cost of women's supplement. There is a patron, the Cardinal said, and it was the Italian Post.
The decision on the future of the supplement seems, therefore, not to have been taken. The result of the current situation is that "one does not understand in this uncertain period of transition, who in the media department of the Vatican calls the shots, yet watches over what is published," said Magister.
The women's supplement is especially the best example of the current "pastiche". The March issue emphatically called for The Right of Women to Give Sermons, although the ecclesiastical discipline and tradition  neither know nor sanction such things. The women's supplement held forth on this subject despite Pope Francis' ruling out this issue at the beginning of his pontificate.
"One of the culprits is the Prior of Bose, Enzo Bianchi, who was then made ​​to take a step back in Osservatore Romanopublic," said Magister.

An even clearer example of the "current state of confusion," said Magister, is an article of April 26, published in the Osservatore Romano." Il disagio dei monoteismi " (The Discomfort of Monotheisms) was its title, referring to the famous German Egyptologist and religious theorist, Jan Assmann.
"Already the author raises some questions," said the Vatican expert. This is Marco Vannini, a mysticism expert whose positions "are miles away from the Catholic faith."
The Roman Jesuit journal Civilta Cattolica has already issued a damning indictment in 2004 from the pen of Father Giandomenico Mucci SJ of Vannini. Vannini, who "excludes the transcendence, suppresses the fundamental truths of Christianity and ends inevitably along the Neoplatonic way  in a modern Gnosis".
Nevertheless, Vannini has appeared increasingly since 2014  as an author in Osservatore Romano.  Of all things, the article on Assmann was entrusted to him, a religious theorist, who thinks the monotheistic religions, especially Judaism and Christianity, in contrast to other creeds, were exclusive and violent, while the polytheistic religions of antiquity, by definition, were peaceful.

Scalfari's religious relativism in the pages of L'Osservatore Romano

Vannini  does not even distance himself from Assmann in his article the distance to Assmann, but went rather on a thesis of his own.

"At a time of renewed violence in the name of God, a true religious tolerance that is able to recognize relativity without slipping into banality, exists only by overcoming the Mosaic distinction between true and false religion."

This is contrasted with the alleged religious understanding Gandhi "the truth in us, purifies us constantly."
And further:

"In our globalized world, religion can only be a 'religio duplex ', as the religion can accommodate on two levels what has been learned as one understanding among many, and to be seen with the eyes of others, without, however, losing the hidden God from sight, the common, 'transcendental point' of all religions."

In other words, says Magister, Vannini again presents those ideas that Eugenio Scalfari attributes to Pope Francis  with the relationship between religions. Scalfari interpreted the pontiff in his own way. However, this interpretation was never really denied by the Vatican. Now it is the Osservatore Romano which creates a space for the same idea of coming from Masonic home of the atheist Scalfari.
Text: Giuseppe Nardi
Image: Asianews / Youtube (Screenshot)
Trans: Tancred vekron99@hotmail.com
Link to Katholisches...
AMDG
Posted by Tancred at 9:04 PM

I hate that word subsist---it's so nebulous.

Assmann should've been a proctologist instead of a religious theorist.

The cat is out of the bag! We are witnessing the Vatican's first steps in the creation of a one-world-religion.

For the sake of Gaybriel's mental health, and my own valuable time, I'll just be moderating the blog replies and including only thoughtful, respectful replies.

Card. Parolin said that even a woman could be a Secretary of state for the Vatican.....abyssus abyssum invocat.

This Vatican newspaper, once highly respected up until the days of John Paul II, had under Francis become just like that other USA paper Fr. Zulsdorf calls the "fishwrap"...the radical liberal National Catholic Reporter. That publication belongs in the trash. Sadly, thanks to Pope Francis et al, so does L'Osservatore Romano.
Damian Malliapalli

Well. both the Lutheran and the atheistic views are certainly given heed to. What about the Truth?

They tried for 800 years to take Catholicism away from my country Ireland. By such methods as extreme violence, eviction of families on the side of the road, they suppressed education, we were even beaten for speaking our own language. Things got so bad that an Irish man Dare not lift his head and maintain eye contact with those in power. We kept the faith at our rock masses and hid our priests from the priest hunters often paying with our lives. They did not succeed then they will not succeed now. Hold fast to the truth hold fast to the one true faith. We will not fail. Christ is the Victor.

That's true, but the "elite" who run Ireland have decided to destroy Catholicism by importing muslims. I was shocked on a recent visit to Dublin.

Ah yes but it must have seemed like that to visitors back in the penal times too........no one will be taking Catholicism from Ireland.....St Patrick promised that and I believe him. Look up his prophecy regarding the various states of Ireland throughout history and into the future and also the promise that the anti Christ will never get his hands on Ireland. It makes interesting reading during these trying times.


"The Angel answered and told him to look to the north of the land, and that there he should see the Hand of the Most High. The Saint lifted up his eyes, and, behold, a little light arose in Uladh (Ulster), which had struggled long in the darkness, until at length the whole island was filled with the brightness of its glory, and Ireland returned to its first state of all-pervading fire." ​