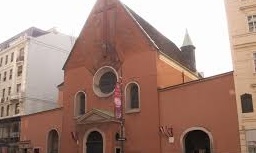 (Vienna) The Vienna branch, which was founded in 1988 FSSP, will  lose after 18 years, the famous Capuchin Church as a permanent Mass site.
"After about eighteen years in which we were allowed to be hosted by  the Capuchins, we have to give up the cherished Capuchin Church in downtown as a place of worship,"  announced  the local superior, Father Florian Grafl, in his preface to the March newsletter, has  received "a melancholy aftertaste" this year of "joy and jubilation over the high holy Easter."
April 2nd, the white Saturday in the Octave of Easter "will be the last day on which the weekday Mass at 8:00 am will be said in the Capuchin church."

There is No Reason for the Eviction


One reason for the termination of the right of hospitality by the Capuchins was not disclosed.
The "termination"  took place a complete surprise.Nevertheless, it was Father Grafl, who will announce a new Mass location: "On White Sunday, April 3, Holy Mass will be said in the traditional Rite in the Schutzengelkirche (Pauline Church) [Church of the Guardian Angels] at Wiedner Hauptstraße."
The Fraternity of St. Peter was offered by Msgr. Franz Wilfinger, the pastor at the Paulaner Church,  "generously, a new home."
The Guardian Angels Church, also known as Pauline Church, is the parish church of the district of Wieden at Wiedner Hauptstraße Nr. 21 in the fourth district of Vienna. The first mention of the church dates back to 1211. It came to be through a donation in 1353 by the Equestrian Order of the Holy Spirit founded by Louie Anjou. In 1529 the Church was destroyed during the first Turkish siege. Since the members of the Order were scattered, it was dissolved.

"New home" in the Wiedner Parish

In 1626 Emperor Ferdinand II. in the course of the Counter-Reformation, called upon the Pauline Order founded by Francis of Paola 1435, to Vienna. The "Least of Brothers," as the members of the strict mendicant order call themselves, erected the first Paulaner church in 1651, consecrated to the Holy Guardian Angels. During the second Turkish siege of 1683, the church was destroyed again. This time as a precaution by the Vienna City defenders to leave the Turks no secure position for the attack. After the war,  the third and present church was built.
The storming of the monasteries of Emperor Joseph II.  was  in 1784 and the Viennese Paulaner monastery was a victim.The monastery buildings were almost completely raised. The only remainder is the presbytery which is used for that purpose today.

The Fraternity of St. Peter in Vienna does not have its own church and is therefore dependent on hospitality at a parish or religious order,  the church of a rector. A canonical erection as an Old Rite personal parish for the Archdiocese of Vienna has not been  previously discussed. So far there is not one in all of Austria.
The Vienna Capuchin convent currently consists of ten brothers. seven of whom are priests. One of the tasks of the monastery is the custody of the Capuchin Crypt, the place of repose until 1918, of the ruling house of Habsburg.  The last, Otto von Habsburg and his wife Regina von Saxon were buried in the Imperial Crypt in 2011.
The Capuchins describe "necessary renovations" as the reason for the eviction. Finally, the church interior was subjected to a thorough renovation in 1976.
Text: Martha Weinzl
Image: Wikicommons
Trans: Tancred vekron99@hotmail.com
Link to Katholisches...
AMDG
Posted by Tancred at 9:14 AM

Well, thanks at least to Msgr Wilfinger and the Pauline Church for offering the Fraternity a new home.

Ideally, of course, His Eminence would offer the FSSP one of the numerous churches about to close or already closed as a personal parish, straight up - and they have a lot of them. But that's not how Cdl. Schonborn rolls.

dollars to donuts some of the "migrants" needed a "worship space".