Petrus Blomvenna (1466-1536) and the Cologne Charthouse in the Renaisance 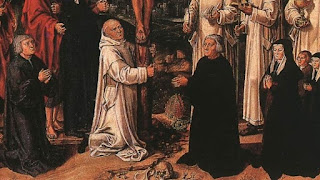 Exactly 550 years ago on the 29th of March, 1466, Pieter Blommeveen (later latinized to Peter Blomevenna) was born as one of twelve children of a wealthy and pious family.
The gifted boy received, like his compatriots: Adriaen Boeyens (1459-1523) and Erasmus of Rotterdam (1466-1537), a dignified education with the Brothers of the Common Life (Devotio Moderna).  Subsequently, he studied from 1483 at the University of Cologne and entered into the famous Cologne Charterhouse St. Barbara in 1489.  St. Barbara was the largest Charterhouse in Germany and one of the most respected of the Carthusian Order.

The Carthusians led a  spiritual and moral regeneration movement within the Church.They placed an emphasis on prayer, asceticism, Christ and Marian devotion.

As part of its evangelizing activity, the Cologne Charterhouse gathered a large theological reference library and early had on their own printing and publishing operation for the production and dissemination of edifying writings.
Blomevenna was marked by great gentleness and innocence, by strict asceticism and by the gift of prayer and tears. This latter event was the reason why Blomevenna was prohibited from publicly  saying Holy Mass. His great emotion would, so said his superiors, confuse the faithful.
At 43 years he was elected prior of the Cologne Charterhouse in 1507.

Not least important was the printing and distribution of numerous writings of Flemish Carthusian Denis van Leeuwen, called van Rijkel, better known by his religious name Denis the Carthusian (1424-1471).
This  greatest  Dutch theologian of the Late Middle Ages was considered very mystical. Because of his visionary writings, he was, in contrast to the sacred high scholastic Thomas Aquinas (the Angelic Doctor ),  called Doctor ecstaticus. He impressed  the  devout believers and the clergy tremendously by his devout life.The internal Church reform movement of Devotio Moderna got here a theological foundation with an emphasis on prayer, the renunciation of the world and was embedded in the Mysticism of the Cross and Marian devotion.

Blomevenna as editor of the writings of Dionysius the Carthusian

Denis the Carthusian was then several years a companion of Cardinal Nicholas of Cusa and strove already mid-15th century to an inner purification and spirituality of the Church in the midst of a turbulent world.
In 1509 Blomevenna translated the "Spieghel der Volcomenheit " (Mirror of Perfection) of Brabant Franciscan Hendrik Herp (ca. 1410-1477), another protagonist of spiritual renewal movement in the Netherlands, into Latin. More mystical-contemplative works followed.
The Carthusians were bound to the vow of silence. On the other hand, their use for pastoral care in Cologne was extremely necessary in the then chaotic times and was specifically requested, led Blomevenna to build a chapel on the outer wall of the Charterhouse, which made the pastoral care of women religious possible.
He led an intensive  correspondence with Dutch and Low German Beguines and nuns. He also had close links with Pope Clement VII. And Charles V.

The Cologne Charterhouse as a bulwark of catholicity

Under Blomevenna's Priorate many young men joined the Charterhouse.
Noteworthy are the brothers John and Dieter (Dirk) Loher (Loherius de Stratis). It was the latter who later became the savior of the Charterhouse Buxheim bei Memmingen (Swabia) which would lead the German Carthusian through the turmoil of the 1540s.

Even more important was the contact of the then still very young from Geldern, Pieter Kanis, actually Peter de Hondt, - who as Peter Canisius, was the first and the most important of the German and Dutch Jesuits - with the Cologne Charterhouse. The first Jesuits on German soil were largely supported by the Cologne Charterhouse financially and organizationally.
While the Reformation spread in Germany and in North-West Europe from 1517,  the Cologne Charterhouse constituted under Blomevenna the largest and most important bastion of Catholicism.
It was extremely proficient in theological defense of the faith and in its reply to allegations and accusations.
They trained their members and sympathizers, used modern printing techniques, gave out religious and polemical writings and operated a highly efficient network with important and interesting people.
Eighteen months after his death, his main work was published posthumously by his successor, Gerhard Kalckbrenner,  "De divina bonitate"  (Of Divine Goodness): an extremely important source for the Lower Rhine Dutch theology at this time.
The contacts with the Dutch Beguines and female religious were intensified. They led to the arrival of highly respected Dutch mystic, Maria van Oysterwijck with her mystically oriented circle.

Authentic model in prayer, asceticism and dedication to faith

Blomevenna today is almost completely forgotten today in his home. He is and remains, nonetheless, historically and above all for catholicity, an extremely important personality.
At the beginning of the modern era, in the troubled times immediately before and during the early Reformation period, he created, through great theological knowledge, through enormous pastoral activity, through efficient and skillful use of modern techniques, through education and networking of important and spiritually upright persons, and above all, by his personal example of the authenticity of prayer, asceticism and commitment to faith, the necessary staff work for the beginnings of the counter-Reformation.

It has been referred to in the 20th century as the Counter-Reformation or as a "second Reformation" - to relativize the  "contra".
However, this is not quite true. There was a very long time, since the early 15th century, of aspirations for a Catholic renewal within the Church.
These reform movements were not least guided and supported as the saying goes, the Carthusians:"Numquam reformata qualis numquam deformata" (never reformed, because never deformed).
The Carthusian Order was then the most important center of Catholic piety. It stood  bravely and loyally for the venerable faith, was averse to the temptations of the world  and consolidated stably in itself; and it defended the faith very capably and efficiently in the Reformation turmoil.
The Carthusian Petrus Blomevenna here was the most important chief of staff. Blomevenna, who was prior of the Cologne Charterhouse and Visitor of the Rhenish Carthusian Province until his death, died on the 30th of September, 1536 in Cologne.
Of Blomevenna there are two traditional contemporary portraits:
In Wallraf-Richartz Museum in Cologne is the epitaph by Anton Woensam  "Christ on the Cross with Saints of the Carthusian Order and its founder Peter Blomevenna" (Inv No: WRM0208 / Access 1857).
Moreover Blomevenna is depicted on a magnificent stained glass window that he himself donated; Today it is located in the Worcester Art Museum in Massachusetts (USA).

Interesting, but something needs explanation. How couple the Carthusians have been involved education if in fact they are strictly contemplative and cloistered order?

That should read "could."

A lot of it had to do with the necessity caused by the upheavals of the Protestant Revolt.