Priestly Celibacy "in the Example of Christ" -- Cardinal Secretary: "One can talk about it, but without haste" 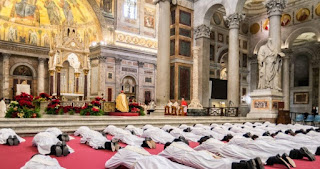 (Rome) at the Pontifical Gregorian University  a star-studded conference on priestly celibacy was held in the past week. Celibacy was talked about from the 4th-6th February  as a constitutive element of the priesthood and defend to this. The planning for the conference began in the last period of the pontificate of Benedict XVI. It was carried out now at a time, since there is   grumbling around Pope Francis and a number of his collaborators, claiming he was thinking abandoning  priestly celibacy, which only the Latin Church had realized and preserved in the two thousand year history of Christianity. Therefore,  the opening address by Cardinal Marc Ouellet, prefect of the Congregation for Bishops and the closing speech by Cardinal Secretary of State Pietro Parolin were awaited with particular anticipation.

HERE YOU CAN ADVERTISE »
Both defended their remarks on priestly celibacy energetically and brought a wealth of theological arguments. Priestly celibacy has remained in practice, despite the challenges and many difficulties.

Cardinal Ouellet founded his remarks in the New Testament and the example of Jesus Christ, from which priestly celibacy is deduced. He confirmed, however, that the issue is conceived as "controversial" after 2000 years.

"The Church tradition of celibacy and abstinence of the cleric did not arise just at the beginning of the 4th century as something new, but rather, was - both in the East and the West - the confirmation of a tradition that goes back to the apostles. As the Council of Elvira in Spain 306  confirmed  that the priests have the duty to live in perfect continence, it is important to understand that this need in the early years of the Church was for both celibacy and the ban against marriage as well as also the perfect abstinence for those who were already married."

The remarks made by Secretary of State Cardinal Parolin were expected with more expectation. When the then Nuncio was appointed by Pope Francis at the head of the Roman Curia in September 2013, he stressed in an interview the striking fact that priestly celibacy was  "no dogma" and could therefore be "discussed". As the institutionally highest ranking appointee of Pope Francis and personally selected as well, his statements have special weight.

Cardinal Secretary of State Parolin: "You can talk about it, but without haste and constructively"

The Cardinal Secretary of State it was then, that where in the conference the door was closed, he yet  opened the door relatively the widest towards possible exceptions. The door to exceptions had already been opened in the Second Vatican Council. The most visible manifestation of this are since then in the Latin Church, permanent deacons who may be married at the time of the diaconate. These so-called "viri probati"  are considered by some since then as a "precursor" the abolition of celibacy   following the example of the Greek Church.
The Eastern churches have not kept celibacy and allowed wide exemptions. The bishops and monks are celibate, while the diocesan clergy is married. This has the consequence that all bishops come from the monastic life. Whoever is married at the time of consecration, he can remain as a secular priest. After the consecration, marriage or remarriage is excluded also in the Eastern Church. An inner-Church ascent for lowly married  secular clergy is not possible.
Cardinal Parolin said:

Celibacy is a vocation, which is seen in the Latin Church as particularly appropriate for those who are called to the priestly office. The celibate spirituality of the presbyter is a "positive" constructive intent, aiming that the people of God has always defended from the danger of corruption and bourgeoisification of the radical free shepherd.

To acknowledge the level, which this intent brings  with it, but it does not exclusively, as the Second Vatican Council in Presbyterorum ordinis said,  by declaring that it was not " demanded by the nature of the priesthood itself (is), as the practice of the earliest Church and the tradition of the Eastern Churches show where there are also married priests of the highest merit,  along with those who choose the celibate life out of the grace-like appeal together with all the bishops."

The Catholic Church has never forced upon the Eastern Churches the celibate decision. On the other hand, it has allowed exceptions in the course of history as in the case of married Lutheran, Calvinist or Anglican pastors who - received into the Catholic Church - received a dispensation to receive the Sacrament of Orders. This happened already during the pontificate of Pope Pius XII. in 1951
Recently, 2009, the motu proprio Anglicanorum coetibus of Benedict XVI. allowed the establishment of territorial dioceses of the Latin Church allowed where  Catholic priests were consecrated to hold office who were former Anglican pastors.
In the wake of the massive emigration of Catholics from the Middle East, Pope Francis allowed in 2014 with the papal decree, Praecepta de clero uxorato orientali,  married oriental priests to act in the Christian communities of the diaspora and thus outside their historical areas, where previous bans forbid it.
In the current situation then,  a kind of "sacramental emergency" is frequently emphasized by the lack of priests, particularly in some areas. This has given rise to the question of contingency from multiple sides in the question  to consecrate the so-called "viri probati".
If the problem does not appear to be unimportant, it is surely not imperative to make hasty decisions and only due to emergencies. Yet it is also true that with the needs of evangelization, together with the history and the diverse traditions of the Church, the opportunity for legitimate debate leaves open the door, when they are motivated by the proclamation of the Gospel and are led in a constructive manner, while always preserving the beauty and importance of the celibate decision.
Celibacy is a gift that requires it to be accepted with joyful perseverance and maintained, so that it can bring real fruits. To live it profitably it is necessary that every priest all his life long feels as a disciple on the road, which sometimes requires the rediscovery and strengthening of his relationship with the Lord and also "healing".

Key reason for this Church practice: continency for the sake of the Kingdom following the LORD’s own example, and the priest acting “in persona Christi”. Christ’s bride is his Body, the Church makes sense that the unmarried candidates be celibate upon becoming priests and those married be continent upon being ordained as it was in early Church practice and law.

It is more than just discipline.

It has everything to do with the nature of the priesthood and those advocating for married priests are the ones who know very well its importance in the life of the Church.

Further reading: Francis Speaks, Scalfari Transcribes, Brandmüller Shreds |http://chiesa.espresso.repubblica.it/
*
Point even missed by the likes of Fr. Hunwicke. My above comment to his Married priests? [http://liturgicalnotes.blogspot.com/2016/01/married-priests.html] was not published nor my e-mails to him replied.

It's how it always begins, isn't it? We are just exploring, talking, discerning, blah, blah, blah... But the end result is already preconceived and the strong-arm tactics follow later when the general frame of mind has been softened. It is classic liberal strategy. Archimago

If it really has to do with the nature of the priesthood, then how is it even possible that married anglican clergy who convert can be permitted to become married Catholic priests?

Their example proves that it is clearly NOT intrinsic to the nature of the Catholic priesthood that priests be unmarried - at least as John Paul II and Benedict XVI are concerned.

Cf. This answer of mine on Christianity StackExchange: http://christianity.stackexchange.com/questions/46147/what-is-the-rationale-for-forbidding-priests-to-marry-in-traditions-where-alread/46155#46155

Hello!!! i'n not afraid to say my name....because i have commented so many times on...''optional celibacy'' i find this article a big piece of junk!! when are they going to stop this...pagan...,man made....hypocorisy,,,stray jacket....mandatory celibacy???? it's high time!!! i thank the lord for our dear cardinal parolin and our dear pope of hope...francis..for having an open mind and heart on this...important issue!!! mandatory celibacy was brought in by some pope centuries ago...only for ''politics''...shameful!!! and look where are church is at today...it is completely destroyed!! mandatory celibacy..has hidden so many dirty sexual secrets and we have so many perverted priests sexually molesting innocent youths. many perverted men go into the piresthood so they can get their dirty hands on,,innocent youths. and so many priests....normal ones....being human men...have a girfriend on the side...living double lives. for heaven sakes...a priest is a human man...not a ''robot'' which the church expects them to be!!! it's about time our church goes back to its' original teachings from our first christian priests....our dear disciples...whom were...''happily married''...even our dear first pope saint peter!!! no one is saying they are abolishing...celibacy....it will become....''optional celibacy''...so a priest can choose wether to be ''celibate'' or be married''. and let me tell you....it's the ''woman'' that makes the man!!!! a priest will be even a better priest with his wife by his side,,,supporting him!!!!!! so,,,enough talk about bringing in...optional celibacy....now we need to see....ACTION!!! so many of us are anxiously waiting for...''OPTIONAL CELIBACY''!!!!!!!! IT'S HIGH TIME!!! AMEN!!! AND MANY THANKS AND BLESSINGS!!!! p.s. from the begining God has blest the union of man and woman to go forth and multiply!!!!! for centuries...''forbidding priests from marrying,,is denying them of their human rights!!!'' this abuse should be stopped,,,,now!!!!!!!! sincerely,,,maria patalano

P.s.s. i just re read your article above,,it just doesn't make sense!! our secretary of state cardinal parolin stated on the 6th of february...that mandatory pagan celibacy was going to be changed...to....''optional celibacy''...it looks like they have turned over our dear cardinal's words above!!! i'm with so many behind our dear pope of hope francis and our dear secretary of state...cardinal parolin. please do not allow those politician bishops to change your mind on our...''optional celibacy''. yes,,,jesus was celibate....he was a man...but also...GOD!! jesus chose ''married disciples''..and they were our first..''christian priests'',,,,jesus...is our high priest. jesus never demanded...celibacy from his disciples....i hope your eponymous flower...keeps this in mind!!! no more talk about bringing in...''optional celibacy''....we need ACTION!! we need it to become...LAW....TODAY!!!! thanks!!! maria patalano

p.s.s. we the church people need to vote,,and on this internet we get no where!! i suggest we all write to our dear pope francis and cardinal parolin and tell them that our church is in need to go back sooooon,,, TODAY!!!!! to it's ''original roots''....''optional celibacy''!!!! now...we will take,,,ACTION!!!!!

Actually, clerical celibacy is an apostolic tradition. The Church is already back to it's roots. You wish for the Church to embrace protestant innovations popular in the 16th century which, to date, aren't doing very well today if you look at the state of Protestantism in the West today.