Voice of America: "Meeting of Pope Francis and Patriarch Kyril Part of the Message of Fatima" 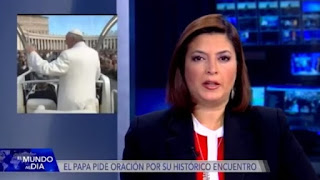 (Rome) The Spanish-language newscast "El Mundo al Dia" Voice of America (VOA) reported on Wednesday yesterday on the of 5 PM (Washington time) broadcast of the general audience of Pope Francis in the late morning. "El Mundo al Dia" reported at time stamp 20'28'' of a prayer request by the Pope for good progress in the first meeting in Cuba with the Moscow Patriarch of the Russian Orthodox Church. Voice of America is the official state foreign broadcast of the US government. It broadcasts daily world news in English and 43 other languages from radio and television stations.

HERE YOU CAN ADVERTISE »
On the the Pope's greeting  to the German pilgrims Voice of America reported:

"A few hours before the start of his historic pilgrimage to Mexico, Pope Francis made reference to a meeting  which after 1,000 years is almost unknown today. With a gesture of reconciliation, the Catholic Church will meet  with the Russian Orthodox Church, separated because of the Eastern schism since 1054 [Actually, Moscow didn't break with Rome till much later as a result of the Fourth Crusade and the sack of Constantinople], between

both their highest representatives in Havana on Cuba under the auspices and through the agency of  President Raul Castro. According to some historians, the approach is part of the conversion process of the Russian people, which began under the pontificate of John Paul II., and is part of the message that was revealed by the Virgin of Fatima when she appeared in the beginning of the 20th century to three shepherd children."

What did the German spokesman say at the general audience on behalf of Pope Francis?

"Dear friends, in the coming days I will visit Mexico. I ask you to accompany my Apostolic Journey and the meeting with Patriarch Kirill in Cuba with your prayers. Thank you so much! I wish you a good start of Lent. "

Voice of America reported that Havana was chosen as a meeting place, because, among other things Cuban President Raul Castro mediated the meeting.[How heartwarming.]

In addition, the official foreign transmitter of the US government provided a link between the meetings and the Message of Fatima on the conversion of the Russian people. At the time when Mary appeared to the shepherd children in Fatima,  Russia was in the midst of the revolution. With the February Revolution, the [legitimate] czarist regime had been overthrown. With the October Revolution, shortly after the apparition, the Bolsheviks violently seized domination and established the totalitarian Soviet Union, which officially existed until 1991. Our Lady had requested the consecration of Russia  to her Immaculate Heart at Fatima, then Russia will be converted, otherwise it would "spread her errors throughout the world, which will give rise to wars and persecutions of the Church. The good will be martyred, the Holy Father will have much to suffer, various nations will be annihilated, but at the end my Immaculate Heart will triumph."  "The Holy Father will consecrate Russia to me which will be converted, and in the world is a time of peace to be given."  From  the so-called Second Secret of Fatima.
It is astonishing that the official foreign transmitter of the US government establishes a link between the meeting of Pope Francis and Patriarch Kirill and the Fatima message of 1917.  It is a relationship which has not been picked up on by any official Catholic media, certainly not the media of the Vatican.


Voice of America was founded in 1940 under the leadership of Nelson Rockefeller as an instrument of propaganda during World War II. Its present name was given to the transmitter in 1942. The Spanish-speaking section of Voice of America is the oldest non-English department that aired programs to counteract Nazi influence on Latin America.

So....this will aid the chances of the pope consecrating Russia to the Immaculate Heart....

Shameful use of Fatima for calculated and wished-for political ends.

Wonder what Dici will say (haha)! Francis has taken over Fellay & the Fatima Center and Obama has taken over VOA--now all marchin' towards one world atheistic communism under the banner of Isis (the anti Mary). Sure Rorate/The Remnant will have nuthin' to say--just like no commenters when you post on the ped scandals.

Wonder if McCarrick, O'Malley, and Cuomo (representing the NY Casino Mafia interests) will be there:

Right wing trad Catholics in France like Putin (and are anti American):

@ Anonymous ass who posted after you. Be silent, devil. Before someone throws holy water on you.

A truly desperate attempt on the part of the U.S. to legitimize its rapprochement with Cuba and the whitewashing of Castro and his ilk.

THE CHURCH IN AGONY

Penance Penance Penance
to avoid Divine vengeance
for not showing any remorse
and trying our will to enforce
The reign of the Impostor has arrived
the Church, of TRUTH is being deprived
the whole world hangs on his lips
while being readied for a total eclipse
The true followers of Christ
trying to pull off the heist
are persecuted for non-compliance
and being countered with defiance
When it will seem that all is lost
everything sacred has been tossed
God will deliver us from our agony
and reign forever in all His Majesty

I agree with you anonymous 4:17pm

I believe you simply should create a Gravatar profile.