Not All the Synod Fathers Understood Final Report They Agreed To? It's Only Available in Italian. 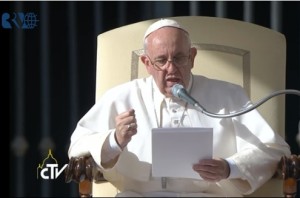 (Rome) During  catechesis held in Italian during today's general audience, Pope Francis also came to speak on the Synod of Bishops. The Catholic Church leader said:
"The Assembly of the Synod, which ended recently, has considered hard  the vocation and mission of the family in the life of the Church and in today's society. It was an event of grace. At the end of the Synod, the Fathers  handed me the text of their conclusions. I wanted that this text will be published so that everyone can participate in the work that saw us collaborate together for two years. This is not the time to examine these conclusions, I have to think about for myself. Meanwhile, life does not remain standing, especially the lives of the families, it does not stand still. "
Thus, the Pope headed over to catechesis.

The  Pope's reference that he had desired that the final report of the Synod, the Relatio finalis, be  published, amazed. Not even in the Italian text of catechesis, published on the official website of the Holy See, is linked to the final report, but only to a general page of the papal speeches to the synod. In the English summary of the catechesis it is also linked to the general page and nowhere in the German summary.
The final report of the Synod adopted on 24 October is to this day only in an Italian version. The closing speech of the Pope on the same day, and the Pope's homily for the closing Mass on 25 October have been published on the same day in different languages.
It would therefore be difficult for the "all" mentioned by the Pope, "to participate in the work." Those responsible, directly under the pope in the General Secretariat of the Synod, shows no interest in translations.

Doubts that all Synod Fathers Understood the Final Report

The fact that the final report of a synod of the world church was presented to the Synod Fathers on 24 October in Italian had only caused some irritation. Although the Italian language is de facto that of the Church as an unofficial lingua franca, it has no official status. It is a popular language among many others. There are doubts whether all the Synod Fathers have sufficient knowledge of Italian to actually capture the final report in all its importance.
Does the Pope not know   that the report is only available in Italian? Who decides the translations? Why are the Synod Fathers not in position to safely understand  the final report, on which they had agreed? Why the faithful and the public  not be able to be able to really read and understand the final report?
Text: Giuseppe Nardi
Image: vatican.va
Trans: Tancred vekron99@hotmail.com
Link to Kathnet....
AMDG
Posted by Tancred at 8:35 AM

obamacare all over again.

Sounds like Nancy Pelosi. We'll find out what is in it after it is passed.

it really is run like a latin american banana republic...