From Saul to Paul of the Traditional Rite 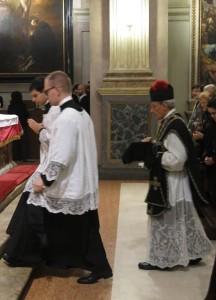 (Milan) The Christian faith always aims to conversion and repentance This is what distinguishes the truth of God from the ideologies of men. This lifetime opportunity and possibility is what distinguishes Christianity. This allows diverse and unexpected ways. Such is reported from the Archdiocese of Milan. ""The infamous Msgr. Luigi Manganini until the end of 2012 was Archpriest at the Cathedral of Milan and master of ceremonies for the Archbishop, a sworn enemy of the traditional rite and as grim and zealous opponent of the Catholic tradition, has celebrated today in the traditional form of the Roman Rite", says the traditional site Chiesa e postconcilio.

For Decades, a Bitter Opponent of the Traditional Rite

For decades Msgr. Manganini was a fierce opponent of tradition and the traditional rite, he "insulted it in every possible way". Among other things, he spoke publicly of "old scrap iron destined for the heap,"  said Messa in Latino.
Canon Manganini was not just any priest, but until his retirement in late 2012, the most prominent liturgist in the Ambrosian Archdiocese.
Notorious is the episode when the already elderly Msgr. Angelo Amodeo as privately celebrating Msgr. Manganini canon of the Cathedral of Milan, was on his way a few months before his death in 2012 in the house of the canons, to say the Holy Mass in the traditional Ambrosian rite, as it had been approved in 1954 by Blessed Archbishop Cardinal Ildefons Schuster. On the way he met Msgr. Manganini. When he saw the maniple and chalice veil, he berated him loudly and hurled against Msgr. Amodeo all the  curses  which one can only imagine. This Holy Mass was known as the "insult Mass" in  Milan Church history.

"The Holy Mass was to be celebrated, as if we were in the Soviet Union" 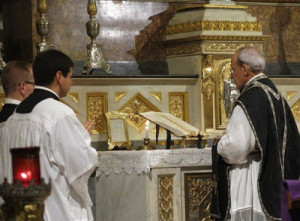 Msgr. Manganini at the celebration of Holy Mass in the traditional rite
Or the episode where in Saregno he forbade the celebration of the traditional Mass at first, then allowed, but only behind "closed doors", on the grounds that such a celebration would trigger "astonishment" among the faithful. Without rehashing all the details: In Saregno a conference on  Blessed Newman took place in 2010 with.Abbé Jean-Pierre Herman, the Secretary of the then Archbishop of Mechelen-Brussels, the just consecrated Msgr. Leonard who wanted to celebrate the Holy Mass in the traditional rite.  Msgr. Manganini forbade it and then allowed the celebration only when Rome intervened. Nevertheless, he tried wherever possible to hinder the celebration. He knew at that very time already that the traditional Mass attracts the faithful. Therefore, the doors of the Church had to be closed. The faithful could only reach  it through the sacristy into the church. They had almost to secretly sneak into the church, as if they did something illegal or  to hide in the Jacobin France of the Revolution or in Communist Russia of the Soviet era. But what happened in Saregno 2010 was not played out in the time of the French Revolution and not in the Soviet Union, but in the Roman Catholic Archdiocese of Milan under Archbishop Dionigi Cardinal Tettamanzi  and had been ordered by Msgr. Manganini.

The Rediscovery of the Traditional Rite

Msgr. Manganini is now retired and it was very quiet around him. A few months ago he accepted the request of a group of faithful in Milan to celebrate the traditional Rite. "The formerly so despised and traditional believers are apparently the only ones still showing  honor to him, while in the higher church circles that he defended so zealously, no one seems to look after him," said Chiesa e postconcilio.
"What would those now say of Msgr. Manganini who was once an idol? Will they also go the way to Damascus, which was opened by Christ for all? " says Messa in Latino.
But Christ makes it possible that from Saul there can always be a Paul. And so it was that old Msgr Manganini, from whose mouth now came the words, which are a cause of real "astonishment":. Introibo ad altare Dei. Ad Deum qui Laetificat Juventutem meam.
Msgr. Manganini was ordained a priest on 21 June 1958 by the then Archbishop of Milan, Giovanni Battista Cardinal Montini, the future Pope Paul VI.  even in traditional Ambrosian rite.
Text: Giuseppe Nardi
Image: Chiesa e postconcilio
Trans: Tancred vekron99@hotmail.com
Link to Katholisches...
AMDG
Posted by Tancred at 6:58 PM

Wow! The Holy Spirit at work.

WOW!! Keep up praying for all these guys!

Deo gratias! And may Msgr Manganini be blessed for his humility.

"Traditional believers are ... still showing honor to him..." Respect for authority, even when it is abused, is one of the marks of a believer in the Catholic Faith. Others include longanimity, prayer for persecutors, rejoicing at conversion and unshakeable hope that "Christ makes it possible that from Saul there can always be a [Saint] Paul." Deo gratias!

Dear Father: Respect for abusive authority is not a mark of a believing Catholic but a dangerous, pious myth that allows bad persons to perpetrate their evil doing. Aquinas tells us that an evil law is no law at all and forsakes our obedience; the same principle applies to those who abuse their authority. What you suggest is a fairly common warping of the noble virtue of obedience, contrary to right reason, and more worthy of cult followers than of the followers of Christ, Second Person of the Trinity. The fact that Christ submits Himself to the authority of Pilate, and hence of Caesar, is not a valid parallel as Pilate is following Jewish custom and Roman imperial practice---in this instance authority is not being abused but allowed its course for the sublime end of the Redemption.
I lament to disagree with you, but what you suggest (with the best of intentions) is precisely what has allowed the Modernists to impose their new, heretical religion on faithful Catholics. Respect for authority is not an absolute virtue or an absolute duty, but qualified ones: he who abuses his authority---whether of human or divine origin---loses that authority and has no claims to our obedience as truth and justice are indeed absolute imperatives. Anything else is blind obedience, given by pagans to oracles and by groupies to their cult leaders. Such is eminently unworthy of a true Catholic. RC

I am just wondering whether Fr. Anselm Marie, OSB, might not be another incarnation of "Gabriel" aimed to shut us all up in the name of authority (the Modernist ruse since Vatican Council II), but now couched in the form of spiritual advice from a cleric who would automatically command our respect? Perhaps not. Just wondering. Archimago

Perhaps the monsignor in question has had a taste of his own injustice and has tasted how bitter it is; or perhaps the brazen example of Francis's abuse of authority to attack the Faith on an almost daily basis has brought upon him an epiphany, even a metanoia. As far as I can see he has not expressed public regret for his very public abuse of his position in persecuting and humiliating the traditional Faithful---an admission which is his duty---so let us not, while not holding bitter grudges, rush to his glorification simply because he has offered the Mass of his ordination. It was his duty to do so, even after the dubious Novus Ordo, and he should make a public and humble acknowledgment of his abuse of authority and the mistreatment of the Faithful. No hero here for me---enough of this nauseating clericalism. Archimago

St. Thomas a'Becket, pray for us.

Thank you very much for such thoughful replies, clearly the fruit of long reflection upon the meaning of authority in times of scandal and crisis. It is good to see that you refer to Saint Thomas Aquinas, an excellent example of right reason, virtue and respect for authority. There is much that could be learned from him. I would be grateful if you would join me in praying for his intercession, for those in authority and for us, that we may all return to and persevere in the true Catholic faith.

Respect for authority (even when abusive) doesn't mean agreeing with what the authority in question says out command, but respecting the office he holds.