Venice: Art Historian Protests Against "Mosque" in the Church and Calls the Police

(Venice) In  ongoing Venice Biennale, unbeknownst to the Patriarchate, a Catholic church was converted into a mosque (see Venice Biennale: Mosque installed in the church - "Invitation to Islamists to Conquer" ). During the Patriarchate protested with explanations,  the Catholic art historian Alessandro Tamburini, professor at the Institute of Religious Studies, engaged in  a far more efficient sign of protest.
The tax-financed "artwork",  a contribution from the Republic of Iceland to the art exhibition, has been used since then  by  the Muslims of the area as a mosque. Moreover, Muslims have usurped the church and "artwork"  and taken control of the building.
The "interaction" is welcomed as an "invitation to dialogue" by the Swiss artist and the Icelandic Minister of Culture. Neither the state nor the Scandinavian artist has expressed a word of apology or regret for the profanation of the Catholic Church of Santa Maria della Misericordia - Catholic churches are in contrast to Islamic mosques consecrated places. The Catholic Church seems to have a fictional duty which is put forward as a  matter of course, that it does not even need a mention.
The Patriarchate raised strong protest against the abuse. The fact that the church has been privately owned since the 1970s, complicates matters and limits the intervention of the competent diocese. 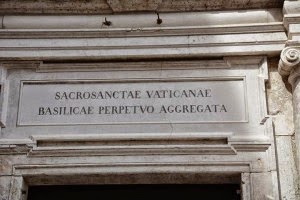 Inscription Above the Door of the Venetian Church, Which Was Converted into a Mosque
Alessandro Tamburini a religious scholar who is well-known in academic circles religious scholar  wanted to look at the "scandal" in person. At the entrance to the church, recte for "work of art", he was stopped by Muslims and asked to  take off his shoes, because he was setting foot in  "a mosque."  When Tamburini refused because it was not a mosque, but a Catholic church, he was denied entry by the Muslims. Tamburini called the police on the spot and made it  publicly clear that this is an abuse and an attack against the Catholic Church and Its believers.
"Professor Tamburini made his courageous decision as an example of how to react in such situations of more or less veiled attacks against Christianity in the context of legality," said  Messa in Latino .
Tamburini lives in Venice and teaches art history of Antiquity and the Middle Ages. Foreign friends had informed him that they were refused entry to the "Icelandic Pavilion" of the Biennale, because they had refused to take off their shoes. Tamburini went on site to his friends and tried to enter the "Pavilion", where he was filming the entire process.

"Is This a Center of Worship? Respect for Whom and What" -  Iceland Refused to Say

"I was denied entry because I refused to take off my shoes. I asked the following question: which is this a center of worship? They agreed and denied me admission, out of respect. I asked, therefore, respect due to whom  and what: Because of the perhaps too expensive carpet? Or because it is an Islamic place of worship? Inside are  praying Muslims apparently. Or because it is a Catholic place of worship? Removing the  shoes is an act of worship. If this is an art pavilion, then this forced  action is severe. Who wants to visit a mosque of cultural or artistic interest in an Islamic country, will be adapted to the necessary rules, conversely, whoever in Italy wants to visit a church. But this can not apply for an art exhibition, which tends to be thought of as a provocation, for which the artist Büchel is indeed well known," said Tamburini.

"What right have Icelanders in Venice to ban access and convert churches into mosques?"

Reporters said Tamburini then: "It is to be rejected and condemned, that the fundamental rights of a citizen of this country can be restricted by Muslims and pseudo artists who encourage surely neither respect nor dialogue but unnecessarily provoke divisions and tensions. The headlines these days in the media speak for themselves: the sharp observations of patriarchy, because a church was converted into a mosque without permission. In addition, I did not know which authority would have the Icelanders to ban Italian or foreign citizens the access to a public place. And what right have the Icelanders to convert a church into a mosque in Venice? Because a mosque is in every respect. Muslims pray in it, forcing their rules keep them occupied in fact. They have already announced plans to celebrate in, Pavilion 'Ramadan. If this place of worship allowed by the prefecture? If the Treasurer informed? The city administration? I called the police and filed a complaint. " 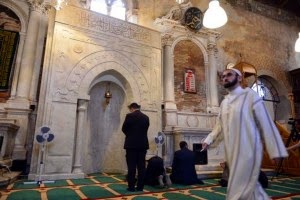 Meanwhile, the Muslims have usurped a church with Icelandic assistance "on behalf of the freedom of art" and want to celebrate in Ramadan
After the art historians sharp words, and engaging the police lengthy discussions, the Icelandic director of the "Pavilion" granted Tamburini an "exceptional" permission, and was allowed to wear shoes to enter the building.  "I refused, because it was not just about my rights. Numerous other people  had already been banned access and the same thing would happen to me again. Above all, they refused to respond to my questions: Is this a religion? Respect for what and whom? Because of an obligatory attitude of refusal  they do not encourage dialogue, but provoke and cause division."
Tamburini continued: "We owe respect to  Muslims and the Icelanders, who are guests in our country. I share the opinion of the Patriarchate and can only regret that it is precisely a city like Venice, which has always historically been  a meeting place of different cultures and religious traditions, has become the scene of such a lack of respect for the identity of others, which has happened to us. Respect demands that you first knock on the door before it opens. Icelanders and Muslims have no respect and without asking permission, converted a church into a mosque. On this basis, it is difficult to engage in interreligious dialogue. The pseudo-artists are known for the fact that they do not ask. Islam is well known for the fact that it does not ask for permission. All the more surprising that the Icelanders still promote such an attitude."
Icelanders have the disrespect to convert a  church dedicated in a foreign city in which they are guests, and to transform it into a mosque, but the Icelandic pavilion director refuses to answer  Tamburini's question whether the pavilion is a place of worship and, if so, whose religion. "Because they misuse a Catholic church, therefore a place of worship, they dare not to answer this question, because by what right could they demand respect for a Muslim place of worship, if you have just desecrated a Catholic place of worship," said Tamburini , "I expect that the prefect and the competent public authorities will protect the Italian Constitution and the rights of Italian citizens."
Meanwhile, the art historian is filing a legal complaint against the owner of the church and the organizer of the Biennale.
Text: Giuseppe Nardi
Image: Milo
Trans: Tancred vekron99@hotmail.com
Link to Katholisches...
AMDG
Posted by Tancred at 7:53 PM

Can it be that the Icelandic government sold out to the Saudis (or whoever) as a consequence of the banking crisis? Is the private owner, or a silent owner or partner a Saudi? What possible interest could the Icelandic Government have in a closed Catholic church miles away?

As if they'll tell us.

You gotcha, that's the way things are and soon muslims will have in Venice a mosque by their own, paid by Saudi Arabia, may be lesser than the Roman one, but they will, sooner or later......end of Europe, welcome to Eurabia, shaarìa for everyone and dhimmitude. May the Christian God have mercy on us poor sinners!

I hope the Muslims are asked to leave permanently. I am glad to know that the Patriarch of Venice, Archbishop Moraglia (denied the right to a Cardinals' red hat 2x by desigin..by Francis and company) was unaware of this. I am certain he would not allow a Catholic church (even unused) to be desecrated as it is by those who have no real right to even be there in the first place.

"The fact that the church has been privately owned since the 1970s, complicates matters and limits the intervention of the competent diocese."

How did the church become private property? Is it the owners' right to hand over control of the church to the art organization and the muslims? Shouldn't the art historian run after the owners? Can he sue them?

So many questions raised by this report.